The science behind COVID-19
EducationalVideosMeaslesCross-posts

Why do measles survivors get sicker?

Scientists wanted to find out about the long-term effect of measles on the immune system. Scientific article for students. 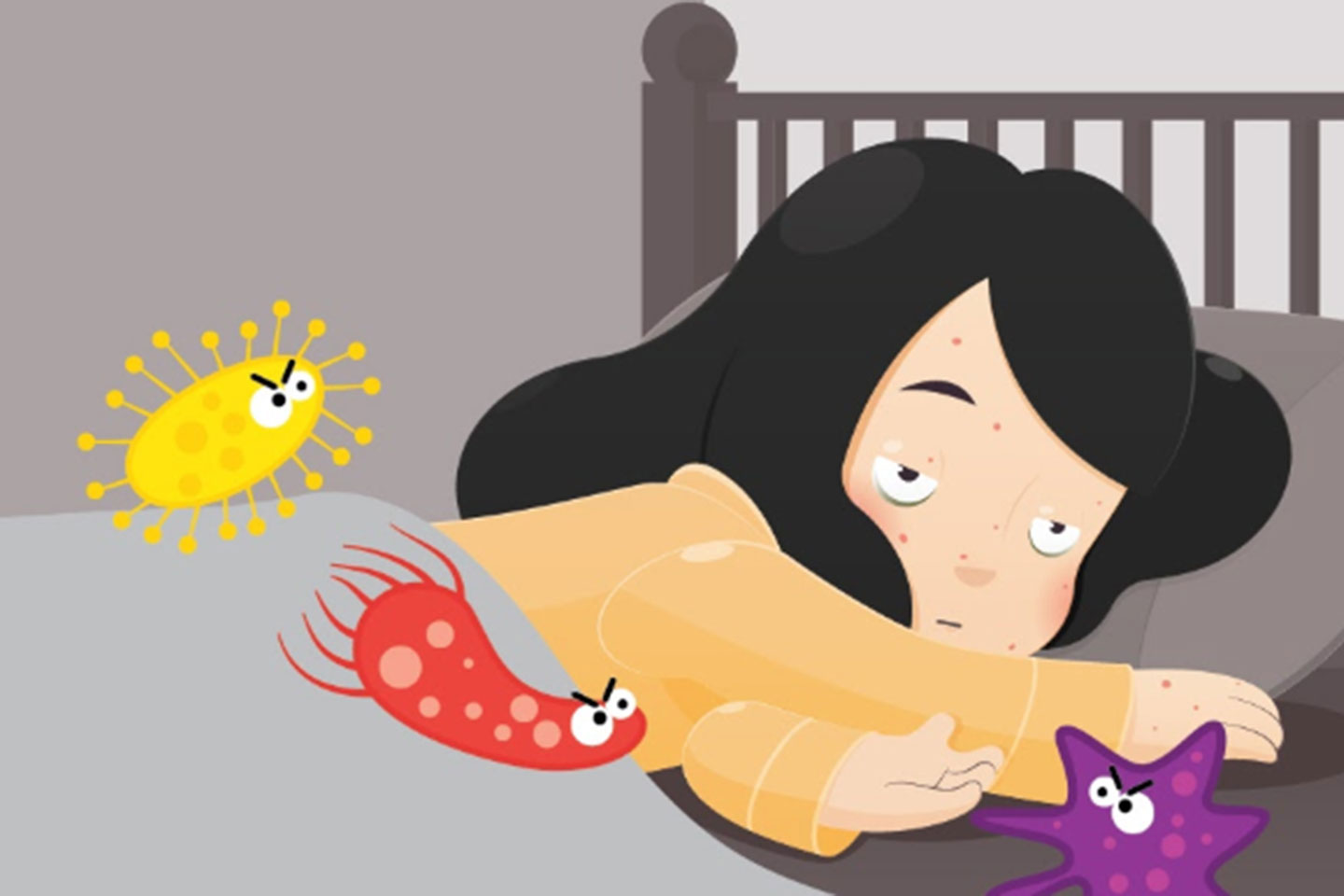 Measles is one of the major causes of death among children (Fig. 1), even though there is a safe and effective vaccine against it. In fact, because fewer people have been getting vaccinated, the number of people dying from measles is increasing. Even if those who catch it survive, they tend to get sick more often than those who have never had the virus. Why is that? 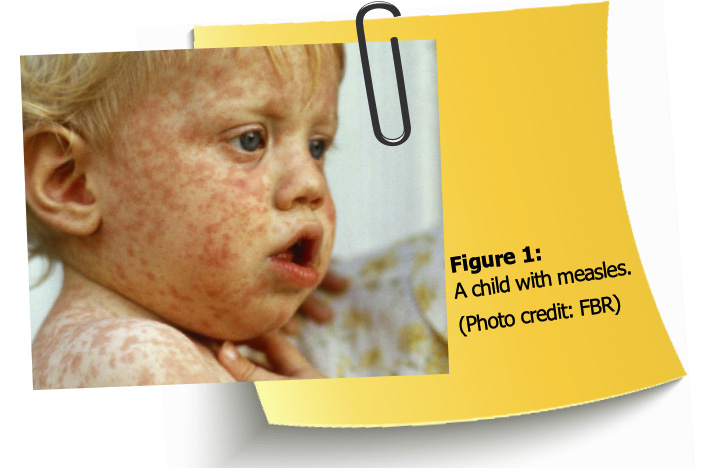 We wanted to find out about the longterm effects of measles on the immune system — perhaps they would hold the answer. We collected blood samples from 77 unvaccinated children before and after they got infected with the virus during an outbreak in the Netherlands. We tracked the changes in antibodies (the particles that fight off pathogens) in the children’s bloodstream. We found that measles wipes out up to 73% of these antibodies, leaving the children unprotected against other diseases for months, and sometimes years. These findings further show the importance of vaccination.

Have you ever heard of measles? It’s one of the most contagious viral diseases out there. It’s a bit similar to chickenpox: you get high fever and a rash on your forehead and body. Unlike chickenpox, it doesn’t itch. But there are other symptoms — measles can lead to complications that can be extremely damaging and even fatal. In fact, measles is still one of the major causes of death among children even though there is a safe and effective vaccine against it. In some countries, fewer people are getting the vaccination than in the past, which led to over 140,000 measles deaths across the globe in 2018. Those who survive the disease also get sick more often in the years following infection — adding another level of risk.

Why is this? The measles virus attacks the cells in your immune system which fight off diseases and infections. Moreover, some of the immune cells have the ability to remember the infections you’ve had. So if you meet the same pathogen again, these memory cells recognize it and cause your body to produce a lot of antibodies to stop you from getting sick.

We know that measles survivors get ill more often after having the disease, so we wanted to find out if measles reduces immune memory.

We needed to take blood samples from children before and after they became infected with measles. But how could we know which children would get infected in the next outbreak? Here is how we found our sample population:

1 We undertook a study that predicted who would come into contact with measles during an outbreak.

2 We identified a couple of schools in the Netherlands where many parents didn’t have their children vaccinated — these children would be most at risk during the next outbreak.

3 The parents of 82 unvaccinated children allowed us to take a small blood sample from each child.

4 During the next outbreak, 77 of those children (94%) did, in fact, get the disease. (The percentage is very high because measles is extremely contagious).

5 We then took blood samples from these children about 2-3 months after they recovered from the infection.

6 We also compared these samples with samples taken from a few different types of control groups. (See Figure 2 for information about the control groups). We also performed an experimental infection of four monkeys and examined their antibodies before and after the infection. To measure the type and number of antibodies in the blood, we used a technique called VirScan – it quickly and accurately detects antibodies against more than 400 viruses and some common bacteria! 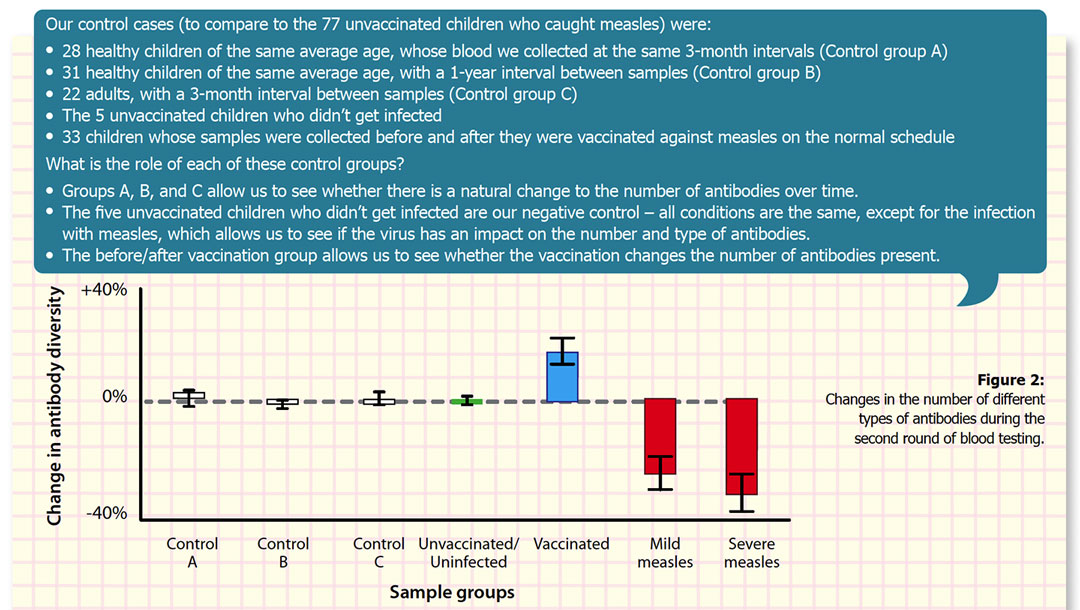 Measles is actually even more dangerous than we previously thought (and we already thought it was very dangerous). When the virus erases parts of our immune memory, we become vulnerable to many infections which we have previously overcome. Our study shows that regaining our antibodies takes months and sometimes years, during which we are extra vulnerable. The experimental infection of monkeys confirmed this. So measles doesn’t just kill 140,000 people in a year – many additional people die from illnesses later on, due to a weakened immune system.

The good news is the measles vaccine doesn’t have this negative effect on our immune system. Instead, it provides us with protective antibodies so that we won’t suffer measles. Our findings emphasize the importance of measles vaccination. The World Health Organization recently reported that this vaccine has prevented more than 21 million deaths in the past two decades, and our findings suggest that the number is possibly much higher.

A small minority of people avoid vaccinations because they believe that vaccines present too much risk. However, countless scientific studies have shown that vaccination is not only safe but also very important! In fact, vaccination already eradicated one of the deadliest diseases among children – smallpox.

There are still some dangerous diseases out there, such as measles, polio and rubella. With vaccination, we can easily prevent and possibly eliminate them — saving even more lives and saving ourselves serious pain and injury. That’s why it’s important to follow your vaccination schedule.

Antibodies – proteins which can recognize a part of a virus or bacteria. Antibodies can neutralize this target directly or they can tag it for further attack by other parts of the immune system. For example, if you have Hepatitis A as a kid, you develop antibodies against the virus and you won’t get it again.

Contagious – we say that a disease is contagious if it can easily pass from an infected person to another person who is not immune to it. Measles is very contagious, and can easily spread – through the air or through contact via a surface like a cup.

Eradicated – This means a disease has been completely wiped out and will not cause sickness or death ever again.

Experimental infection – healthy organisms (usually animals) receive a pathogen so that scientists can research a disease.

Immunity – the ability of the body to recognize and fight a disease so that you don’t get sick from it.

Outbreak – a sudden and fast increase of people getting a particular disease which then quickly spreads through the population.

Pathogen – a virus, bacterium or another microorganism that can cause disease in another organism. For example, HIV, which causes AIDS in humans, or Vibrio cholerae, which causes cholera in humans.

Vaccine/Vaccination – an injection of a killed or weakened pathogen, in order to stimulate the immune system against that pathogen - without you having to get sick. This means that the immune system can recognize those pathogens if they ever come back, and destroy or disable them, preventing disease.

VirScan – a technique which screens your blood for antibodies against hundreds of different viruses and other pathogens.

1 What is immune memory?

2 If a person has received a vaccine against polio, does it mean they have antibodies against it?

3 Measles destroys a lot of a person’s antibodies for other pathogens. What impact does that have?

4 What is the impact of the measles vaccine on the immune system?

5 How were we able to collect blood samples from children who then went on to catch measles, before they were infected?

Why do measles survivors get sicker?