The virus appears to attack support cells at the back of the nose, but “smell training” may help people to recover their missing sense. 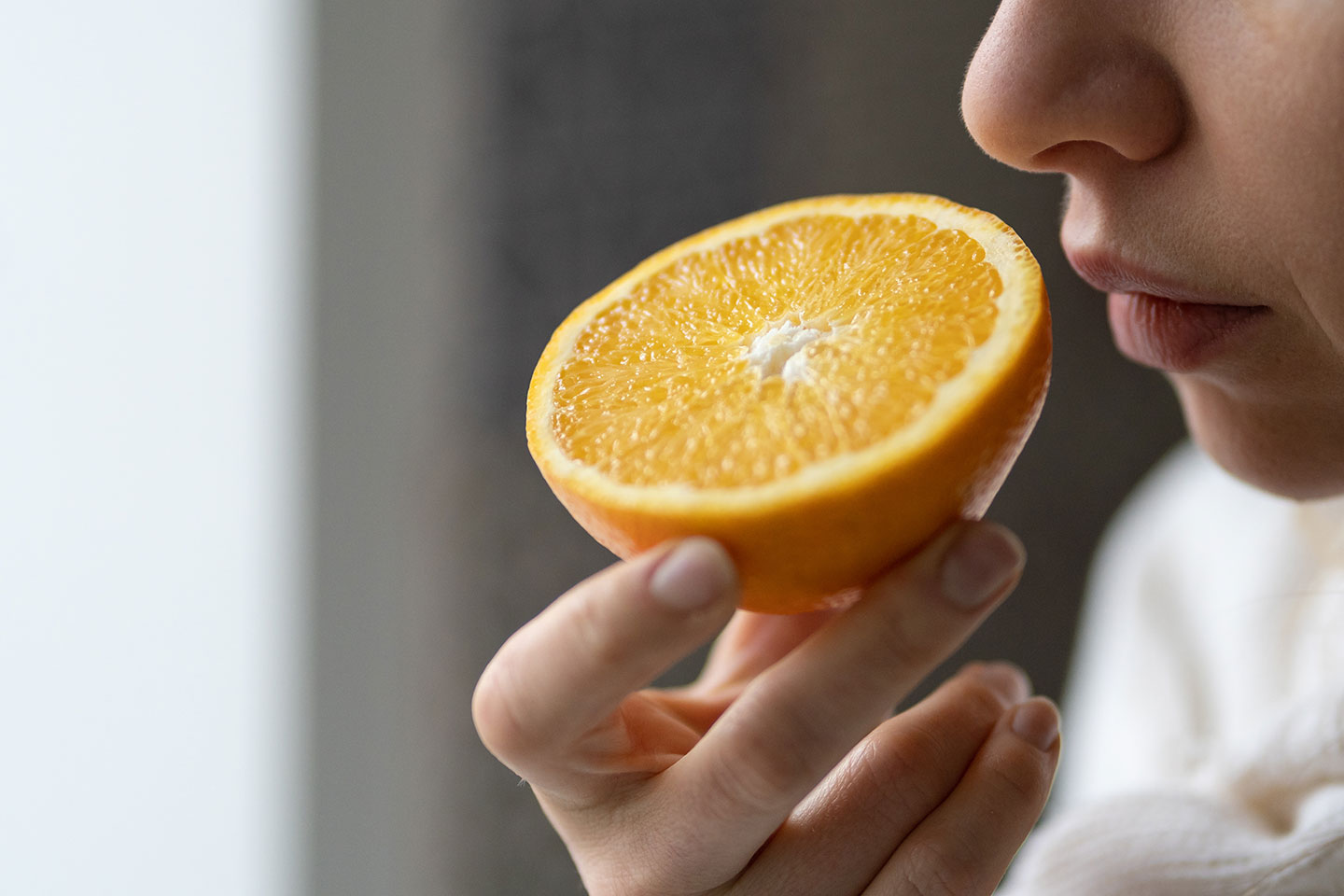 Loss of smell and taste – one of the main signs of the disease.

Loss of smell is a strange and distinct feature of COVID-19, so much so that it is considered a better predictor of whether someone has been infected than other common symptoms, such as fever or coughing. Studies suggest that up to half of infected people temporarily lose their ability to perceive smells, although this may be as high as 67% in those with mild to moderate infections – possibly because they tend to be younger, and may be more sensitive to altered olfactory perception.

The good news is that various studies have suggested that for people whose olfactory perception has been damaged after a viral infection, repeated short-term exposure to smells can help them to recover.

The way we sense odours is through a cluster of nerve cells called “olfactory sensory neurons”, which are located high up at the back of the nose in a structure called the olfactory bulb. These neurons have tiny hair-like projections which extend out into the mucous-covered nasal lining and respond to odour molecules that we breathe out through our noses.

Early in the pandemic, scientists feared that SARS-CoV-2 might be triggering smell loss by infecting these olfactory neurons and then making its way into the brain, where it might cause lasting damage. Further research revealed that these neurons lack the ACE2 receptors the virus uses to infect cells, but they are found on support cells in the nasal lining which interact with these neurons.

The job of these support cells – called sustentacular cells – is to maintain the balance of salt ions in the nasal mucus, which the neurons rely on to send signals to the brain. They also provide structural and metabolic support to the olfactory neurons. A recent study in hamsters suggested that it was these support cells that SARS-CoV-2 invaded, rather than the olfactory neurons, and that this prompted a massive infiltration of immune cells, followed by a disruption to the normal organisation of the nasal lining, including the loss of the hairlike projections that the neurons use to detect odour molecules.

The good news is that they also found that the nasal lining began to rebuild itself after around 14 days – although, because it’s difficult to gauge how much a hamster’s sense of smell has returned, it is not clear how long it took them to completely repair the damage.

Human studies are yielding some answers, however. One recent study, which tracked the health of 2,428 individuals who claimed to have lost their sense of smell and/or taste as a result of COVID-19, found that 40% of them had completely regained their sense of smell six months later, while only 2% reported no improvement at all. A separate survey suggested that recovery may be faster than this for many individuals, with 71.8% reporting a return to “very good” or “good” smell after one month, and 84.2% reporting a return to “very good” or “good” taste.

Loss of taste - another symptom of COVID-19 - is harder to assess, because most studies rely on patients self-reporting their symptoms, and some of what they perceive to be taste loss may be the result of smell loss. Flavour perception is heavily influenced by our sense of smell, which is why holding your nose can make unpalatable foods easier to swallow. However, in the former study of 2,428 individuals, only 3% of them reported that they were still unable to discriminate between sweet, sour, salty, bitter and umami – tastes which are directly sensed by taste buds on our tongues – after six months.

During recovery, some people also report a distorted sense of smell, or “parosmia”. For instance, many people who are recovering from COVID-19 report smelling a foul, rancid odour. Disgusting as this may be, it is usually a sign that your nerve cells are recovering.

The good news is that various studies have suggested that for people whose olfactory perception has been damaged after a viral infection, repeated short-term exposure to smells can help them to recover. Smell loss charities recommend picking four scents that you enjoy or have a connection with, and actively sniffing them twice a day, spending around 20 seconds on each scent. Ideally, you should try and pick scents which represent the four categories of flowery, fruity, spicy and resinous – and you could either use essential oils or the actual substance they derive from.

For instance, if you chose lemon as one of your scents, you could use some grated lemon peel. While sniffing the substance, focus your thoughts on lemon and try to recall what your experience of lemon was.

It’s not an immediate fix, but over time this should help you to recover your lost sense of smell.