Owning it: how targets can help countries vaccinate to save lives

Dorothy Esangbedo, the President of the Union of National African Paediatric Societies and Associations (UNAPSA) and a member of the Executive Committee of the International Paediatric Association (IPA), and Amy Whalley is Head of Policy Advocacy at RESULTS UK.

Basic immunisation is still inaccessible to 1 in 7 children, and, over the last five years, improvements in global immunisation coverage rates have only increased incrementally. Yet, just six years ago, all countries agreed to reach 90% coverage of the basic vaccine package by 2015. So far, 68 countries are not reaching the target, and since 2010, the vast majority of these countries have not made improvement toward achieving it. Why does there remain such a large gap between commitments and action?

This target, along with many others are set out in the Global Vaccine Action Plan (GVAP). But how can global goals, which are so easily missed, really drive change on the scale we need to see it? The GVAP sets out six principles that were supposed to do this and allow countries to realise the full benefits of immunisation to all people, regardless of where they are born, who they are, or where they live.

One of these guiding principles relates to the need for ownership of immunisation systems. Immunisation is a core part of primary healthcare, and plays a key role in strengthening the whole supply infrastructure and care system. With approximately 30 vaccines delivered every second, this is 30 points of contact a child and their wider family has with the health service, with the opportunity to be checked and treated for a number of other health concerns. However, it will only reach its full potential if governments show leadership and political will in committing to the full financing and delivery of the routine immunisation programme through country ownership.

Country ownership requires three distinct elements. Firstly, it must start with high level political commitments to improve immunisation rates at all levels of government. Secondly, sustainable domestic financing must also be a priority to support the continuation and improvement of services, particularly at a time when financial support from donors is changing. Finally, improved policy and programme implementation with a focus on equity is essential to reach all children with WHO recommended vaccines. Political commitments and domestic financing will be pointless without the technical capacity to turn ambitious commitments into action.

There are critical roles for civil society, the donor community, and technical partners to play. Donors and technical partners must support this process through sharing skills and building government capacity, ensuring that changes in critical financing streams don’t take place until certain coverage levels have been reached. Civil society and parliaments have an equally important role to play in holding their governments to account, ensuring funds reach the right places and that all children are reached. 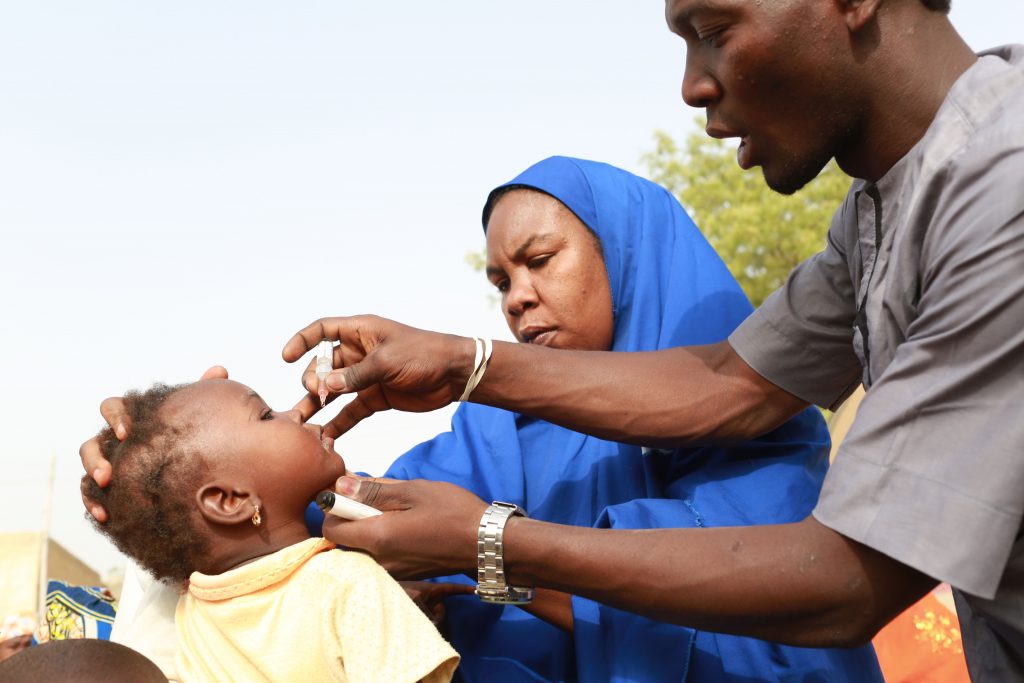 The importance of these three elements combined can be clearly seen in Nigeria.

Nigeria is a lower-middle-income yet conversely also has one of the world’s lowest immunisation rates. Nearly half of all children aren’t immunised. It is within the top 10 countries which make up the global majority of unimmunised children and has consistently had problems with subnational inequalities.

Since 2000, Nigeria’s immunisation programme has been largely supported through investment from Gavi, the Vaccine Alliance. This year Nigeria enters a new phase of support from Gavi, beginning a five-year process towards fully self-financing its own routine immunisation programme. Government expenditure on routine immunisation has recently risen from 24% to 40%, but, given the number of unimmunised and under-immunised children, there are serious concerns about significant gaps and risks of regression when support from Gavi ends in 2022.

The eight years of violent insurgency in north-eastern Nigeria has further challenged the health system in Nigeria resulting in further escalating logistical and financial needs. An outbreak of wild polio virus occurred in the summer of last year, and an ongoing measles outbreak across the country is underscoring the need for the Government to scale up routine immunisation efforts. Imagine the frustration when mothers spend money on transportation to visit a health centre, only to find the clinic has run out of the vaccines because of government shortfalls, leaving their child unimmunised and vulnerable.

Targets and soundbites have never been enough to save lives, and they alone won’t solve challenges like Nigeria’s. But when these goals are backed by the highest levels of political leadership and translate into investment in stronger services, they can ensure that children do not continue to suffer unnecessarily from vaccine preventable diseases.

You can read more about political leadership and country ownership in RESULTS’ recent publication “Owning It: Turning immunisation commitments into action.”