The science behind COVID-19
COVID-19EducationalExplainerVaccine safety

Are COVID-19 vaccines safe for teenagers and children?

Some countries are already offering COVID-19 vaccines to teenagers and may expand this to children in the near future. Here’s what we know about vaccine safety and efficacy in these groups. 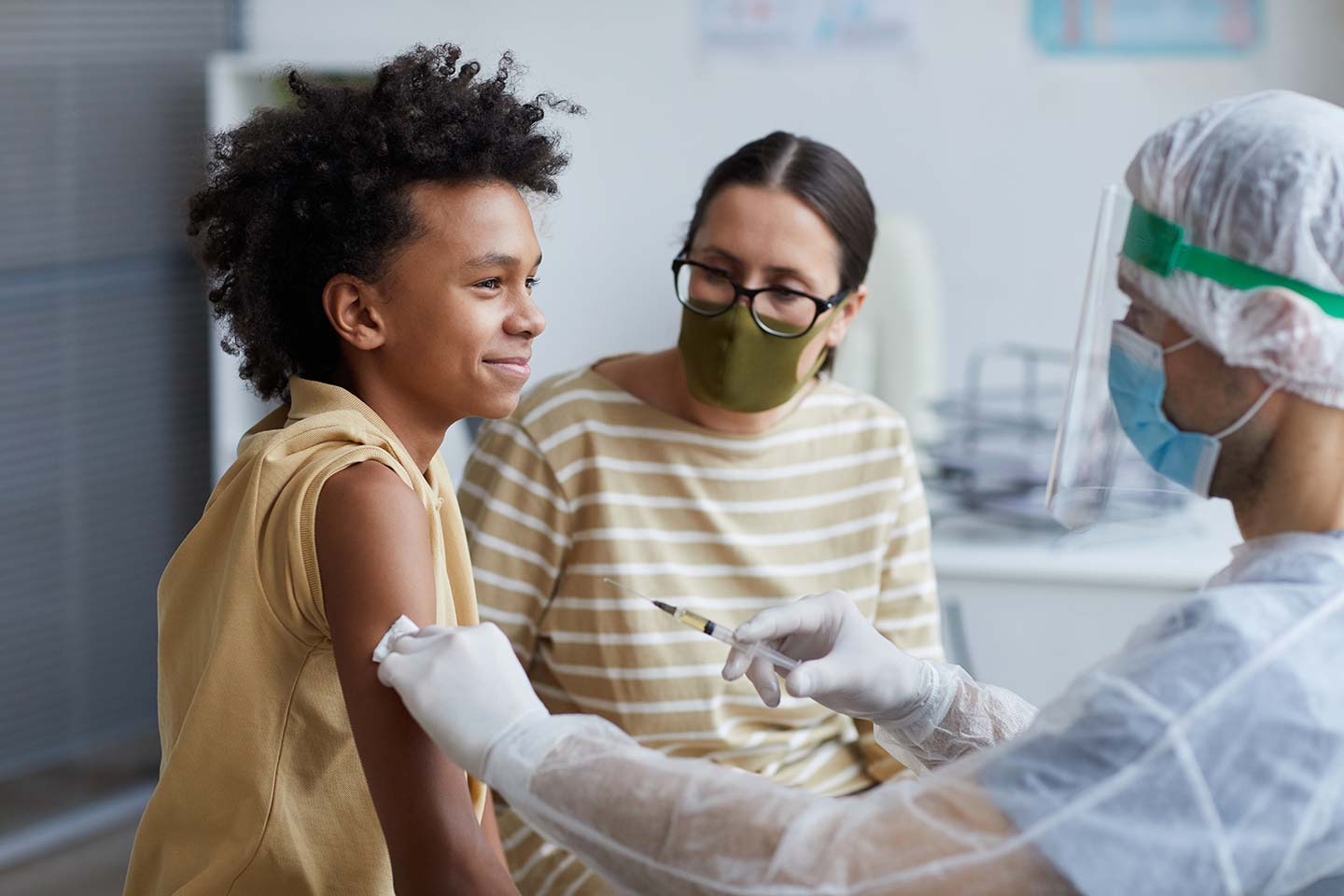 Although globally many adults still haven’t been vaccinated against COVID-19, plenty of countries are already vaccinating teenagers, while the United States is expected to begin offering the Pfizer/BioNTech vaccine to 5- to 11-year-olds within weeks.

Most healthy children and teenagers aren’t at high risk of serious illness if they catch COVID-19, so some parents may be questioning the benefits, given that any vaccination carries a small risk of side-effects. Here’s what we know about those risks and benefits so far.

One in fourteen 12- to16-year-olds in England is currently infected, due to most COVID-19 restrictions having been lifted and relatively few teenagers having been vaccinated. This situation is likely to play out elsewhere as a growing proportion of countries’ adult populations are fully vaccinated.

Why vaccinate children and teenagers?

Although the personal risk to younger people from COVID-19 is very small, it is not absent. Some do end up in hospital with respiratory failure, heart inflammation, kidney failure, blood clots or other complications related to COVID-19. A very small proportion will develop paediatric multisystem inflammatory syndrome (PIMS), which can lead to organ failure and shock – a life-threatening condition in which the body’s tissues are starved of oxygen. There is also the risk of developing “Long COVID”, which appears to be more common – with 1.8% of school-aged children having symptoms lasting at least 56 days, according to one large study of children in the UK.

Vaccination helps to protect against infection, without exposing children and teenagers to these risks. The immune response triggered by vaccination is also more consistent and predictable compared to that following natural infection, where some people fail to generate high levels of protective antibodies. If someone has already been infected, vaccination is likely to further strengthen that immune response.

Real-world data from Israel, where many 12- to18-year-olds have also received the Pfizer/BioNTech vaccine, suggested that the immune protection it generated was similar to that seen in adults. The study found that it was 93% effective against symptomatic COVID-19 seven to 21 days after receiving a second dose.

According to separate data released by Pfizer on 22 October, their COVID-19 vaccine showed 90.7% efficacy in a clinical trial of 2,268 children aged 5 to 11 years old. The children were given two shots of a 10-microgram dose of the vaccine, a third of the dose size given to those aged 12 and older.

However, vaccination isn’t just about protecting the individual. In countries with high rates of COVID-19 vaccine uptake, such as the UK, the virus is now predominantly circulating in children and teenagers. One in fourteen 12- to 16-year-olds in England is currently infected, due to most COVID-19 restrictions having been lifted and relatively few teenagers having been vaccinated. This situation is likely to play out elsewhere as a growing proportion of countries’ adult populations are fully vaccinated.

There’s mounting evidence that reinfections can, and do, occur and that children’s immune response to natural infection is weaker than that of adults. Allowing the virus to rip through children and teenagers is therefore unlikely to result in herd immunity and infections simply fizzling out.

A high infection rate among children and teenagers is risky for two main reasons. One is the risk of them transmitting the virus to other, more vulnerable members of society who either haven’t been vaccinated or whose vaccine-induced immunity is incomplete or starting to wane.

Also, the more individuals the virus is allowed to infect, the greater the chances of it acquiring mutations that make it even more infectious and/or resistant to the immune protection triggered by the current vaccines.

Vaccination doesn’t entirely protect individuals against infection or transmitting it to other people but it significantly reduces the chances of this happening, particularly when combined with other measures such as ventilation, physical distancing, masks, and good hand hygiene. Children, depending on their age, are less likely to practise these measures, meaning the likelihood of infection is higher.

Which vaccines have been authorised, and for which age groups?

Most countries that have begun rolling out COVID-19 vaccines to 12- to 17-year-olds are using the Pfizer/BioNTech vaccine, although some European countries are also using the Moderna vaccine. The United Arab Emirates has authorised the Sinopharm vaccine, and Indonesia the Sinovac vaccine for 12- to 17-year-olds. China has approved emergency use of Sinovac’s vaccine for children aged 3 to 17.

Meanwhile, the US is preparing to roll out the Pfizer/BioNTech vaccine to children aged 5 to 11, assuming it is authorised by the Food and Drug Administration and recommended by the Centers for Disease Control and Prevention. This decision is expected within weeks. The European Medicines Agency has also started evaluating an application to use the Pfizer/BioNTech vaccine in this age group.

Global supply constraints mean that high numbers of more vulnerable health workers and older persons in lower-income countries are still yet to receive their first dose of COVID-19 vaccine, raising ethical questions about these decisions. However the risks and benefits of vaccination for children from a safety and efficacy point of view have been rigorously tested.

How safe are these vaccines in adolescents?

Globally, most adolescents who have been vaccinated have received the Pfizer/BioNTech vaccine. Although some side-effects have been reported, for the vast majority these have been very mild, with around half to two thirds of US adolescents reporting injection site pain, fatigue, headache, and muscle pain – usually the day after the injection. A third reported a fever in the week after the second dose, while about one-quarter reported they were unable to perform daily activities the day after their second vaccination.

According to postmarketing safety monitoring data collected on 8.9 million US adolescents aged 12 to 17 between December 2020 and July 2021, there were 9,246 adverse events reported during this period – equivalent to 1 in every 1,000 recipients. In 90% of these cases, these reports related to non-serious symptoms – most commonly dizziness, fainting, nausea, headache, and fever.

During this period, 863 serious adverse events were reported – the most common being chest pain; increased levels of a protein called troponin, which is a diagnostic marker of damage to the heart; and myocarditis, or heart inflammation.

Myocarditis or pericarditis (inflammation of the fibrous sac around the heart) was listed in 397 reports, with boys disproportionately affected. It is difficult to know what proportion of these cases were directly caused by the vaccine, if any, but this association is being investigated. No reports of death were the result of myocarditis.

Increased cases of myocarditis and pericarditis have also been reported during clinical trials of the Moderna jab (another mRNA vaccine) in adolescents, which the FDA is also investigating.

“In most cases, patients who presented for medical care have responded well to medications and rest and had prompt improvement of symptoms,” the CDC said. “Reported cases have occurred predominantly in male adolescents and young adults 16 years of age and older. Onset was typically within several days after mRNA COVID-19 vaccination, and cases have occurred more often after the second dose than the first dose.”

Chinese researchers have also published the results of a clinical trial of Sinovac’s vaccine in 550 three- to 17-year-olds. Of these, 27% reported at least one mild to moderate adverse event, with the most common being pain at the injection site and fever. Two children experienced severe fever.

Data from a trial of the Sinopharm vaccine in adolescents in the UAE have not yet been published.

What about safety in younger children?

Far fewer younger children have been vaccinated against COVID-19. However, on 20 September, Pfizer and BioNTech shared data from the Phase 2/3 trial of their COVID-19 vaccine in 2,268 children aged 5 to 11. The children received a third of the dose that is routinely given to adults and adolescents. A two-dose regimen elicited a robust immune response and was associated with a favourable safety profile, the companies said.