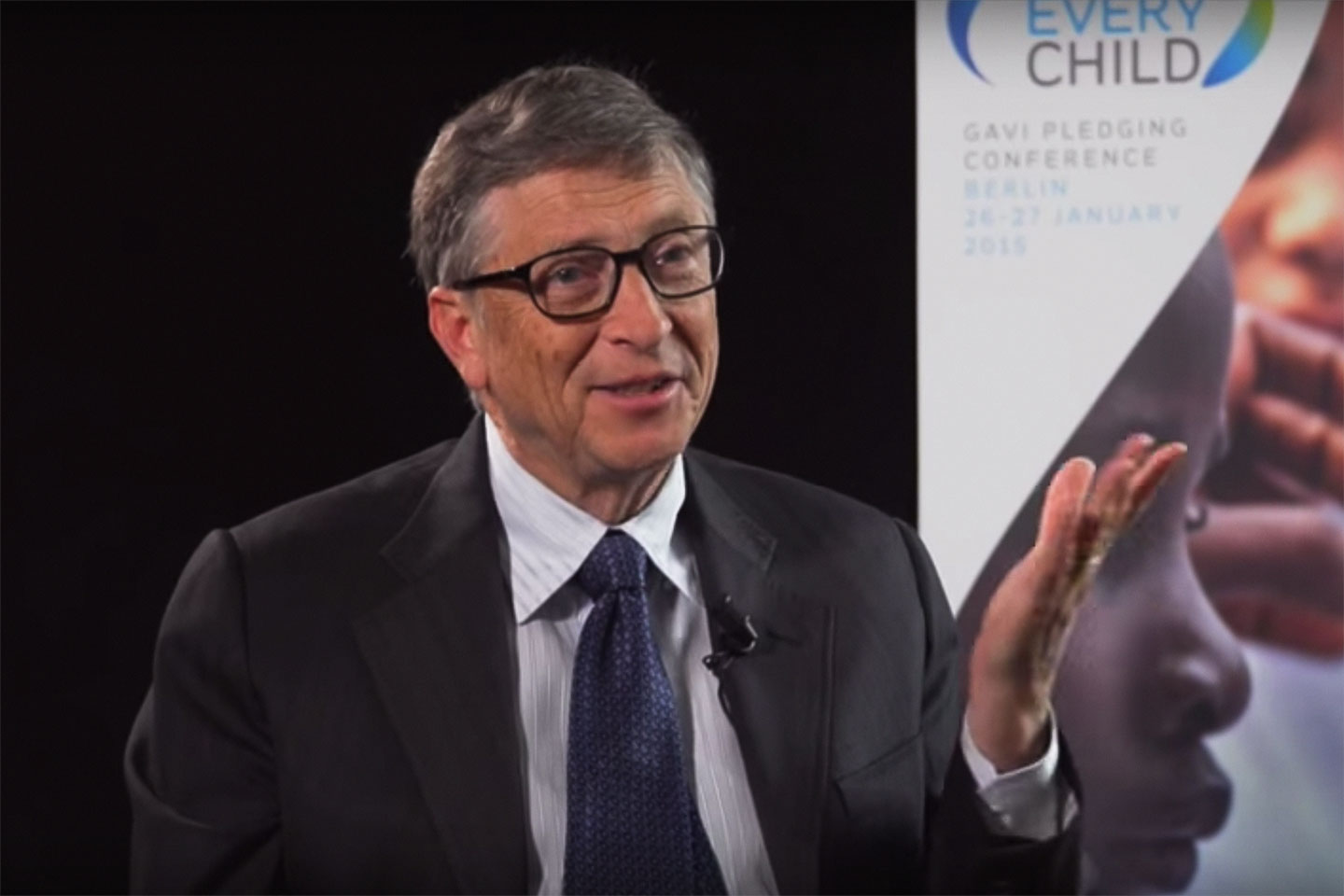 Bill’s words are taken from a face-to-face interview.

15 years ago, you made a big bet with Gavi. How do you think that’s paid off?

“The work our Foundation has done in vaccines through Gavi has been the most important thing that we’ve done. The very creation of the Foundation came about because we saw this great inequity, and we gave early grants for vaccines, but then saw there was something missing. So several people in global health, including the Foundation, decided that starting something to buy vaccines for the world’s poorest children was absolutely needed. And in the year 2000 that was announced as Gavi. So now we’ve had 15 years of incredible success: getting people to make new vaccines for poor world diseases, getting the prices down for those, getting them introduced and delivered. That’s why we’ve saved millions of lives, and every time people look at aid money and ask what’s the most impactful thing they can find in that whole space, Gavi gets ranked at the very top.

As Gavi enters this new phase of massive scaling up, what sort of impact do you think that will have on childhood mortality and poverty?

Gavi did a fantastic job in its first 15 years, particularly getting the pentavalent vaccine out to all the world’s children, and it started getting the most important diarrhoeal vaccine (rotavirus) and most important respiratory disease vaccine (pneumococcus) out. Diarrhoea and pneumonia are the two biggest killers of children. And in this next 5 year phase, we’ll actually finish the rollout of both rotavirus and pneumococcus vaccines to all the world’s children. So it’s a phenomenal thing – it’ll be the largest single contribution to reducing childhood death. Over the last 25 years childhood death has been cut in half, and the hope for these next 15 years is that we can cut it in half again. The biggest part of that will be getting these new vaccines out to the poorest children.

In terms of vaccines, what are going to be the most important diseases over the next five years?

Well the biggest diseases are diarrhoea, pneumonia and malaria, and it’s phenomenal that we have this highly effective vaccine for diarrhoea, highly effective vaccine for pneumonia. Typically, it would have taken 30 years from when those were used in the rich world to when they’d be used in the developing world, which is ironic because the risk of death is over ten times greater in the developing world, where the child’s nutrition and immune system is not as strong, and the ability to seek medical care is far weaker. What we’ve done here is taken that delay and basically gotten rid of it, saying that these vaccines should get out to poor children as soon as they get out to rich children. And we’ve had to make sure that the vaccine is targeted to the particular strains that exist in developing countries. That’s required a new way of working with manufacturers, and a new way of working with countries, trying to anticipate the supply and demand, fixing the cold chain, the overall management of the vaccine delivery system.

So we’ve come a long way in the past 15 years, but finishing these two new vaccines will be our most important thing. We’ll have other new vaccines that we’ll be putting into the mix, such as HPV vaccine, which is for cervical cancer, a first generation malaria vaccine that will get some coverage, and there’s a vaccine for polio that’s part of eradication and needs to be put into routine immunisation. So we’ll have a lot to do! One of the big focuses will be making sure that coverage levels get even higher.

You mentioned HPV. What sort of role do you think Gavi will play in improving women’s health?

HPV is a great example of why we need Gavi. HPV vaccine is now available in basically every rich country, and girls have the option of getting that vaccine. It’s fantastic – it means they don’t get cervical cancer. Now in rich countries, you can usually spot it, and take care of it. But in fact if you get HPV, the virus, in a developing country, the chance that it’ll be stopped is almost zero. You’ll get cervical cancer and a lot of those women will die. So HPV vaccine really belongs in developing countries. Now the work’s been done to get the price down and the volume up, to make sure the strains are right, to get the vaccine systems in each country able to add this. This one is a bit tricky because instead of giving it in the normal EPI schedule in which we give all the other vaccines, this one has been tested only to give to school age children. So we have to set up a new delivery system and make sure it has very good coverage. And that is a key project for these next five years. That’s our most important introduction for the next five years.

Gavi’s about to enter into a new phase with a large number of countries graduating. What do you see as being the big challenges during that phase?

Well it’s great news that the Gavi recipient countries are increasing their GDP per person, and in some ways that’s what this is all about – as you improve the health of a country, those kids are productive, they’re fully developed, they can be educated. And we want every country to be self-sufficient, and that’s happened in countries like South Korea and Mexico, and many countries that are now middle income countries. So we celebrate the fact that many of these Gavi recipients like Indonesia are growing their economies.

Now they have to plan ahead though, because over a period of years they have to take on the extra cost of the vaccine and unless they’re very smart about that, they won’t have the money there. It’s critical that we preserve coverage. We’ve made sure they still get the low prices that we’ve negotiated, but instead of Gavi paying for basically all of it, over the years it shifts where they take on most of that burden. So we’ve been sitting down with the ministries of finance in these countries talking about that five year period, and there’s some of these countries that are dependent on commodities, including oil, where their future revenues are a bit unclear. And the other donors at this time, like eligibility for concessional loans, are going away as income goes up.

So making sure this all goes smoothly, and that children aren’t hurt here by loosing vaccine coverage, we’re going to have to be very agile, very smart about that. Another important thing that we have to do right in the next five years.

Come 2020, what are your hope and aspirations for Gavi? Where would you like Gavi to be?

By 2020, we’ll have rotavirus and pneumococcus vaccines out there, and that alone will save about half a million lives a year. And even if the kids survive, the health and the physical and mental development of these kids will be far far better, because they won’t have had these diseases making them weaker and blocking their development. So that alone is just a phenomenal thing. We’ll have HPV vaccine on its way to being rolled out globally, that won’t be completed. The good news will be if there were a few new vaccines – a super effective malaria vaccine, a TB vaccine. We hope that science gives us that challenge, and the Gates Foundation funds a lot of that upstream research that creates these products that have this huge impact. I hope we’ve managed to get coverage levels up in important countries, I hope we’ve shown we know how to do graduation and handle it well. We will have made the biggest single contribution to the reduction of childhood death, and even childhood malnutrition, through not having kids suffer from these diseases.