Can dogs be trained to sniff out COVID-19?

Various countries are training dogs to detect coronavirus, and the results of early clinical trials are looking promising. 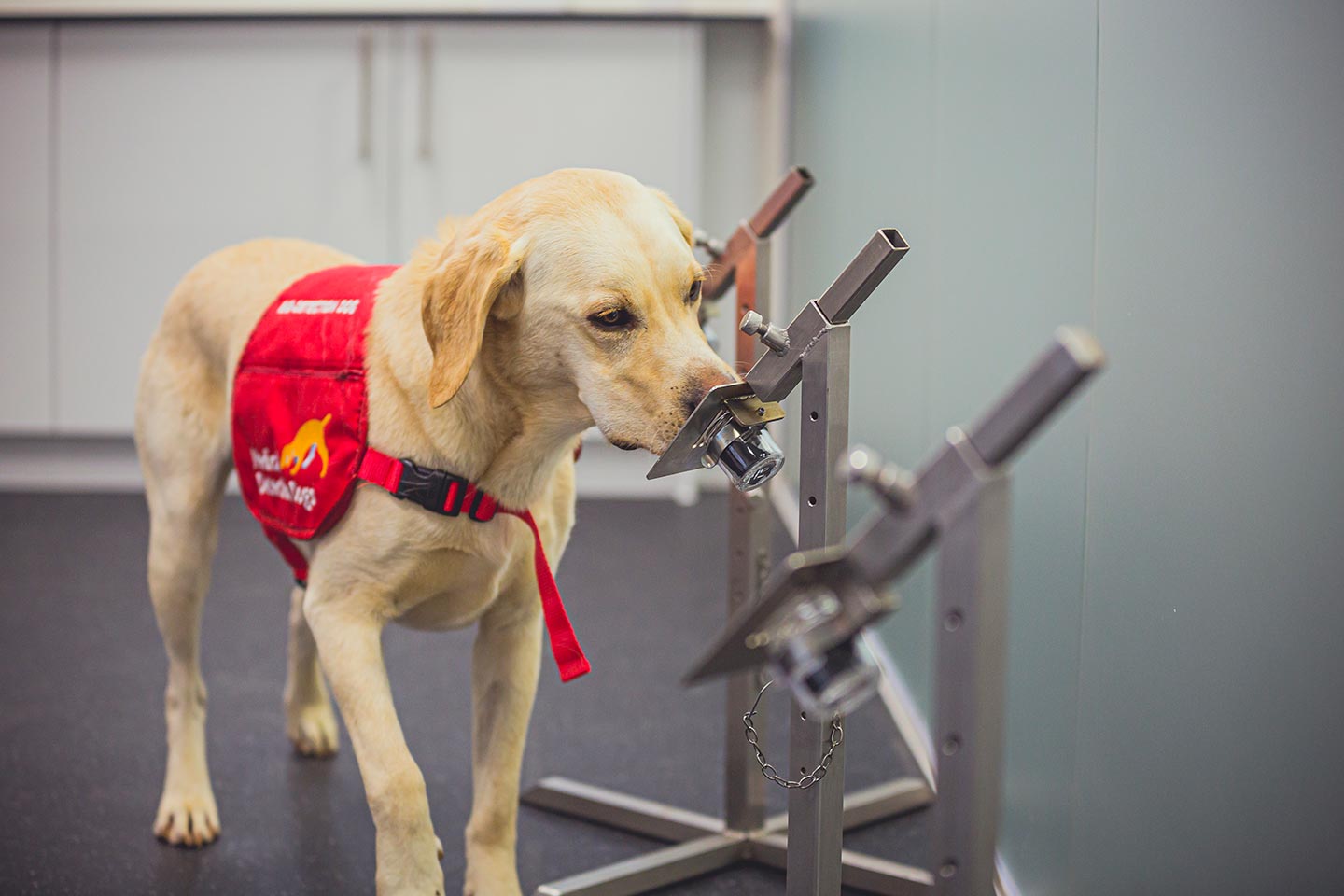 Nose and throat swabs have been the go-to method for diagnosing COVID-19 since the start of the pandemic. But the latest diagnostic weapon requires no laboratory equipment: just a leash and a pocket of doggie treats.

Dogs have up to 300 million olfactory receptors in their noses, compared to our five million, making them supremely sensitive to scent. Over the past two decades various studies have suggested that they can distinguish between healthy individuals and those with various types of cancer, Parkinson’s disease, and hospital acquired infections such as Methicillin-resistant Staphylococcus aureus (MRSA). One recent study also suggested that dogs could detect asymptomatic malaria infections in children with 73% reliability, by sniffing their used socks. Various countries are now investigating whether dogs could similarly be used to detect people who are infected with coronavirus, with some early clinical trial data suggesting that they can.

Although dogs are still not as accurate as PCR tests for COVID-19, they have the advantage of speed.

In the case of cancer, scientists have established that changes in certain cellular proteins during tumour growth can trigger chemical reactions in the membranes that surround cells, releasing gaseous compounds that can be detected on people’s breath or in their urine. However, for coronavirus, and other viral or bacterial infections, it is unclear whether the dogs are detecting the scent of the pathogens themselves, or changes they trigger in our bodies when we are infected.

It takes around eight to ten weeks to train a dog to detect coronavirus. The dogs are initially trained to detect a non-biological target scent, and to indicate when they have found it, using their own unique “tell sign”, e.g. sitting down or wagging their tail. They are rewarded with an edible treat or toy for correctly indicating a positive sample or correctly ignoring a negative one.

Once they’ve mastered these basic principles, the dogs are trained using clothes or face-coverings worn by people who had tested positive, and negative for COVID-19.

Gun dog breeds such as Labradors, Golden Retrievers and Spaniels make particularly good medical detection dogs. Not only do they enjoy the “game” element of searching out scents, but they also tend to be temperamentally well-suited to working with humans in public places.

Two recent studies have suggested that dogs can distinguish between clothes or sweat samples collected from infected and non-infected individuals with a high degree of accuracy. In one study, researchers at the London School of Hygiene and Tropical Medicine and Durham University in the UK, together with the British charity Medical Detection Dogs, found that dogs could rapidly, and non-invasively detect COVID-19 with up to 94.3% sensitivity – meaning that they would correctly identify 94 out of every 100 infected people. This compares with a sensitivity of 97.2% for PCR tests, and 58-77% for rapid lateral flow tests. The dogs were also 92% correct in identifying negative samples, the research suggested. The study involved 3,921 adults, with odour samples collected from 1,097 infected and 2,031 uninfected individuals.

In the second study, researchers led by Dominique Grandjean at France’s National Veterinary School in Paris found that trained dogs were able to detect the presence of the virus with 97% accuracy, and were 91% correct in identifying negative samples. 335 people and nine trained dogs were involved in the study, with 109 people found to be COVID-19 positive via a subsequent PCR test.

However, neither study has yet been peer-reviewed, and further research is needed to confirm that dogs can achieve the same degree of accuracy when presented with infected humans in real-world settings such as airports, rather than scraps of fabric in laboratory conditions.

Although dogs are still not as accurate as PCR tests for COVID-19, they have the advantage of speed: Whereas PCR tests require samples (usually swabs of material collected from the nose and/or throat) to be sent away for laboratory processing, and typically take 24 hours or more to return an answer, dogs can detect coronavirus infections in under a second. Even so, they are unlikely to ever fully-replace PCR tests.

Training dogs takes time, and there would never be enough dogs – or handlers – to screen entire populations. Where they could be more useful is at public transport hubs, such as airports, where they could rapidly screen disembarking passengers – particularly those arriving from high-risk countries – much as trained drugs and explosives sniffer dogs already do. Those identified may still require a confirmatory PCR test, and to quarantine while awaiting the results, but this would significantly reduce the numbers having to do so.

Dogs could also be stationed at the entrances of large public events, and entry refused to anyone identified as COVID-19-positive.