Measles is one of the world’s most contagious viruses. It can impair sight, hearing and cause brain inflammation and pneumonia. But even though it can be prevented by a vaccine, outbreaks in unvaccinated children continue to erupt even in the world’s wealthiest countries – in 2019, the USA saw its largest measles outbreak for a quarter of a century. 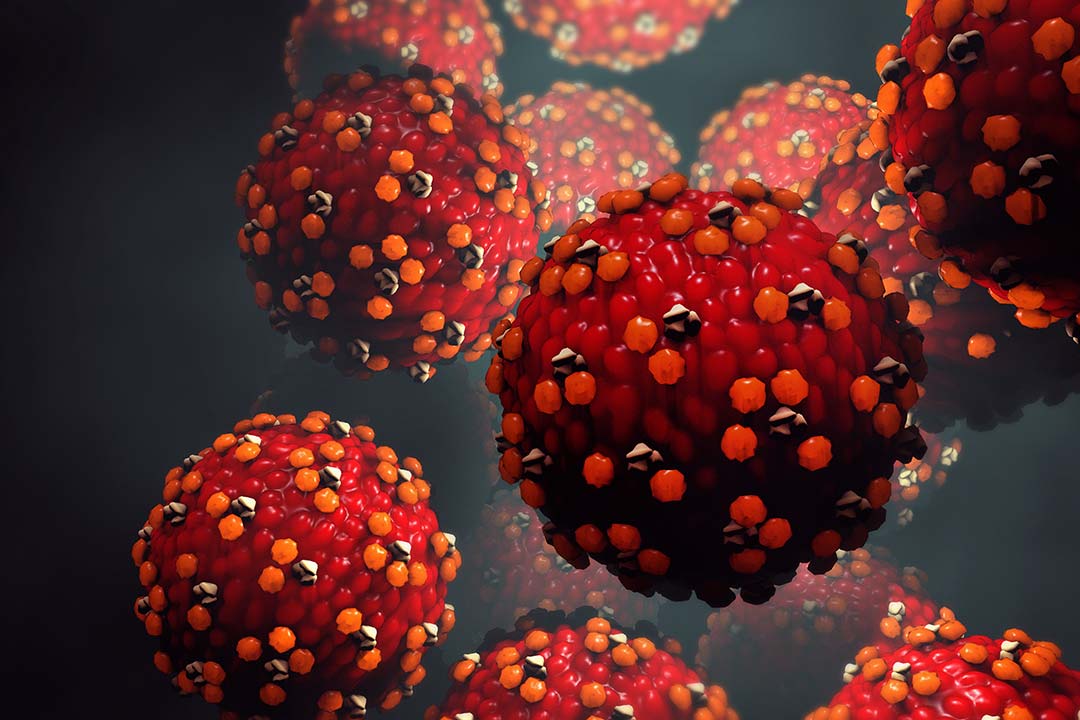 In 165 AD, Roman rulers dispatched amulets around the empire to be hung over doorways. They read: “Phoebus, the god unshorn, keepeth off plague’s nebulous onset” and were intended as charms against the plague that was killing thousands of Romans every day. Victims of the plague had fever, chills, and rashes. This was the Antonine plague: the first known pandemic.

Measles is one of the world’s most contagious viruses and one person with measles can infect as many as 18 others.

Scientists are still not sure whether this was caused by measles or smallpox; the two diseases were confused for each other frequently. That is, until the ninth century when Persian physician Muhammad Ibn Zakariyya al-Razi described the differences between the smallpox and measles based on clinical examination.

The first sign of measles is usually a high fever, which begins about 10 to 12 days after infection. This is followed by a cough, red and watery eyes, and small white spots inside the cheeks, which can develop in the initial stage. After a few days a distinctive rash erupts, usually on the face and upper neck.

Measles can cause visual or hearing impairment (it is one of the leading causes of blindness in lower income countries), encephalitis (an infection that causes brain swelling), severe diarrhoea, or severe respiratory infections such as pneumonia. Severe measles is more likely among poorly nourished young children. There is also evidence that measles can impact our immune system, reducing our ability to respond to diseases we could previously fight off.

In lower-income countries infection with measles can be deadly, but even when children survive they may be so visually or hearing impaired that they have to drop out of education, which then has a knock-on effect on their health and wellbeing for life. Vaccinating against measles can also have a significant impact on the economy, meaning families avoid spending their weekly budgets on treating the disease. For many low-income households this can be so catastrophic as to send them into poverty.

Measles is one of the world’s most contagious viruses and one person with measles can infect as many as 18 others. In the 18th century, the Scottish physician Francis Home showed that the disease is caused by an infectious agent, and he also attempted to produce a measles vaccine by inoculating volunteers cutaneously.

In 1954, John Enders and Thomas Peebles collected blood samples from students sick with measles during an outbreak in Boston, Massachusetts, and isolated the virus to develop a vaccine. In 1968, an improved vaccine, developed by Maurice Hilleman and colleagues, began to be distributed. The vaccine is given in two doses, typically as part of the MMR (measles, mumps and rubella) vaccine.

This is a disease that is almost completely preventable by vaccination and it is cheap – it costs about US$1 to immunise a child. Yet during 2020, more than 22 million infants missed their first dose of measles vaccine: more than three million more than in 2019 and, according to the World Health Organization, the largest increase in two decades. Since measles is so contagious, more than 95% of children need to be vaccinated to ensure herd immunity. Even the smallest dips in vaccination coverage can rapidly increase the risk of outbreaks. That is why reaching missed communities and providing equitable access is key.

Alongside this, measles surveillance has also deteriorated during the pandemic, with the lowest number of specimens sent for laboratory testing in over a decade. Increasingly, this is jeopardising countries’ ability to stop outbreaks of this highly infectious disease.