In about 13 months, Pakistan has turned the vaccination tide, fuelled by the availability of adequate COVID-19 vaccine doses. 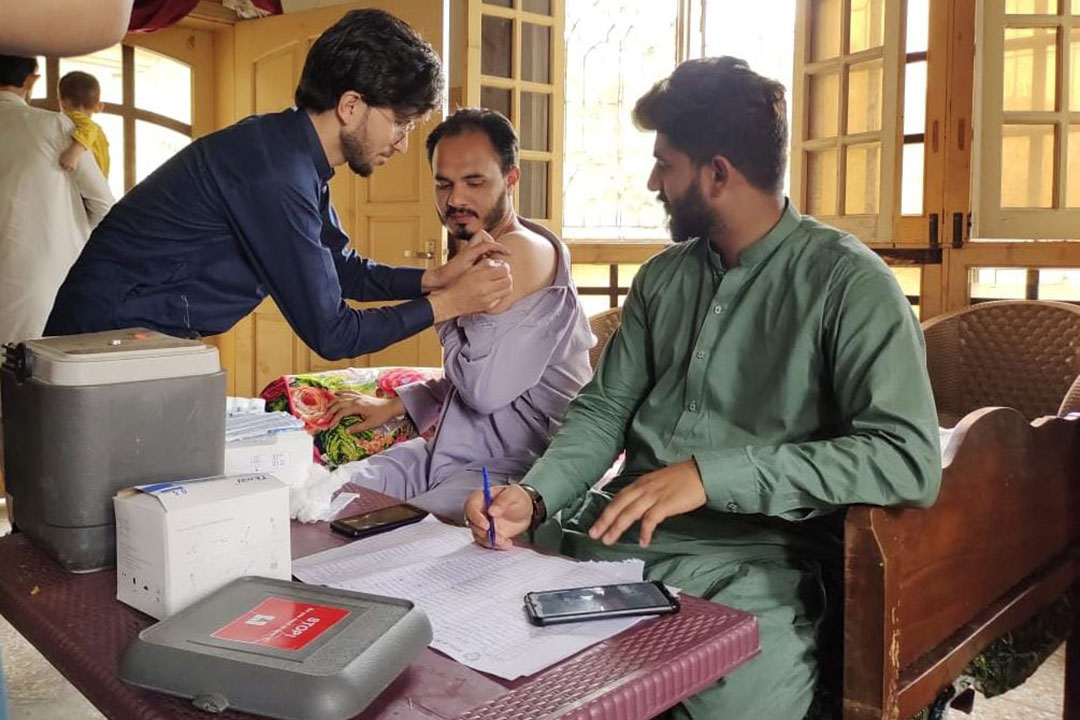 Malik Khurram Shahzad, a resident of Mansehra, a city in the northern region of Pakistan, is finally fully vaccinated against COVID-19 and has the vaccination card to prove it.

Shahzad is happy to be counted amongst the vaccinated people of the country, but initially he was sceptical about getting vaccinated through the first three waves of COVID-19 in Pakistan. He only received the jabs after the emergence of the Omicron variant in the country.

“Vaccine supply through COVAX was very critical in vaccinating the high-risk population. COVAX not only helped Pakistan in providing the vaccine along with its complete kit including syringes, but also supported the equipping of the cold chain system, managing of general logistics and training of vaccinators.”

He says, “There was an absence of proper knowledge about the COVID-19 vaccine as well as a lot of misconceptions. Also, with vaccinated people getting re-infected, I felt that these raised questions around the efficacy of vaccines.”

What changed Shahzad’s mind was the severe illness and subsequent death of his uncle who refused to get vaccinated. His uncle, who he was extremely close to, caught the virus at a wedding ceremony and died from COVID-19 in December 2022.

“I was not allowed to attend his funeral ceremony and he was buried in an unceremonious way,” says Shahzad.

Shahzad is, in a way, reflective of how Pakistan, with a population of more than 220 million, has been able to change hesitancy into public trust on vaccines.

According to vaccinator Shahzeb Khan, in the beginning there was both a lack of awareness and facilities, which slowed the vaccination pace in the country. He says that, however, with the increase in awareness campaigns, the rising number of deaths and the increased availability of vaccines, larger numbers of people started going to vaccination centres to get the jab.

“People started understanding that vaccines are saving lives and not harming them,” Shahzeb adds.

Pakistan started its COVID-19 vaccination campaign in early February 2021 and, at the time of writing, has fully or partially-vaccinated 87% of the eligible population. According to data from the Ministry of National Health Services Regulations and Coordination (NHSR&C), the total eligible population is just over 143 million and federal and provincial health authorities have, partially or fully, vaccinated more than 125 million in 13 months.

According to Dr Rana Muhammad Safdar, the Director General at the Ministry of National Health Services, Pakistan received 267.9 million doses of COVID-19 vaccines. Eighty-three million of these came from the COVAX initiative.

“Vaccine supply through COVAX was very critical in vaccinating the high-risk population. COVAX not only helped Pakistan in providing the vaccine along with its complete kit including syringes, but also supported the equipping of the cold chain system, managing of general logistics and training of vaccinators,” says Dr Safdar.

Health analysts believe that, along with ensuring vaccine availability in the country, the better communication strategy employed by the government helped to change negative perceptions people held about the vaccine.

Dr Zafar Mirza, former Director of Health Systems at the World Health Organization’s (WHO) Regional Office for Eastern Mediterranean and Pakistan’s former Special Advisor to the Prime Minister for Health says that Pakistan adopted an effective communication strategy to deal with misconceptions and disinformation about COVID-19 vaccines.

“For example, the 150 million mobile phone users in the country heard pro-vaccination messages instead of traditional ring tones when dialling,” he says.

In addition, he says that the work on risk communication and door-to-door vaccination services using Expanded Immunisation Program (EPI) staff in far-flung areas of the country made a significant contribution in convincing people to get vaccinated.

“Despite being a non-vaccine producing country, Pakistan has done tremendously in such a significant portion of the population,” he concludes.