Stories from the community
Rotavirus 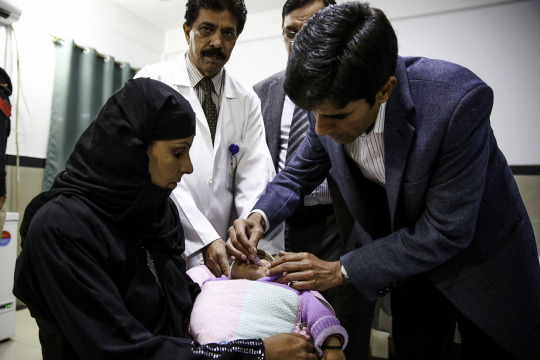 Four-month-old Fizza will have a healthier start to life than most young children in Pakistan. Today she became the first baby in the country to be vaccinated with the rotavirus vaccine, which protects against the most common and lethal form of diarrhoea.

This marked the beginning of a remarkable step by Pakistan’s Punjab province to improve the health of its children. Punjab reports more than 20,000 deaths caused by diarrhoea every year, of which over 40% are due to rotavirus.

Not only is Punjab the first Pakistani province to launch the vaccine, but it has also committed to paying for the vaccine doses used in the first phase of the introduction. “You are truly showing the way for the rest of the country,” said Angela Kearney, country representative of UNICEF in Pakistan.

The rotavirus vaccine launch is far from the only example of Punjab’s commitment to vaccination. In 2014, it launched a smartphone technology known as “E-vacc” – an innovative app used to track vaccinators’ activities, map rural communities and relay the information back into the vaccination programme.

The initiative has greatly benefited from the support of Punjab’s Chief Minister Shehbaz Sharif, whose personal involvement has extended as far as recording voice messages sent to parents in the province, reminding them to have their children immunised.

The E-vacc approach has yielded impressive results. In the first 12 months of the pilot programme, coverage rates jumped significantly across a range of vaccines.

“2016 has been a year of successes for EPI in Punjab,” said Khawaja Salman Rafique, Minister for Specialised Healthcare and Medical Education. “With innovation and enhanced supervision and monitoring, Punjab has been able to increase its routine immunisation coverage from 64% to over 86% within one year.”

The rotavirus vaccine has the potential to save thousands of lives every year in Pakistan, which accounts for approximately 7% of the 215,000 children who die of rotavirus diarrhoea worldwide.

“The introduction of rotavirus vaccine is a historical moment for us in Punjab. We are grateful to our international development partners, Gavi, the Vaccine Alliance, UNICEF and WHO for providing vaccines, as well as technical and material support for introducing the new vaccine,” said Khawaja Imran Nazir, Minister for Primary and Secondary Healthcare.

Along with basic interventions such as oral rehydration salts and zinc treatment, rotavirus vaccines are a vital step towards helping children to grow up healthy. And, thanks to the leadership and innovation of Punjab, it is a step that will lead to lasting impact in the whole country.