Volunteers, including King Dakolo of the Epetiama kingdom, are sensitising and convincing people to accept the COVID-19 vaccine in Bayelsa State, Southern Nigeria. 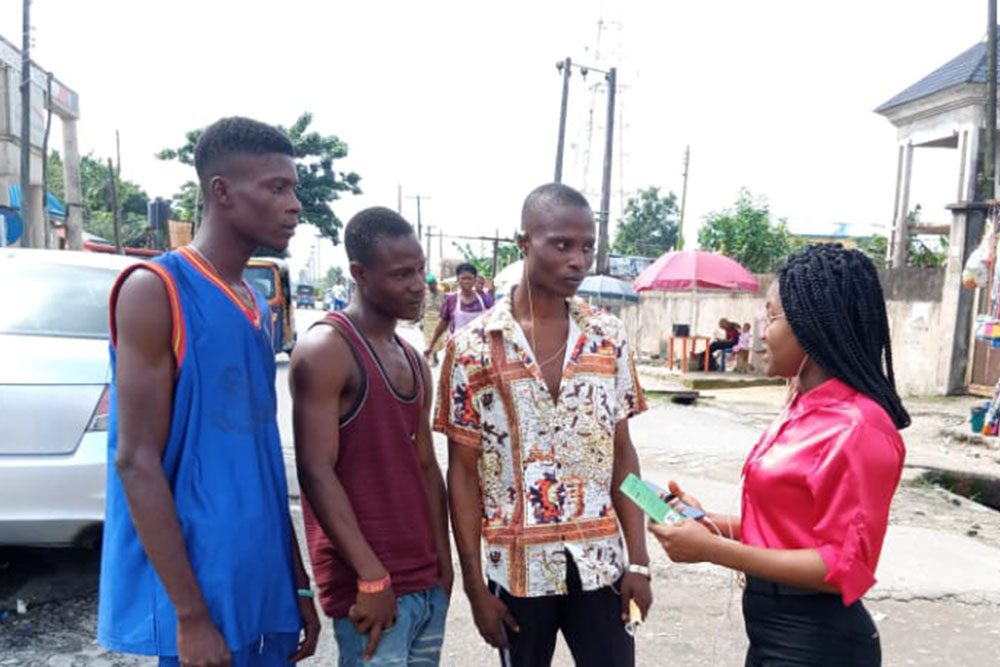 Dorathy James was among the first people to be vaccinated in March 2021 when the Nigerian government distributed about 45,000 doses of the AstraZeneca COVID-19 vaccine to her state of residence - Bayelsa, in southern Nigeria.

The 27-year-old could not hide her excitement, which only grew after having her second jab.

"My fear of the dreaded virus was conquered the day I took my first shot of the vaccine,” she says. “Before then, I had resigned myself to fate. I was highly excited after the vaccination. The worry of getting infected or losing any loved ones no longer ran wild in my mind. For me, the COVID-19 vaccine is the safest way to build protection.”

The advocacy work of James and her fellow volunteers has had an impact on the narrative around vaccines, with an increasing number of people getting vaccinated in the state.

"Also, the jab was not as painful as I thought. And, afterwards, I had a slight headache for a short period and was able to go about my normal business not long after the jab," she adds.

Passionate about the health of others, James also volunteered to build awareness around and confidence in the vaccine.

James explains how they went about it: "To begin with, many in the villages don't understand English so we found interpreters to translate our message to the villagers in their dialects. In addition, most rural dwellers don't have access to electricity and the internet. To address these and other challenges, we made use of town criers to pass the message to them. In some instances, community leaders, who were pleased with what we were doing, hired vehicles, mounted loud speakers on them and sent from place to place, sharing the benefits of the vaccine and encouraging residents to get jabbed.”

The advocacy work of James and her fellow volunteers has had an impact on the narrative around vaccines, with an increasing number of people getting vaccinated in the state.

James also linked up with the traditional ruler of the Epetiama Kingdom in Bayelsa, King Bubaraye Dakolo. The monarch, buoyed by the passion of the volunteers, stepped up sensitisation and awareness campaigns in his kingdom.

"The arrival of the vaccine brought a huge relief to our kingdom," says King Dakolo. "I mobilised my people to carry out awareness campaigns in the various communities in the kingdom to ensure that there is no apathy in taking the vaccine. My council chiefs and I led by example in being vaccinated early. When the people saw that, they were fully convinced that the vaccine is not harmful."

King Dakolo adds, "We made it clear to our people through town hall meetings that the vaccine is safe and is designed to save humanity. We equally reminded them how some persons who refused to be vaccinated for poliomyelitis in the past are suffering the consequences of their actions today. Many residents are enthusiastic to take the vaccine in our communities now."

Oyifiemi Emmanuel, aged 62, was initially hesitant to be vaccinated, but he was convinced by James and her fellow volunteers.

"I was misled by misinformation and had made up my mind that I would not be vaccinated,” he says. “The volunteers helped change my perception. I have already had the two jabs. I have also joined the volunteers to encourage people to embrace the vaccine for their protection and to be able to eventually lead a normal life.”

Another person who was swayed by the testimonies of the volunteers is 45-year-old community leader, Philip Pius.

He says, boldly, "After I was shown that there was no cause for alarm, I embraced the vaccination. I have had two jabs, the first in March and the second in late June. I must confess that taking the vaccine has boosted my confidence. I have also been able to reconnect with friends and loved ones.”

“We are not resting on our laurels”: COVID-19 survivors encourage vaccination in Nigeria