Stories from the community
Cross-postsPolioZero-dose children

Reaching the remotest areas with the polio vaccine.

It's a sunny Thursday morning and Mamie Munthali, 46, is on the way to administer the polio vaccine in Kamanda Village, 26km trip from Enukweni Health Centre in Mzimba, Northern Malawi.

During the visit, the senior Health Surveillance Assistant (HSA) and her colleague Van Ng'ambi take off their shoes to cross Liwazi River where half of a 30m bridge has collapsed. Just then, a dozen of women with babies saddling on their backs pop into sight, walking perilously in running water paved by a lush strip of reeds.

When the group heard volunteers announcing the dates of an emergency polio vaccination campaign in their community, they quickly teamed up and left early in the morning for "the usual place" in Katokole Village across the river, where their children receive routine immunisation once a month.

The mothers had walked over 15km to ensure their children were vaccinated against polio, but they needed not to walk any longer.

Mamie and Van  vaccinated the children by the riverbank to cut short the long walks caused by the bridge which crumbled in 2008. This has rendered settlements on the slopes of Kamanda Hills hard to reach.

"I have been an HSA for 26 years and nothing makes me happier than helping to end preventable diseases . Bringing vaccines close to those who need them increases uptake," Mamie explains as she works.

For the 46-year-old mother of two, the community outreach evokes memories of 1992 when Malawi last recorded a case of wild polio type 1. She recalls teams of community health workers vaccinating children in every homestead under a national programme to kick out polio. This inspired her to become an HSA.

Now she finds herself back on the road following the confirmation of the first wild polio case in Malawi in 30 years. As did her predecessors in the early 1990s, she goes door to door, vaccinating children to prevent the spread of polio. The disease which is transmitted when one takes food contaminated by faeces from an infected person.

"Since my motorcycle was stolen, I walk long distances to vaccinate children at risk of poliovirus. I know we can defeat the virus if we vaccinate every child and we have done it before. We have to do it to save a generation and assure the nation that vaccines work," says the senior HSA in charge of six teams deployed by Enukweni Health Centre to vaccinate 2,360 children in four days.

"We have been through thick and thin, over hills and valleys, in villages and across rivers because every child deserves a healthy start in life," she says.

Moyo finds it exciting that when the women from Kamanda heard of the polio vaccination campaign, they promptly came though she was geared to go to them.

She is one of 13 500 health workers trained with support from UNICEF and the World Health Organisation to vaccinate 2.9 million children from March to June 2022. UNICEF installed 170 new vaccine refrigerators, repaired faulty ones and distributed  carriers to health facilities in all the districts. It also procured and distributed 6.8 polio vaccine doses to all 865 health facilities nationwide.

This marks the first phase of a regional campaign to vaccinate 9.4 million children in Malawi, Zambia, Mozambique and Tanzania. Three more rounds will follow, to protect children at risk of polio infection following the confirmation of Africa's first polio case since 2016.

UNICEF Malawi Representative Rudolf Schwenk says that although it is sad that Malawi has detected the first case in three decades, the commitment by the Government of Malawi and its partners in preparation to vaccinate all children assures him that the country can keep its polio-free status.

During the launch of the polio vaccination campaign at Chileka School in Lilongwe on 20 March 2022, he said: "We know this is doable because we have done it in the past. We also know that the only way to do this is by vaccinating every child in every household. Even one child with polio is one too many, so we cannot stop until we end this disease for good.

"No child should suffer for life from a preventable disease. Our joint responsibility that something as inexpensive, safe, effective and easy to deliver as a vaccine–which has already saved hundreds of thousands of children worldwide–reaches those at greatest risk in Malawi."

Apart from procuring and distributing polio vaccine doses to all 865 health facilities nationwide, UNICEF trained faith-based and traditional leaders to mobilise their communities for increased uptake of the oral shots.

Minister of Health Khumbize Kandodo Chiponda is optimistic that Malawi, with the support from partners such as UNICEF, will sustain a wide coverage of vital vaccines above 80 per cent to contain vaccine-preventable diseases, including wild polio.

"The high-level political support and leadership of the government have inspired the nation, the global community as well as in-country partners to act in unison and halt the spread of polio. I'm very optimistic about this national campaign because of the level of commitment and organisation I have seen," she said.

The community inroads excited the rural majority who endure long walks to get their children vaccinated as health facilities remain few and far apart.

"Bringing vaccines close to where we live will help safeguard our children from polio for life. This is pleasing and we thank the community health workers for their dedication," says Resita.

This article was first published by UNICEF Malawi on 6 April 2022. 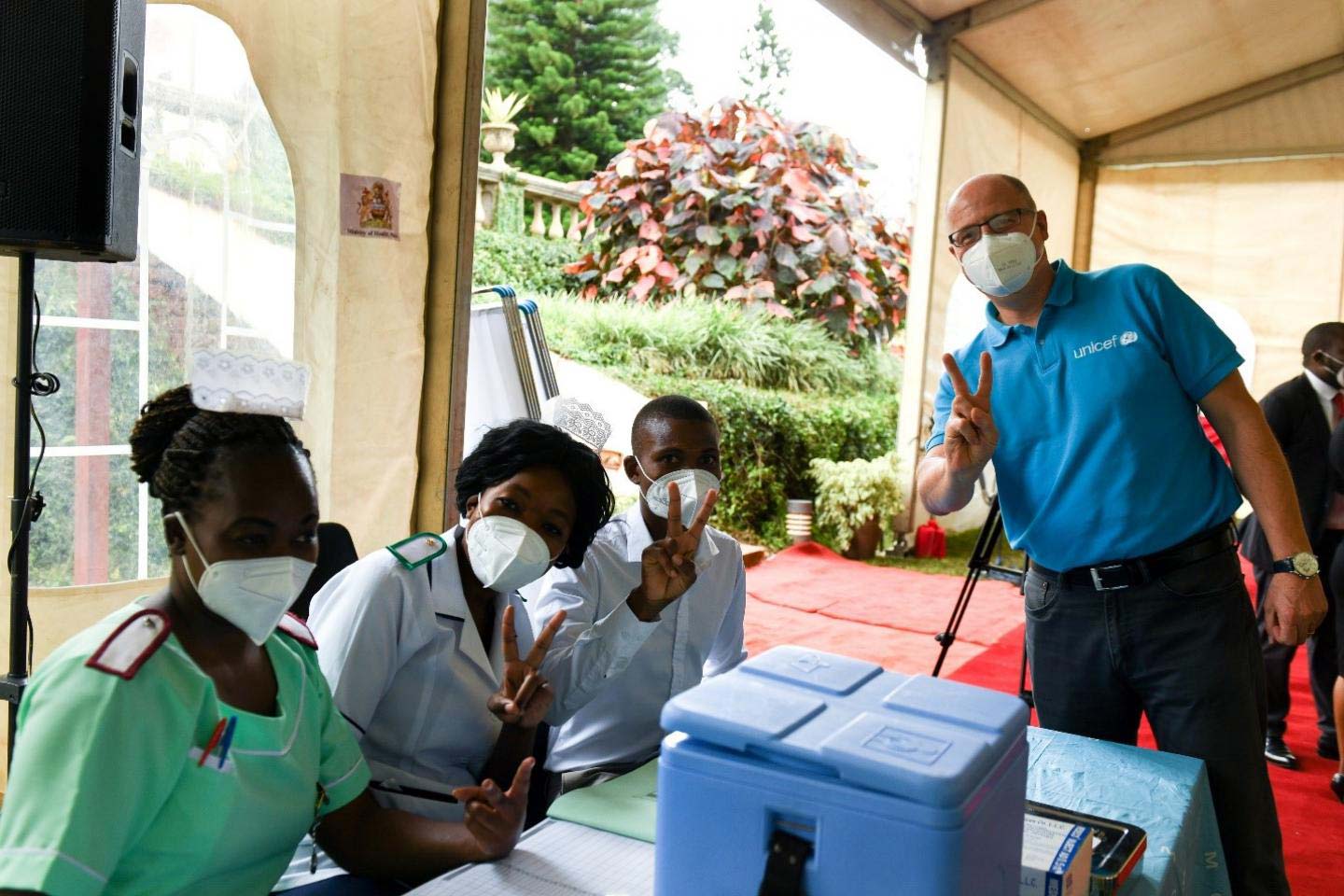 The path to normalcy- COVID-19 vaccine roll out in Malawi

A day in the life of a vaccinator in Mali