Tales from the past
PolioEducational 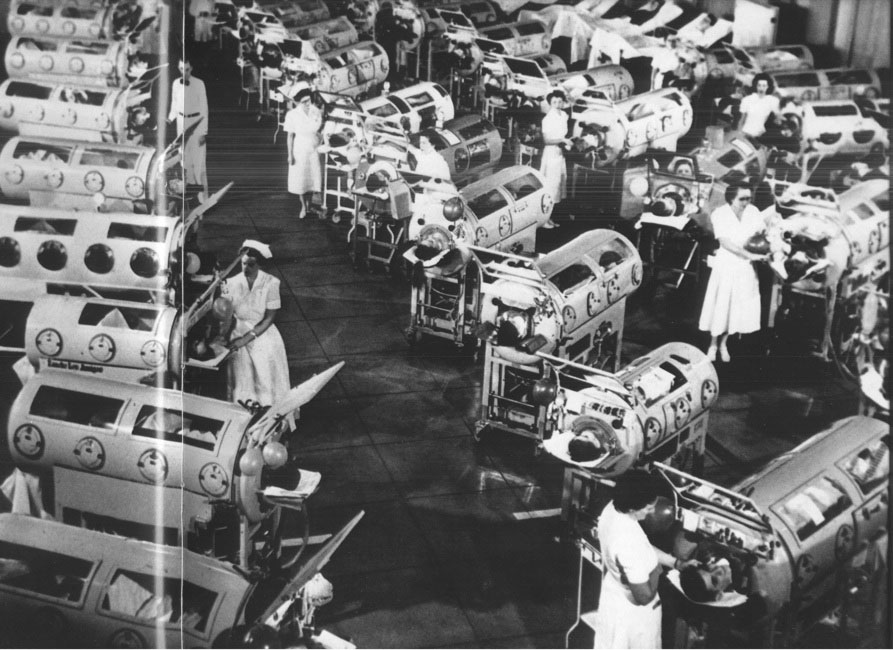 The most important character in “No Pain”, a 1955 episode of the weekly television show Alfred Hitchcock Presents, is a wheezing, electrified, coffin-sized machine: an iron lung, a negative-pressure respirator. Inside it lies a polio-paralysed millionaire, who is quietly discussing his own murder with his would-be killer: his unfaithful, able-bodied wife. The machine falls silent; the clock starts ticking. She has disengaged the seal on the breathing apparatus and drawn her husband’s unmoving body forward out of the tube on the sliding “cookie tray” inside. He is only capable of breathing unassisted for ten minutes. “Dave, let’s not kid ourselves. You’re more dead than alive,” she says to him. “You lie in there, day in and day out, like an airtight pound of coffee in a can”. “I want to hang onto what I can keep,” he replies. He watches his wife’s movements in a mirror mounted to the machine over his head. It’s cruel when she steps out of view, crueller that she so easily can.

The story is a claustrophobic horror-fantasy of the loss of control. The iron lung, at that point not yet 30 years into its tenancy in America’s cultural consciousness, is depicted as a torture chamber – not despite its medical necessity, but because of it. In the 1950s, epidemic polio acquired the status of national trauma in the United States: 15,000 cases of polio paralysis were recorded each year, and a survey of 1952 found that Americans were only more afraid of nuclear annihilation than of polio. The iron lung would come to symbolise that breathless, collective dread.

If that fear is difficult to recall now, it’s because 1955 was also the year that Jonas Salk’s polio vaccine turned the tide of infection. The impact of mass vaccination was monumental: at the epidemic’s peak in 1952, the US recorded nearly 58,000 polio cases; by 1957, that number plummeted to fewer than 5,500, and through the 1960s, polio paralysed fewer than 10 Americans each year. The iron lung became abruptly obsolescent, an artefact in a museum basement somewhere. But before that, it saved thousands of lives.

Although the poliovirus is ancient, large outbreaks of poliomyelitis were unheard of until the end of the 19th century. Major waves of infection began to break over parts of the US most summers after 1916, usually sickening children. There was – and still is – no treatment beyond supportive care. In most cases, the virus caused fleeting symptoms, but about one in 200 patients suffered irreversible paralysis. If the breathing muscles were affected, patients faced death by suffocation – there was little doctors could do to help.

Then, in the late 1920s, a Harvard engineer and industrial hygienist called Philip Drinker visited the Boston’s Children’s Hospital to consult on a climate-control question. He passed through a ward which housed children dying of polio-induced respiratory failure. “He could not forget the small blue faces, the terrible gasping for air,” wrote his sister Catherine Drinker Bowen later. It occurred to Drinker that he might have something to offer them: alongside a physician colleague called Louis Agassiz Shaw, he had been trialling a machine for the artificial resuscitation of gas poisoning and electric shock victims.

In 1928, the pair tested a prototype iron lung on an eight-year-old polio patient. The little girl was unconscious from lack of oxygen when they pushed her body in through the open end of what looked like an angular submarine. Her head rested on a cushion outside the mouth of the tube, at atmospheric pressure. A flexible collar created a seal at her throat, and a mechanical, electrically powered bellows forced the air pressure inside the sealed tube to rise, then fall, rhythmically. As it pumped, her chest expanded and contracted; her lungs inflated and emptied. The girl woke up. When she died 122 hours later, the autopsy revealed the cause was a secondary pneumonia unrelated to the machine. “During the time that the child was in the respirator, she was able to talk, sleep, and take nourishment while the pumps were running,” Drinker and Shaw wrote in their 1929 report.

The machine was cumbersome and expensive – after a 1931 redesign by John Haven Emerson, slightly less cumbersome, a bit less expensive – but polio was spiking, and the need was grave. As early as 1939, 1,000 iron lungs were in active use in the US. Some iron lung patients didn’t make it. Many needed the assistance of the lung only until their bodies had fought off the virus and built back the strength. Others stayed longer. Babies were born in iron lungs, law degrees were earned, and, yes, murders were committed.

No question that life in an iron lung was hard. Simple inconveniences were magnified to bitter frustration – “If you laughed and made your eyes have tears they would trickle down to your ears and that was annoying because there was nothing you could do about it”, remembered one iron lung inmate – or even existential desperation. In 2008, 61-year-old Dianne Odell, of the last few surviving iron lung users in the United States, died in Tennessee as a result of a temporary power outage.

Mona Randolph contracted polio in 1956, a year after Salk’s vaccine rolled out. She was 20, older than the main demographic of concern. By day three, she was in an iron lung, and there, recovered well: like many luckier survivors, she found that her enduring concern was limited mobility in one arm. But in the 1980s, her condition took a turn for the worse. Post-polio syndrome degraded her breathing, and, for the next several decades, she would return to the old iron lung, now years out of production, at night when her diaphragm was exhausted from the great effort of respiration. A year before she died in 2019, she told the Kansas City Star, “It’s a relief to get in, and it’s a relief to get out.”