Tales from the past
MumpsVaccine development

Mumps: The story of the second fastest vaccine ever developed

For Maurice Hilleman, the invention of the mumps vaccine combined good science and good parenting. Until COVID-19 vaccines, it would be the fastest vaccine development in history. 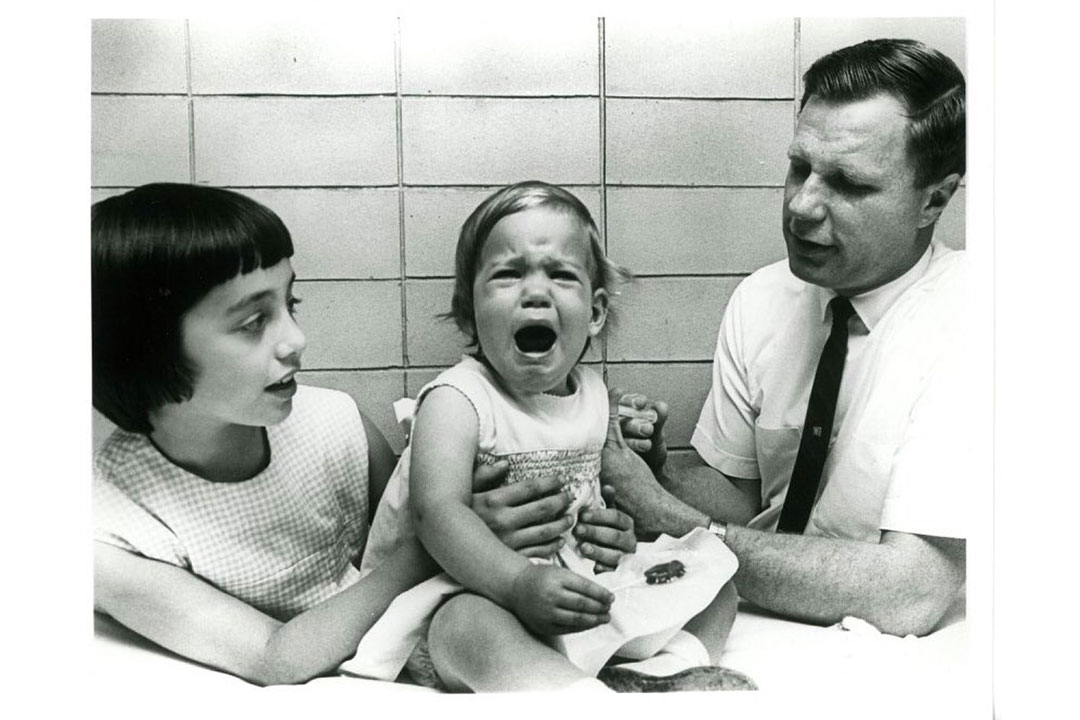 A 1966 photograph that accompanied Merck's press release about the successful vaccine depicted Jeryl Lynn comforting the crying Kirsten as the younger girl received her vaccination with the Jeryl Lynn Strain from Dr. Robert Weibel. Credit: The National Museum of American History

Five-year-old Jeryl Lynn of suburban Philadelphia woke up sick one night in 1963 and padded out of her bedroom to wake her father. “Oh my god – she had a throat like this,” her dad, Maurice Hilleman, said1 decades later, gesturing a thickening at the bend of the jaw. “I said, holy shit: you got mumps.”

Now in his eighties, white-haired, jowly as a bloodhound, chuckling behind sinking spectacles, he remembered: “I said – get back into bed. I go up to the lab, it was about one in the morning, got specimen-collecting things, brought them back, took throat swabs, took ’em back to the lab and froze them.”

For speed, the development of the mumps vaccine would be his record – a record that wouldn’t be broken by anyone until the world focused its scientific and financial resources on creating a vaccine against COVID-19.

An uncommon parenting response, but probably no great shock to Jeryl, who would grow up thinking of interferons, poly (I:C) and the internal politics of the Bureau of Biologics – an early incarnation of the FDA – as standard dinner-table conversation.

At work, Hilleman ran the pharma company Merck’s vaccine and virus research division, but his identity as a scientist followed him home. Trips with his daughters to the grave of his first wife, Thelma, who had died of breast cancer just months before Jeryl Lynn contracted mumps, became expeditions for capturing insects in formaldehyde, Jeryl’s younger sister Kirsten would recall. “He wanted everyone to learn science and love science,” Jeryl explained.

Born in rural Montana in 1919 amid the deadliest pandemic flu on record, Hilleman was a farm boy, an unlikely candidate for a life behind the microscope. But he found Darwin, who seemed to open the door to a reasoned, evidence-based alternative to his family’s Lutheran cosmology, and later won a scholarship to Montana State to study chemistry and microbiology.

He was talented and hard working – the frontier farming life was a good training ground, he said, as “you really became a workaholic – you did to survive” – and he graduated top of his year.  A ground-breaking PhD on chlamydia at the University of Chicago followed, after which academia threw open its doors to him – but Hilleman was an impatiently practical person who wanted to make things, so he went into industry and started developing vaccines.

When little Jeryl woke him to say her throat was sore, Hilleman was 43 years old and had already racked up a solid obituary’s worth of scientific achievements. He had developed a vaccine for Japanese B encephalitis, discovered that flu viruses “showed gradual and progressive minor antigenic changes punctuated infrequently by major changes,” which would be the basis for influenza vaccine strategies in future, isolated adenoviruses and produced a flu vaccine to squash a brewing pandemic.

And he had no plans to ease off. “My vision was that I wanted to conquer the pediatric diseases of children,” Hilleman said. Known as gruff, no-nonsense and amusingly enough, incorrigibly profane among his colleagues, Hilleman loved kids and was “very sweet as a daddy” according to his daughter, Kirsten. Roy Vagelos, who became Merck’s head of laboratories in 1975, said of Hilleman, “Of all the senior scientists I met there, he was the most focused on wiping out human disease.” His hit-list, according to Vagelos, included “basically every disease known to man”. By the time Hilleman died in 2005, he would be credited with the creation of a staggering 40 vaccines, including nine essential childhood jabs.

For speed, the development of the mumps vaccine would be his record – a record that wouldn’t be broken by anyone until the world focused its scientific and financial resources on creating a vaccine against COVID-19.

Just three years after his 15-mile, middle-of-the-night2 dash back to Merck to deposit Jeryl’s virus in the freezer, one-year-old Kirsten Hilleman would be inoculated with the candidate vaccine her father had made. In 1967, the jab was rolling out commercially in a blue-and-white box that read: “Mumpsvax Jeryl Lynn Strain”. “And he thought that was a nice thing,” Jeryl would later say of the product’s name, laughing.

Usually mild, mumps was common and capable of causing encephalitis and deafness in a minority of cases. In post-pubescent males, mumps frequently caused orchitis, a painful inflammation of the testes, which could make a man sterile. In pregnant people, mumps could result in foetal death or injury. But a natural infection also conferred lasting immunity – a promising sign for the development of an effective living vaccine.

A live-attenuated vaccine is basically an altered virus, its potency dialled down to the point that it doesn’t make you sick, but not so far that it fails to prompt the immune system to make antibodies. But “dialling down” a pathogen in this way is not as mechanical as it sounds. The approach Hilleman used was to co-opt natural processes of adaptive evolution, influencing the pathogen’s development by changing the environment it lived and replicated in. Some were easier than others.

“We isolated the virus and went into attenuation,” recalled Hilleman. “Boy, this one just went like that.” He passed the virus isolated from Jeryl’s throat-swab sample3, into a fertilised hen’s egg. Once it grew in the egg, he passed it into another egg, and another. Then, he took a chick embryo that had been incubating for 12 days, cut off its head with a pair of scissors, and minced the body. He treated the chick-slurry with a powerful enzyme that broke it down into individual chick cells, which reproduced to cover the base of a lab flask. Into that chick-cell flask, he inoculated the virus. With each passage – from egg to egg, from egg to chick cells – the virus was adapting, specialising: changing in ways that made it better at attacking chicken cells, and worse at attacking human cells.

At the point in the attenuation process that the virus appeared to be weak enough – and strong enough – to function as a vaccine, Hilleman’s medical doctor colleagues began the process of trialling it in human children. In what bluff, bullish Hilleman himself would later describe as “a big ethical issue”, the first people to receive the candidate immunisation were mentally handicapped children in state institutions. It was a common pathway for human medical science at the time, and one that rightly registers as abhorrent today. Speaking to his biographer, Hilleman offered the practical upshot: “My vaccine gave all these children the chance to avoid the harm of that disease.”

The trial broadened to thousands of volunteer families – including Hilleman’s own – who signed their consent on cursory 3x5-inch cards. The results came quick, and were clear: in 95% of vaccinees, detectable antibodies developed. There were no significant side reactions attributable to the jab. By the mid 2000s, more than one 150 million doses of the Jeryl Lynn strain vaccine had been distributed in the US, protecting thousands from deafness and meningitis.

Jeryl Lynn, of course, was never vaccinated for mumps – her brush with the virus had left her with natural immunity. But in 1991, she brought her son Colin to receive a shot of the MMR (measles, mumps and rubella) vaccine, which his grandfather had made. “It really hit me in a very personal way then when my first child was vaccinated,” Jeryl Lynn later said. “Looking at him and realising, really, the enormity of not having to worry about him getting mumps, and a lot of other diseases as well. It meant a lot to me as a parent.”

1. This article is particularly indebted to interviews in the film “Hilleman: A Perilous Quest to Save the World’s Children,” which is available to stream on Vimeo.

2. As narrated in Vaccinated: One Man’s Quest to Defeat the World’s Deadliest Diseases by Dr Paul Offit, which has informed this article extensively