Wanted: A vaccine against the measles

How the measles virus was trapped and tamed in vaccinology’s wild West. 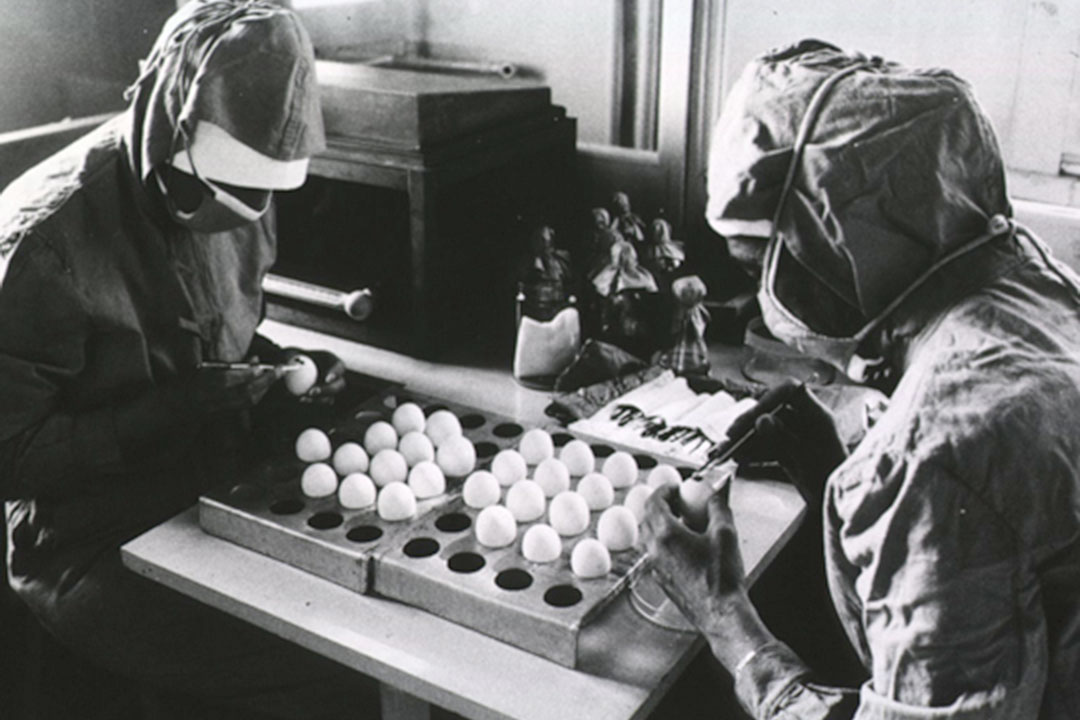 The preparation of measles vaccine using chicken eggs. WHO via Images from the History of Medicine (NLM)

In January 1954, when measles was making the rounds at the Fay School, a century-old boys’ boarding school in Southborough, Massachusetts, a young physician-scientist with a bag full of sterile throat swabs and syringes showed up at the infirmary. “Young man,” he said1 to each sick boy in turn, “you are standing on the frontiers of science.”

Efficacy is only half the battle. To be a vaccine, an antigen needs to be both extremely efficacious and extremely safe.

His name was Dr Thomas Peebles, and he had been dispatched to the school by Dr John F Enders, a Harvard microbiologist who would, later that year, be one of three scientists awarded the Nobel Prize in Physiology or Medicine for the discovery that the poliovirus could be grown in cultures of non-nervous tissues.

That achievement, making polio far easier to work with in lab settings, had paved the way for the development of the first polio vaccine, which was shortly to enter final-stage clinical trials. In less than two years, that vaccine would bring the deadly paralysing disease, the great pathogenic phobia of post-war America, to heel.

For Enders, measles was the next target. One of the most contagious viruses known to medicine, once measles set in it moved fast, spreading high fevers and rashes that were, at best, acutely uncomfortable. At worst, the virus caused encephalitis or pneumonia, which could kill in weeks. Sometimes, it killed on a delay: an unlucky few were struck, years after their first encounter with the virus, by an invariably deadly degenerative brain condition called subacute sclerosing panencephalitis, or SSPE.

The outbreak at Fay was far from rare. In the mid-1950s, measles was infecting some 500,000 Americans a year, killing about 500. Elsewhere in the world, major epidemics were expected every two or three years, and death rates were often far higher in poorer countries than they were in the US.

In parts of the savannah belt of West Africa, for instance, measles outbreaks were known to kill as many as 25% of infected children; in Chile, as many as half of all childhood infectious disease deaths were thought to be attributable to the virus. Cracking measles, it was clear to Enders and his team, could save millions upon millions of lives within a few short years.

So here was Peebles, not long out of med school, swab in hand, explaining to flushed, spotty teenager after flushed, spotty teenager that he and his team were hoping to grow the virus replicating in their bodies in vitro for the first time in history. “If we do, your name will go into our scientific report of the discovery,” he told them. “Now are you game?”

The boys were game. The virus less so. For weeks, it remained inert to Peebles’s encouragement.

Then, in early February, Peebles introduced a sample taken from a 13-year-old Fay pupil called David Edmonston to a lab flask containing cultured human kidney cells – an Enders-directed innovation that would prove revolutionary. Under the microscope, Peebles could see that the cells’ structure was beginning to change – a possible sign that Edmonston’s measles virus was growing in them.

Peebles called in Enders. To confirm that the virus was, indeed, causing the change they saw in the lab flask, they inoculated laboratory monkeys with the stuff. Soon, the monkeys broke out in tell-tale rashes, and spiked fevers. The team had snared the measles virus.

Next, they needed to tame it.

The principle of vaccination was, at root, the same as it had been since the 1790s, when Edward Jenner proved that infection with cowpox, the milder cousin of deadly smallpox, could generate protective immunity against its dangerous analogue. One hundred years later, Louis Pasteur had shown that in the absence of a handy naturally-occurring ‘vaccine’ virus, a pathogen could be attenuated, or weakened, just enough to function as its own vaccine – but not so much that it failed to excite an immune response.

But how? There was no roadmap, no failsafe formula for attenuation. “It’s guts and judgment. It’s just absolute trial and error,” Dr Paul Offit, author of  Vaccinated: One Man’s Quest to Defeat the World’s Deadliest Diseases and co-inventor of a rotavirus vaccine, told the podcast Radiolab in 2020.

It stood to reason that growing the Edmonston measles strain in a sequence of different cultures was likely to alter the virus. So the team began with what was close at hand: placentas, rescued from the medical bins of a nearby maternity hospital.

“Enders, in his customarily frugal but innovative fashion, suggested we strip the amniotic membrane from these discarded placentas and attempt to prepare cultures of human amnion cells,” recalled Dr Samuel L Katz, another member of the team, years later. After 24 passages through the human kidney cells, the measles replicated effectively in these amnion cell cultures. Enders “then suggested that if the virus grew readily in human amnion cells, perhaps it would also replicate in a nonhuman but similar environment,” writes Katz.

That meant, in practice, fertile chicken eggs. After six passes through the chicken egg cells, there followed 13 passages through chick embryo tissue, and then, at last, the first experimental inoculation of the resultant quasi-virus – or the maybe-vaccine – into living monkeys.

“In contrast [to the unaltered virus cultured in human kidney cells] the chick cell virus produced no rash, no detectable viremia [presence of virus in the blood] but nonetheless… virus-neutralizing antibodies,” Katz wrote.

By 1958, the team judged their vaccine ready to be tested in humans. In what must qualify as the single queasiest episode of the measles vaccine’s history, they found their first subjects at a state-run school for developmentally delayed children.

The brittle justification sometimes articulated for subjecting these most vulnerable kids to testing was that conditions were bad enough in the institutions that housed them, that infectious outbreaks were abnormally common. If the vaccine worked, in other words, it would do good work here. But the fact was that at this moment in America’s history, institutionalised children were frequently used for science experiments – sometimes without so much as the pretence that it would help them. Ethically speaking, the frontiers of medical science in the middle 20th century were also its lawless wild West2.

It must have been a massive relief when those first human trials showed that the Enders product worked extremely well as a prophylactic against measles infection. At one state school for the intellectually disabled, a measles outbreak hit six weeks after Katz had inoculated 23 children. Many kids, including members of the control group, fell ill, but none of the vaccinated children showed symptoms.

But the Enders inoculation also caused intense side effects. Most inoculated kids got fevers. About half developed rashes. Dr Maurice Hilleman, who ran the pharma company Merck’s virus and cell biology research lab, and who took over the Enders vaccine for further testing, production, and commercial distribution, recalled in an interview with Paul Offit: “It was toxic as hell. Some children had fevers so high they had seizures. The Enders strain was the closest thing there was to a vaccine, but to me it was just an isolate. He hadn’t made a vaccine.”

What makes a vaccine a vaccine? Offering protection against future infection is, of course, of definitional importance. But inoculation with the unaltered measles virus would, unless fatal, also make a patient immune from future infection. Clearly, efficacy is only half the battle. To be a vaccine, then, an antigen needs to be both extremely efficacious and extremely safe.

The Enders antigen represented several scientific leaps in the right direction, but if it was going to be pressed into service to protect the world from measles, it needed work. Hilleman ­– a gruff and brilliant and relentlessly pragmatic scientist from Montana, whose childhood discovery of Darwin had led him towards science and away from the church, but whose dogged Lutheran farm-boy work-ethic stayed with him and propelled him to a career characterised by over-achievement and under-recognition – was the right man for the job.

The first fix was a patch rather than an overhaul. Hilleman brought in a paediatrician called Joseph Stokes Jr, an expert in gamma globulin – the portion of blood plasma that contains antibodies when they’re formed. By 1962, Stokes, Hilleman and the team at Merck had determined that a small dose of gamma globulin injected at the same time as the Enders shot massively alleviated the side effects of the vaccine. Where 85% of inoculated children had experienced fevers in the absence of the immunoglobulin, now just 5% spiked a temperature post-jab.

But the two-part regimen was cumbersome to distribute. Hilleman, who had an unrivalled knack for the tricky business of attenuation and mass production, got to work modifying the Enders strain still further, eventually passing it 40 more times through chick embryo cultures. The resultant, thoroughly gentled antigen – called “Moraten” for “More Attenuated Enders,” and which remains in use today – began to roll out commercially as “Attenuvax” in 1968. By the year 2000, measles had been eliminated in the US.

But by the late 2010s, amid voluble and often misleading anti-vax campaigns, new outbreaks of the virus were springing up across the US, and gaining traction in unvaccinated pockets.

Amid that rising tide of infection, one father who had chosen not to vaccinate his now-adult son regretted his decision. “I can quite understand why some people would say our decision [not to vaccinate] was morally wrong,” said the man, David Edmonston, now a septuagenarian. “I’ve changed my thinking.”

He remembered his own bout of measles, the feverish confusion, the rash – and the researcher who visited him at his boarding school infirmary and offered him a chance to make his mark at the frontier of science – to play a historic, if tiny, role in protecting millions and millions of children worldwide.

It was “such a shame” to hear that measles cases were on the rise again, he told reporters in 2019, as New York declared a public health emergency due to the perfectly preventable virus. “It can be such a nasty disease.”

Today, more than 80 percent of the world’s children are protected with at least one dose of measles vaccine. According to WHO, between 2000 and 2015 alone the measles vaccine saved an estimated 17.1 million lives worldwide.

1. Quoted in Vaccinated: One Man’s Quest to Defeat the World’s Deadliest Diseases by Dr Paul Offit, to which this article is heavily indebted.

"Mission, measles: the story of a vaccine" a film credited to Merck Sharp & Dohme, c1964, and listed as in the public domain by the National Library of Medicine's Digital Collections page