The science behind COVID-19
COVID-19EducationalVideos

My shampoo stinks of vomit: How COVID-19 can mess up your sense of smell

Increasingly, people who are recovering from COVID-19 are reporting a distorted perception of odours, also known as parosmia. 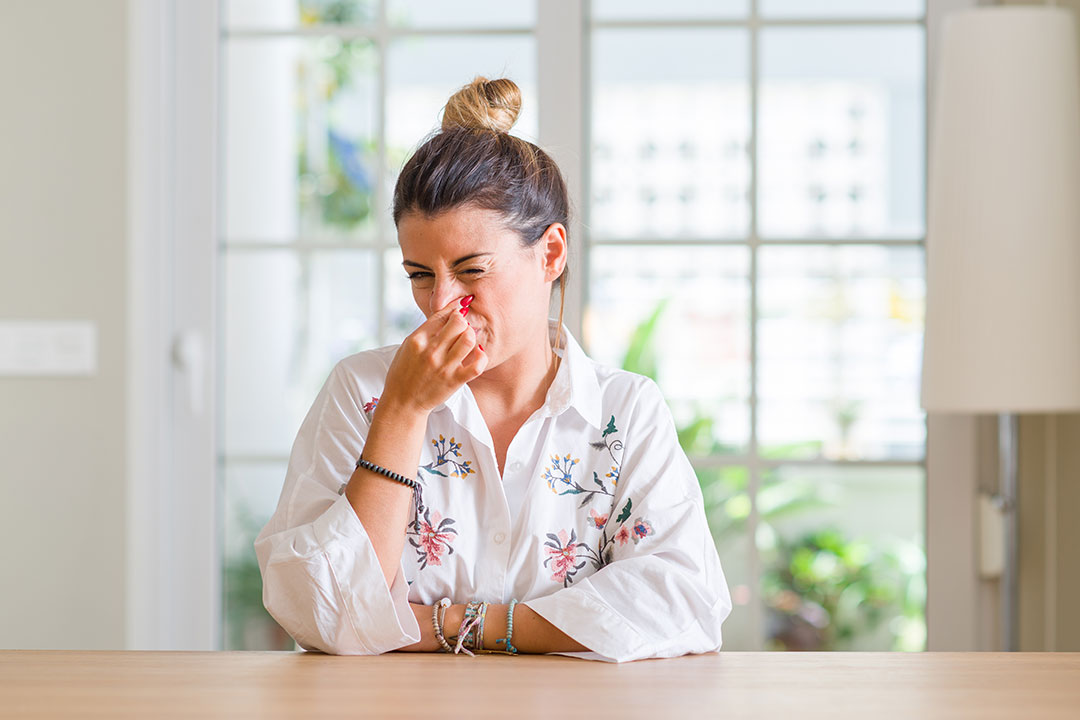 It started with a freshly laundered basket of washing. As I hung it out to dry, I was hit with a sickening odour. Even now, it is difficult to describe it: There’s a hint of vomit or dogs’ droppings, combined with an overpoweringly sweet chemical smell. It is pungent and disgusting, and like nothing I’ve really smelled before.

I tried rewashing the laundry, in case something nasty had found its way onto a trouser leg or into someone’s pocket, but it made no difference. When I bought a different brand of detergent, the smell disappeared. Phew.

I was being hit with this peculiar superpower: the ability to detect sickening odours that no-one else around me could perceive.

But then I noticed the smell on my daughter’s freshly washed hair, when I washed the dishes with a certain brand of washing-up liquid, and when I sprayed myself with my favourite perfume.

That’s when I started wondering if this weird sensory problem might have something to do with the COVID-19 I’d recovered from in early June 2021. Like many people who’ve been infected with SARS-CoV-2, I temporarily lost my sense of smell.

Having written about this phenomenon – known as anosmia – before, and spoken to experts at the British smell loss charity AbScent about how to get your sense of smell back, I started smell training. This involves picking three or four scents that you enjoy or have a connection with, and actively sniffing them twice a day, spending around 20 seconds on each scent. Within a couple of weeks, my smell appeared to have returned to normal, and the headaches and fatigue I’d been experiencing also lifted. I counted myself lucky that I hadn’t developed Long Covid, as many others who have experienced relatively mild bouts of COVID-19 have.

Now, I was being hit with this peculiar superpower: the ability to detect sickening odours that no-one else around me could perceive. I picked up the phone to AbScent, and spoke to the charity’s founder, Chrissi Kelly. It was she who put a name to it – parosmia – and informed me that I was by no means alone.

Mounting evidence suggests that a significant proportion of those who lose their sense of smell and/or taste due to COVID-19, go on to develop parosmia in the weeks or months after their senses begin to return. One recent study suggested that about one in ten of those with Covid-related smell loss reported parosmia when questioned shortly after getting infected, but this rose to 47% when they were interviewed again six or seven months later. Based on current infection estimates, this implies there could be 7 million people worldwide suffering from a distorted sense of smell due to COVID-19.

According to Kelly, parosmia is a sign of recovery, even though it may take months, or years in some cases, to regain a sense of normality.

The way we sense odours is through a cluster of nerve cells called olfactory sensory neurons, located high up at the back of the nose. These transmit signals to a brain structure called the olfactory bulb, which makes sense of them. SARS-CoV-2 appears to attack support cells that these sensory neurons rely on to stay healthy, disrupting the normal organisation of the nasal lining, and damaging the hairlike projections that the neurons use to detect odour molecules.

The leading theory is that, as these neurons begin to regenerate, some miswiring occurs, resulting in disordered signalling, and sensory confusion.

Substances that trigger parosmia vary from person to person, but there are some common culprits. Food is a major one: particularly coffee, meat, onion, garlic, egg or chocolate. Dr Jane Parker and colleagues at the University of Reading have been investigating what it is about coffee that sets so many people off. In one recent study, they separated coffee’s aroma into its constituent molecular parts, and asked people with parosmia to sniff them, as well as unaffected volunteers.

Doing so, identified certain compounds that trigger the same feelings of disgust in many of those with parosmia, but which unaffected people perceive as rather pleasant – describing them as “roasty” or “popcorn-like”. Many of the molecules contain sulphur or nitrogen, and they tend to be ones that the human nose can detect at very low concentrations.

The identification of a common set of triggers proves that people who are experiencing parosmia are not imagining their symptoms. Also, if miswiring of the sensory neurons is occurring, it does not appear to be random, although further research is needed to untangle precisely what’s going wrong. Other people are triggered by shower gel, or toothpaste – although Kelly reassures me that she has also come across people who are similarly triggered by laundry detergent.

Some of the worst cases, involve a distorted sense of body odour – either one’s own or other people’s personal smell. This can lead to paranoia and/or social withdrawal. In some cases, parosmia has even prompted the breakdown of romantic relationships.

Food-related parosmia can also have a significant impact on people’s quality of life, studies suggest. In severe cases, it can trigger vomiting, or loss of appetite, leading to weight loss and/or malnutrition. Others overeat, in an attempt to compensate for the lack of satisfaction they are deriving from food.

Although there’s currently no cure for the condition, besides the passage of time, AbScent recommends that those who are affected become their own detectives, identifying triggers and patterns, and experimenting with what works and doesn’t work to make living with parosmia more tolerable.

If foods are a trigger, then altering the way they are cooked could help. Many of the compounds that Parker identified are generated during the so-called Maillard reaction, which gives roasted, grilled or fried food its distinctive flavour. Techniques such as poaching or using a slow cooker to avoid this browning process may therefore help.

AbScent also stresses that parosmia doesn’t last forever. Those affected may have days when their symptoms are better or worse – as I certainly do – but the trajectory is generally towards recovery.