People who are afraid of needles are twice as likely to be vaccine hesitant, new research shows. 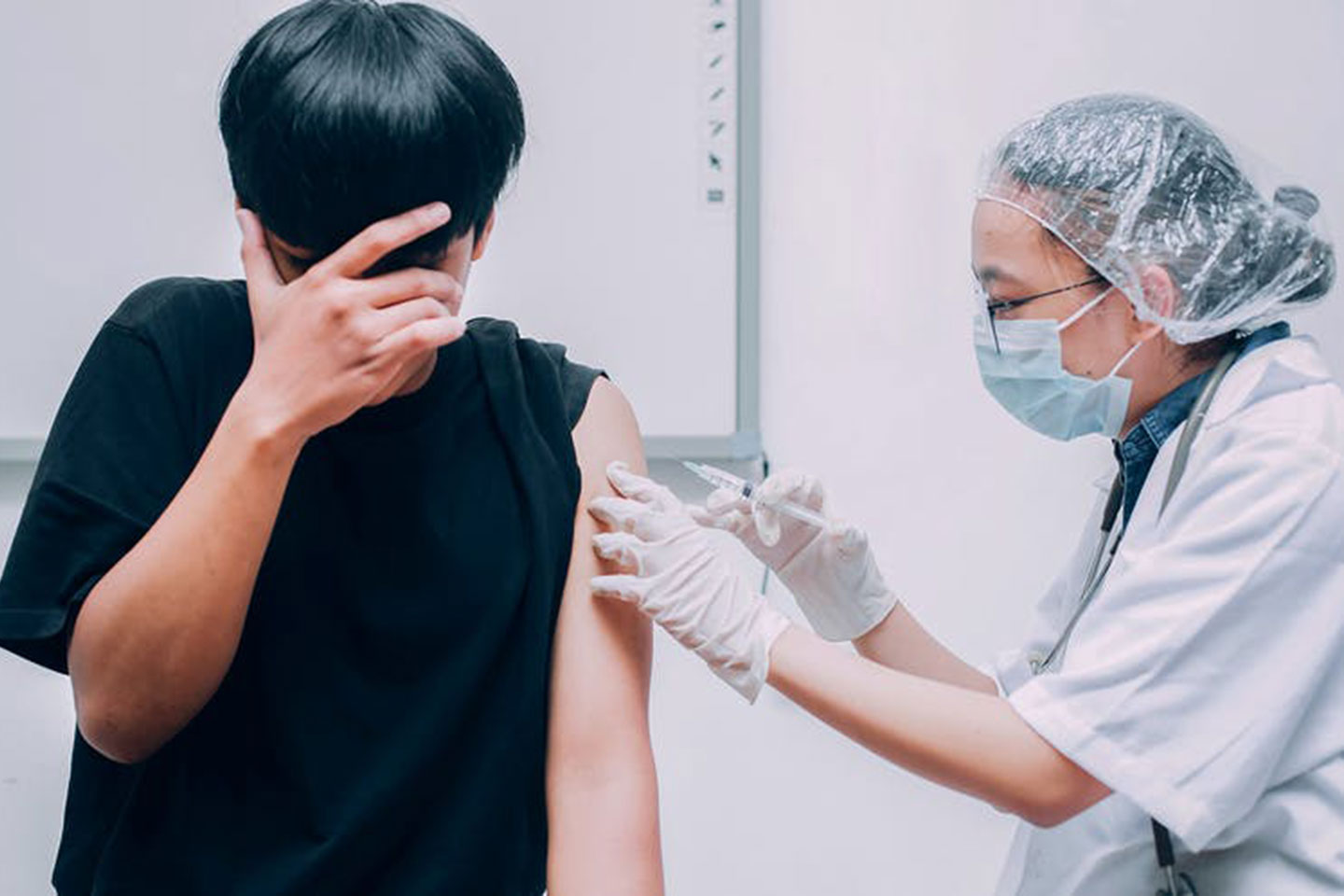 “Your body’s full of veins, isn’t it? Well, you’ve got to fill them up with something, haven’t you?” That’s the mystery of blood, as explained by British comedian Tony Hancock in one of the UK’s best-known comedy episodes, The Blood Donor. But he can’t bear to look at the stuff, still less at the needle that siphons off his precious pint of “AB negative, rhesus positive”, swooning away as the tip touches his arm.

Hancock’s character is afflicted by what’s known as “blood-injection-injury” phobia. Among the anxiety disorders, it’s an anomaly. In moments of acute anxiety, it is common to feel as though you’re about to faint. But that feeling is an illusion. Fainting is the product of a dramatic fall in blood pressure. In moments of anxiety the dial surges in the other direction: blood pressure rockets. That makes fainting an impossibility.

Vaccine hesitancy tends to be a little higher among younger people and certain ethnic minority groups.

Except, however, in cases of blood-injection-injury phobia. Uniquely among anxiety disorders, with this phobia the sight of, say, a hypodermic needle will prompt an initial increase in heart rate and blood pressure, but this may be swiftly followed by a precipitous decline in both (what’s known as a “vasovagal response”). When that happens, some people do indeed hit the deck.

If you’ve experienced this kind of thing, it’s entirely understandable that you’d want to avoid a repetition. But the COVID-19 vaccination programme means that almost everyone has had to – or will soon have to – face the needle. Could a phobia explain why some people say they won’t get vaccinated?

It was something I’d heard from vaccine sceptics, and it made sense. A vaccination centre would be a very public place in which to suffer the embarrassment of fainting. I would certainly think twice about joining a queue if I feared I might suddenly topple to the ground.

To find out what part anxiety might be playing in COVID-19 vaccine hesitancy, we turned to the 15,014 participants in our third Oxford Coronavirus Explanations, Attitudes and Narratives Survey (OCEANS-III). OCEANS is an ongoing project working to provide evidence-based answers for how best to present vaccination information to the public and combat excessive mistrust.

We asked participants to rate their feelings about, for example, receiving an injection, or seeing someone else give blood, or watching surgery on television. We also asked them about their willingness to receive a COVID-19 vaccine. The results have been published in the journal Psychological Medicine.

Our OCEANS participants were selected to be representative of the UK population for age, gender, ethnicity, income and region. A quarter of the group screened positive for a potential blood-injury-injection phobia, which shows just how common the condition is. Strikingly, these individuals were twice as likely to report that they were COVID-19 vaccine hesitant – that is, that they would put off getting vaccinated or indeed never get the jab.

Of course, what we’ve found is an association – causation remains to be established. But because needle phobia is a highly plausible cause of instances of hesitancy, what this suggests is that if we could wave a magic wand and rid people of their injection anxiety, just over 10% of instances of vaccine hesitancy might disappear too.

Vaccine hesitancy tends to be a little higher among younger people and certain ethnic minority groups. But it’s not only vaccine scepticism that’s more common in these groups: it’s injection fears too. This appears not to be coincidental. Though they’re certainly not the main factor, OCEANS-III suggests that injection fears partially account for higher rates of vaccine hesitancy in these demographic groups.

How to fight phobias

When it comes to controlling COVID-19, every vaccination counts. So, what can be done to address injection fears? Quick and effective cognitive-behavioural treatments have been developed – the trick, of course, is to get them to those in need.

These treatments work by gradually exposing the patient to injection-related stimuli until their fears subside. For example, the one-session treatment (OST) developed by Lars‐Göran Öst comprises a gradual progression from repeated pricking of the finger with a mini lancet, to needle insertion without injection, to real injections with saline solution. OST takes three hours to complete and produces lasting results for 80% of people. A version of OST that uses gradual exposure to images and videos of needles and injections and simple handling of a syringe, without actual injections, also works well.

Fainting can be tackled too. First, patients are taught how to recognise the early signs of a dip in their blood pressure. Then, they learn to combat this drop by applied muscle tension: five cycles of tensing muscles in the arms, chest and legs for 20 seconds followed by 20-30 seconds of a normal level of tension.

OCEANS-III indicates that increasing access to these phobia treatments – which can also be delivered effectively in groups – is likely to reduce vaccine hesitancy. Moreover, in the not-too-distant future we may be able to get vaccinated without an injection: a nasal spray version of the Oxford/AstraZeneca vaccine is just one of several being evaluated. The dreaded jab may soon become a sniff or two.

The success of COVID-19 vaccination programmes is dependent on uptake. This makes it critically important to address the concerns of the vaccine hesitant. For the millions of people across the world who are fearful of injections, all it may require is one morning’s phobia therapy or a nasal spray: entry-level treatments that pass the most basic cost-benefit analysis.