More than 150,000 girls across Sierra Leone will have access to the HPV vaccine after the government introduced it into the routine immunisation programme. 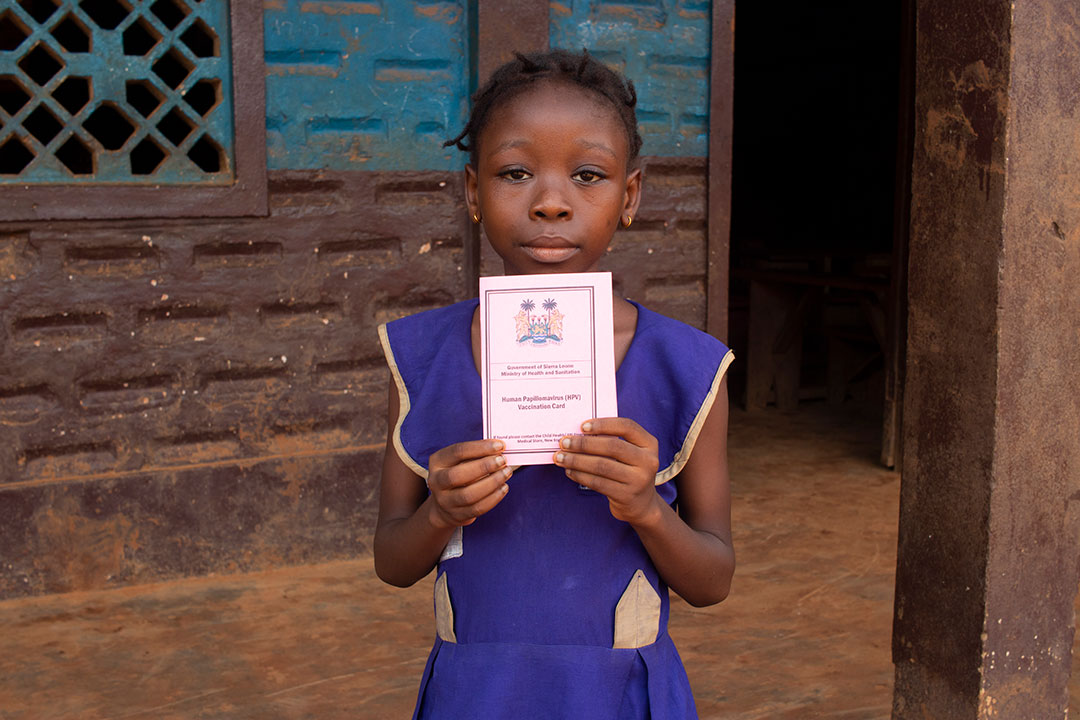 On a warm October morning in Freetown, Sierra Leone, the country’s Minister of Education David Moinina Sengeh is making a passionate call to students and their parents at the national launch of a HPV vaccination campaign. He is calling on parents to register their daughters for HPV vaccination.

"This is a pivotal moment as we seek to eliminate cervical cancer in Sierra Leone. Part of that strategy is vaccination."

Moinina, who doubles up as Chief Innovation Officer, is popular among students and their parents, perhaps due to his youthfulness, or perhaps for his signature dreadlocks and African print shirts. It could also be for his passion for education, youth empowerment and innovation. Whatever the reason for his popularity, he has the room’s attention as students, parents, health sector stakeholders, activists, politicians and journalists follow his words.

His call to action has barely any policy jargon: it’s a heartfelt call featuring a personal tale of a cervical cancer case in his extended family and readiness to have his two daughters vaccinated when they turn ten years old. He assures the young girls in the room that there are no side effects, neither is taking the vaccine against their religious beliefs – whatever they may be. His tone is less of a politician and more of a father, brother and uncle.

After him, Dr Austin Demby, Minister of Health and Sanitation, takes the stage to reiterate the call to action. Dr Demby tells the audience in the room, as well as hundreds of thousands following virtually, that vaccination is their surest weapon against an ailment that continues to claim many lives in the country. It is also an additional tool towards girl child empowerment.

Statistics from the Sierra Leone Cancer registry show that cervical cancer is the second most common (after breast cancer), and biggest killer of all cancers among women aged between 14 and 44 years old.

This is one of multiple ways Sierra Leone is encouraging uptake of the HPV vaccine after its recent inclusion in the country’s routine immunisation programme. Before the launch, similar calls had been made on the radio, television stations, even public address systems on streets.

The call to action is urgent. Statistics from the Sierra Leone Cancer registry show that cervical cancer is the second most common cancer (after breast cancer) and the biggest killer of all cancers among women aged between 14 and 44 years old.

The vast majority of cervical cancer cases are caused by the human papillomavirus, or HPV – a sexually transmitted disease that can go unnoticed for decades before cancer develops. The safe, effective HPV vaccine has been available in most wealthier countries since the 2000s. Gavi, the Vaccine Alliance and its Alliance partners are now working to ensure the vaccine is available to girls across the world: Sierra Leone is the 19th African country to introduce the vaccine.

Health authorities have collaborated with the education sector to use schools for the vaccine introduction, complementing health facilities. Over 1,400 teams of health workers, community mobilisers, school authorities and teachers were involved in the introduction of the vaccine.

The campaign saw the Ministry of Health and Sanitation (MoHS) – with support from Gavi, the Vaccine Alliance, UNICEF and WHO – administer HPV vaccines nationwide through schools, targeting more than 150,000 girls.

According to Moinina, the Sierra Leone government views HPV vaccination as part of girl’s empowerment and is using the countrywide education infrastructure – primary and secondary schools – as access points for the vaccine.

“This is a pivotal moment as we seek to eliminate cervical cancer in Sierra Leone. Part of that strategy is vaccination. The government spends over 20% of our budget on education, ensuring that our children access education, stay in and transition out of school: it will be disastrous for us to invest in children and girls, who then will grow up to have cervical cancer and die just when they are ready to reap the benefits. That is why for us, it’s so critical that our girls can access preventative methods as well as early detection and treatment when necessary,” he explains.

Dr Demby says that the country has ambitious targets following the introduction of the vaccine as part of a strategy to reduce the vulnerability of women to cervical cancer.

“It’s a commitment to do everything we can to protect women of tomorrow. I am hoping that [if] every year we can vaccinate girls from ten years and above, in a few years we can boldly say that anyone that is 20 years and below is protected; that’s our dream and vision,” he says.

Days later, schoolgirls aged ten and above queue up at St Raphael’s Primary School in Waterloo District, a two-hour drive from Freetown, for their vaccination. Thousands of girls across the expansive country will soon join them.