Vaccinating domestic dogs reduces rabies in the wild. Why this matters

Domestic dogs have been shown to be the only species necessary to maintain rabies across most of Africa. This means that dog vaccination should control the disease in all species. 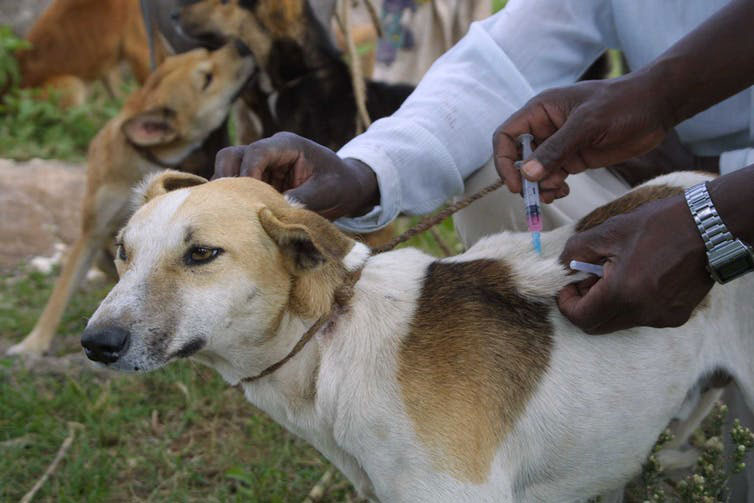 Vaccinating domestic dogs is a successful and cost-effective way to prevent rabies in dogs. Sarah Cleaveland

Every year nearly 60,000 people globally die of rabies, a deadly virus most commonly transmitted to humans by animal bites. Over 99% of these deaths are due to bites from domestic dogs. Rabies is invariably fatal once symptoms develop, so it’s vital that person gets treatment when they are exposed.

Treatment consists of a course of vaccinations known as post-exposure prophylaxis. These are highly effective at preventing rabies when promptly administered. But sometimes people do not seek treatment because they are unaware of the risk of rabies. Even when they know that treatment is urgent, some may still struggle to access it due to its high cost and often limited availability.

Instead of relying solely on post-exposure prophylaxis, an alternative strategy is to focus interventions on the animal populations responsible for maintaining the virus and transmitting it to people. Vaccination of domestic dogs has been shown to be a successful and cost-effective way of preventing human rabies. But it is still not routinely undertaken in the countries worst affected by rabies.

While this is mainly due to lack of investment, concerns are often expressed that wildlife may play a role in maintaining rabies transmission and that dog vaccination may, therefore, be ineffective. This is of particular concern in wildlife-rich areas of sub-Saharan Africa, for example in the Serengeti ecosystem where rabid wild carnivores including hyenas and mongoose have led to human rabies deaths.

Domestic dogs have been shown to be the only species necessary to maintain rabies across most of Africa. This means that dog vaccination should control the disease in all species. But in parts of Namibia and South Africa rabies is thought to be independently maintained in wildlife like jackals and bat-eared foxes.

The purpose of our study was to evaluate the impact of dog vaccination on rabies in south-east Tanzania, where no vaccination had previously been conducted. The study took place from January 2011 to July 2019 in the rural regions of Lindi and Mtwara. Five rounds of domestic dog vaccination campaigns took place between 2011 and 2016, each covering over 2000 villages. These regions contain many areas of suitable wildlife habitat including forest reserves, plantations and the Selous Game Reserve. The regions were selected for vaccination so that the potential impact of wildlife on rabies elimination could be evaluated.

We aimed to collect detailed data on the rabies situation to understand the impacts of these vaccination campaigns. But official figures for rabies deaths often under-report the true burden of disease as most people die from rabies at home and are not counted in statistics. To combat this issue we used data from healthcare facilities to guide extensive contact tracing.

Hospital records of animal bite patients were used to identify people potentially exposed to rabies. We then traced and interviewed these people to determine the details of the bite including the species involved and whether or not the biting animal was likely to have been rabid. During contact tracing, additional bite victims and owners of rabid animals were identified and further traced. So in addition to collecting valuable data, we advised people of the risks of rabies and the importance of seeking care.

Somewhat unexpectedly we found that over 40% of the animal rabies cases that we detected were jackals. This is very unusual given that domestic dogs usually account for the vast majority of cases. We also found evidence of chains of rabies transmission within jackals and frequent cross-species transmission – that is transmission from dogs to jackals and vice versa.

Over the period of widespread dog vaccination we saw substantial declines in animal rabies cases and human rabies exposures throughout the study area. In 2011 we recorded 218 potential human exposures to rabies and 18 deaths. This dropped to just 15 exposures in 2017 and a single death in 2016 and 2019.

Despite the high level of wildlife involvement, vaccination of domestic dogs alone appeared to reduce the risk of rabies in all species. During 2017 there were only 12 reported rabies cases in dogs and 7 in jackals compared to 77 and 74 respectively in the first year of the study. After mass dog vaccination ceased in early 2017, dog rabies cases began to increase in some districts. We suspect this may be due to waning immunity in the dog population.

Why does this matter?

These regions have unusually large proportions of wildlife rabies. But our study still found that domestic dog vaccination reduced the number of rabies cases in all animal species – this also greatly reduced the risk of rabies to people.

If we are to stop people dying unnecessarily from this preventable disease, it is critical that there is continued investment in domestic dog vaccination and the presence of rabies within wildlife should not be seen as a barrier to implementing these programmes.

Sarah Hayes' PhD is funded by the Engineering and Physical Sciences Research Council.

Kennedy Lushasi works for Ifakara Health Institute, in Tanzania. He is affiliated with the University of Glasgow, UK, and is currently, a Ph.D. student in his final year at the Nelson Mandela African Institution of Science and Technology, Arusha-Tanzania.

University of Glasgow provides funding as a member of The Conversation UK.