Stories from the community
COVID-19VideosZero-dose children

All aboard the vaccine minibus: getting immunisation back on track in Pakistan

In Pakistan, a life-saving game of immunisation catch-up is underway after the COVID-19 emergency forced over a million children to miss out on routine vaccinations. 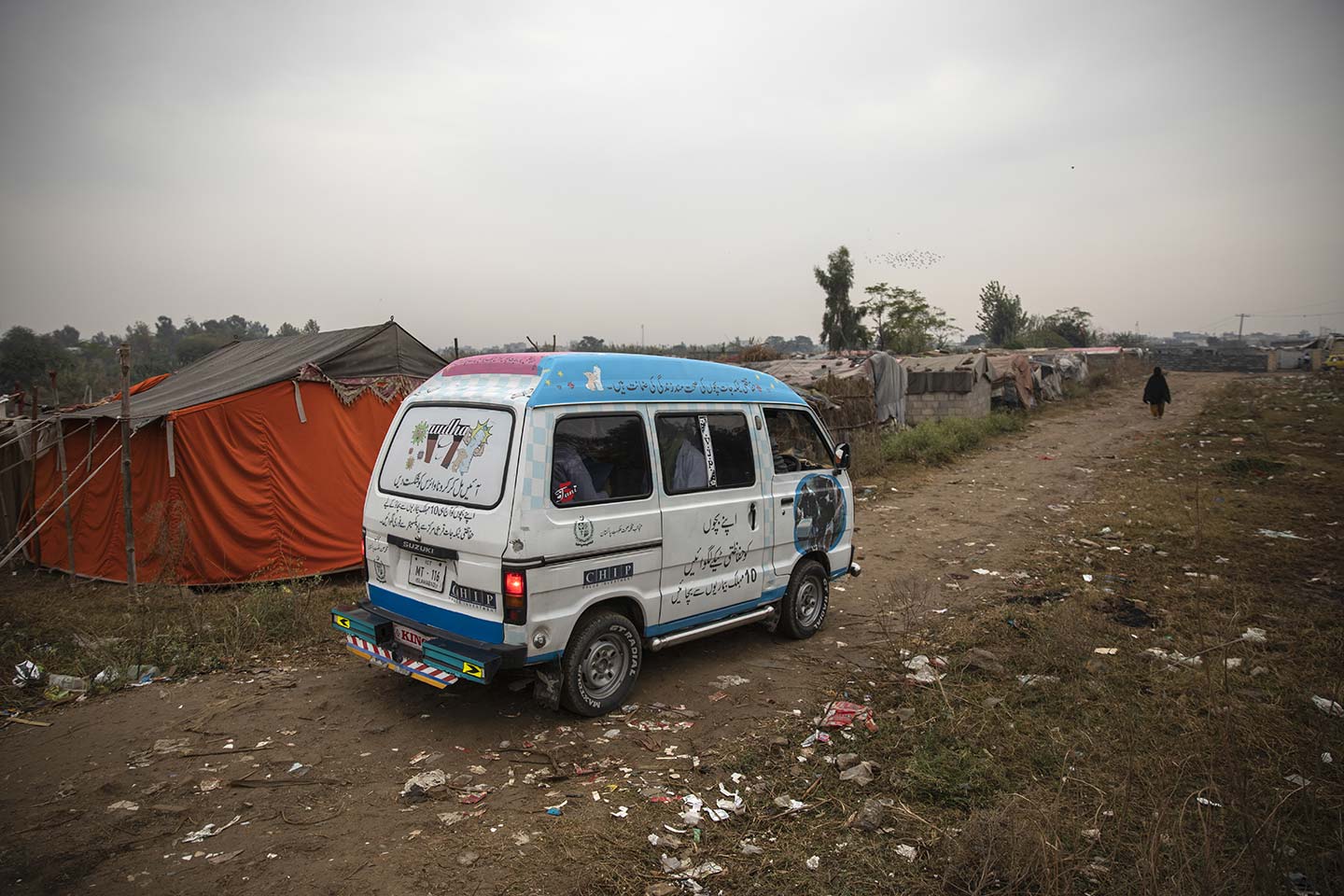 For almost two months beginning in late March 2020, when Pakistan’s provinces began to move into lockdown to contain the swelling numbers of COVID-19 infections, the country’s immunisation programme ground to an abrupt halt. Government vaccination centres and the crucial outposts set up by vaccinators in under-served communities – including ad hoc booths in health worker’s homes, small shops or pharmacies – were shuttered. Weeks passed. The lockdown eased, and vaccinators returned to their posts. But in many places, the demand for vaccination had been stunted by confusion and fear of the new virus.

The trundling Suzuki minibus, plastered pink-and-blue with messages urging the importance of vaccination, often flanked by Farid with a megaphone, is a familiar sight in Mehrabadi.

Fakhira Abid, a vaccinator from an Islamabad community called Mehrabadi, recalled the upset: “Here immunisation coverage was good, Masha’Allah!” she says. Then came COVID-19. “Coverage dropped and became very low. Communities had no idea that immunisation had resumed.”

Though it borders some of the capital’s wealthier neighbourhoods, Mehrabadi is the kind of marginal urban space that can be tricky for vaccinators to serve. A densely-occupied thicket of houses built haphazardly on unpaved lanes, it’s the sort of settlement that is always growing, where the arrival of a migrant family from Khyber Pakhtunkhwa or the poorer south of Punjab might be signalled by the emergence of an additional tarpaulin-skinned dwelling, and in which ten-room tenement buildings are home to ten families.

In July, Sadaf Farid and her colleagues began knocking on doors in Mehrabadi to compile lists of children aged under two, and to take stock of the yawning immunisation gap. “During listing, we came to know that a majority of children were ‘zero-dose’,” Farid told VaccinesWork on a cold late-November morning, referring to children who had not received a single basic diphtheria, tetanus and pertussis (DTP) vaccine. “They were born during COVID-19 and still not vaccinated,” she explained. Some families were too anxious about exposure to the virus to visit the immunisation outposts; others didn’t even know they were there.

Farid, 35, works as a community engagement officer for CHIP, or the Civil Society Human and Institution Development Programme, an organisation that has been partnered with Gavi since 2018. Organisations like CHIP help Gavi better understand the needs of under-served communities such as Mehrabadi, says Mario Jimenez, who has worked on Gavi’s Pakistan programme since 2019. In the early months of the pandemic, that meant helping Gavi figure out how to recalibrate its support to respond to a transformed immunisation landscape. “It was chaotic and complicated,” recalls Jimenez. Hints of the lockdown’s heavy impact trickled in.

“We have seen over and over again how an emergency can lead to a shift in focus away from immunisation,” says Alexa Reynolds, Gavi’s Senior Country Manager for Pakistan. “So no-one was surprised, but it was certainly very concerning – alarming – to see how quickly, and at what scale, immunisation was disrupted by this major health crisis.”

“We now have data to show there was really a tremendous decline, especially in March and April,” adds Jimenez. After decades of improving vaccination coverage, an estimated 1.5 million children across Pakistan missed out on basic vaccines from March to May 2020. Similar patterns across the world induced the World Health Organization (WHO) and UNICEF to warn, last July, that 2020 could be the first year in 28 years that basic immunisation coverage - measured by three doses of a diphtheria-tetanus-pertussis-containing vaccine or DTP3 - could fall globally.

So when CHIP, prompted by local public health authorities, proposed a pivot to the programme, aimed at boosting demand for catch-up vaccination in Mehrabadi and other under-served locations, Gavi agreed.

Mehrabadi’s lanes are muddy after a typical November rainfall, the sky still grey behind the clustered tented homes well after sun-up. Sadaf Farid, wearing a white coat and blue surgical mask, escorts a woman named Nasreen, who carries her unvaccinated baby girl on one hip, to an immunisation outreach centre. Fakhra Abid, the community vaccinator, draws up a dose of pentavalent vaccine in a syringe, and administers it to the child. She issues Nasreen with a brand-new vaccination card, a signal that her daughter no longer numbers among the millions of at-risk unreached children in the world. Immunisation uptake has improved in recent months, notes Abid, thanks to the efforts of community workers like Farid.

“We used the tool of mobile-mic-ing, and used a branded vehicle for the purpose,” Farid explains. The trundling Suzuki minibus, plastered pink-and-blue with messages urging the importance of vaccination, often flanked by Farid with a megaphone, is a familiar sight in Mehrabadi.

Local imams and pastors have been drafted into the information campaign, broadcasting the reopening of Expanded Programme on Immunization (EPI) centres to worshippers in their mosques and churches, and helping to stage vaccine camps for their communities.

Farid and her colleagues have posted signs encouraging parents to invest in the health of their children, and knocked on doors to assure Mehrabadi’s worried mothers and fathers that vaccinators have been outfitted with suitable personal protective equipment (PPE) and guidance on COVID-19 safety measures. “Thus, the confidence of parents had increased,” she says, adding, “I am happy to share that all the children covered in the lists were vaccinated.” In fact, she reports, local vaccine coverage is higher than before the pandemic.

It’s an extraordinary bounce-back, and one that has been replicated in towns and villages elsewhere in Pakistan. “The concerted and coordinated effort - at the federal and provincial levels, along with Gavi’s Alliance partners - to carry out enhanced outreach has allowed the immunisation programme to reach 95% of the children that missed out,” says Gavi’s Alexa Reynolds. “As a result, we are not seeing the dip in coverage that we expected to see this year.”