Ghana became the first African country to receive COVAX doses in February, kicking off a mammoth logistical effort in the country to get these doses to the frontline workers that need them. #VaccinesWork spoke to the cold chain experts making it happen. 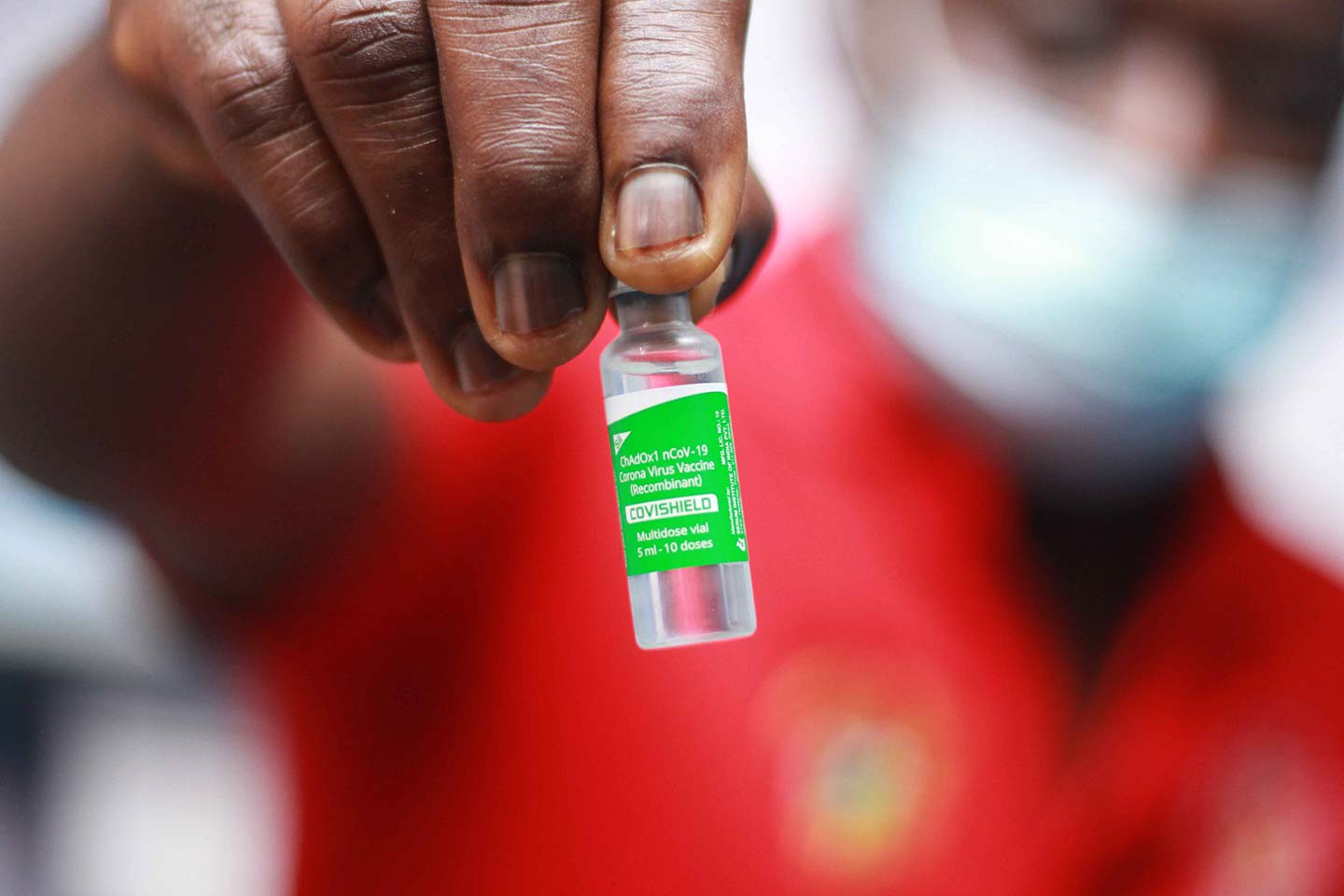 “This is what a vial of Covishield looks like,” Joseph Dwomor Ankrah is saying, pinching a tiny, delicate glass vial with a green-and-white label between thumb and forefinger, and tilting it to catch the glare of the artificial ceiling light. Ankrah, manager of Ghana’s national cold chain, is in a short-sleeved “Ghana health service” polo shirt: he’s accustomed to the chill temperatures maintained inside the 40 cubic metre walk-in fridges of the country’s central vaccine storage facility. It’s early March. Outside, Accra is sunny and touching 34 degrees Celsius.

The vial Ankrah is holding contains one of the most sought-after commodities in the world today: COVID-19 vaccine. Early in the morning of the 24 February, 600,000 doses – 60,000 vials – of Covishield, the Indian-manufactured Oxford-AstraZeneca vaccine, landed at Ghana’s Kotoka International Airport. The tarmac was buzzing. This touch-down was a milestone event, marking the arrival of the first shipment of COVAX COVID-19 vaccines on African soil. Refrigerated vans received the consignment – crates urgently marked “time and temperature sensitive product” – straight off the aircraft and ferried it to these national cold rooms on the site of Korle-Bu Teaching Hospital, Ghana’s premier medical facility.

In other words, they became Ankrah’s responsibility. “It’s a ten-dose vial,” he explains. “When it’s opened, within six hours it needs to be discarded.” This vaccine, like most vaccines, is a fussy customer: to remain potent, it demands precisely-calibrated handling.

The specificity of vaccines’ storage requirements is a major part of what has made COVID-19 immunisation campaigns such a mammoth logistical undertaking. Some COVID-19 vaccines, like Pfizer’s and Moderna’s, call for “ultra-cold” storage. By contrast, the Oxford-AstraZeneca vaccine is relatively low-maintenance: it requires storage at temperatures between 2 and 8 degrees Celsius. Once open, a vial can survive at temperatures of up to 30 degrees Celsius until its six-hour usage window expires.

But in a hot country with an imperfect power-supply, “relatively low-maintenance” goes only so far – and for logistical leaders like Ankrah, COVID-19 has been uncharted terrain. “The scale of COVID-19 delivery is unprecedented – countries have never had to launch so much product, so fast, to such diverse populations, all while navigating an evolving product and pandemic landscape,” says Mike Brison, a cold chain expert with Gavi. “That said,” Brison adds, “countries are experienced at delivering large-scale campaigns for polio, measles and other vaccines, so they are not starting from zero.”

Ankrah, with six years on the job, is not starting from zero. In fact, some of his cold-rooms are 20, or even 30 years old – a challenge in itself, when it comes to maintenance. He opens the chunky latch on the door of the sole walk-in freezer, where his most-exacting charges are housed. In here, there are shelves of pink-packaged Rotavac rotavirus vaccines, and boxes of mOPV2 oral polio vaccine, from a recent campaign.

For the moment, Ghana isn’t equipped to handle ultra-cold-chain vaccines. There are “plans ahead to expand the cold-chain so that in the future we can store more vaccines – both routine and any other vaccines,” Ankrah says. The cold chain is not a static entity – in the past year alone, some 2,343 refrigerators have been added to Ghana’s existing web of cold-points, with the support of Gavi’s CCEOP programme. John Frederick Dadzie, Deputy Programme Manager of Ghana’s Expanded Programme on Immunization (EPI) – and Ankrah’s boss – agrees. “But for now we are making use of what we have.”

What does it take to be a good cold-chain manager? First and foremost, he or she needs specialised, technical vaccine-management know-how, Dadzie explains. But on top of that, “you should be meticulous,” he says – the work demands flawless digital ledger-keeping; every vial of vaccine must be minutely traceable. You should be a strong communicator, too, says Dadzie: the national cold chain manager sits atop a pyramid of regional cold chain managers, who must collaborate to ensure uncompromised relay-race handovers from cold-point to cold-point, down to the health-facility level. Mike Brison says that it’s a role that requires “forecast-style thinking”: anticipating what needs to happen and what might go wrong – and what to do if it does. Ankrah handles the pinnacle role with “passion” and experience, Dadzie observes.

All over the world, preparedness for COVID-19 vaccine roll-out has been a game played to uncertain goalposts: temperature profiles, scheduling of doses, and vaccine volumes all began as unknown quantities to the people charged with making ready for rollout. “We have fortunately ended up with the vast majority of vaccine volumes largely matching traditional vaccines in their storage requirements, but the challenge is still significant and countries have had to be adaptive,” Brison remarks.

The volume of vaccine that arrived at Ghana’s national cold rooms on 24 February was not unheard of. Yellow fever immunisation campaigns of the recent past, for instance, have brought some six million doses of vaccine into the Ghanaian cold chain in a single volley. But the COVID-19 vaccine campaign has operated on a compressed time-scale, according to Dadzie. “It was a relatively short time to prepare – to receive the vaccine and deploy.”

Deployment means movement. Ankrah’s would be an easier task if the job was to care for vaccines within the confines of the Accra cold storage facility – but to ensure equitable access, vaccines must filter out to the remotest districts. Refrigerated vans carry doses to regional cold rooms; from there, pick-up trucks loaded with insulated vaccine carriers transport the vials to district-level fridges. On the periphery, some healthcare facility fridges are hooked up to solar power, Ankrah says. Other remote health centres rely on drones, which deliver vaccines rapidly and on demand, bypassing the requirement for longer-term cold storage on-site.

The first consignment of 600,000 doses of Covishield to land in Ghana were earmarked for 43 districts across three of Ghana’s 16 regions. So far, that rollout “has been very smooth,” Dadzie told VaccinesWork in a recent phone-call. “Demand is great,” he reported. For the cold chain, it’s been “business as usual”. And it will be – until “we start receiving [consignments of] three million doses, or thereabouts”. And when that happens? “We will need to re-strategise,” he says. He sounds unfazed. Keeping cool, after all, is part of the job.