Stories from the community
Vaccine developmentInnovation

With more than 60,000 deaths a year worldwide, snakebite is an overlooked global health concern. In Sri Lanka, a team of scientists and snake-wranglers is developing a library of local antivenom to tackle the threat. 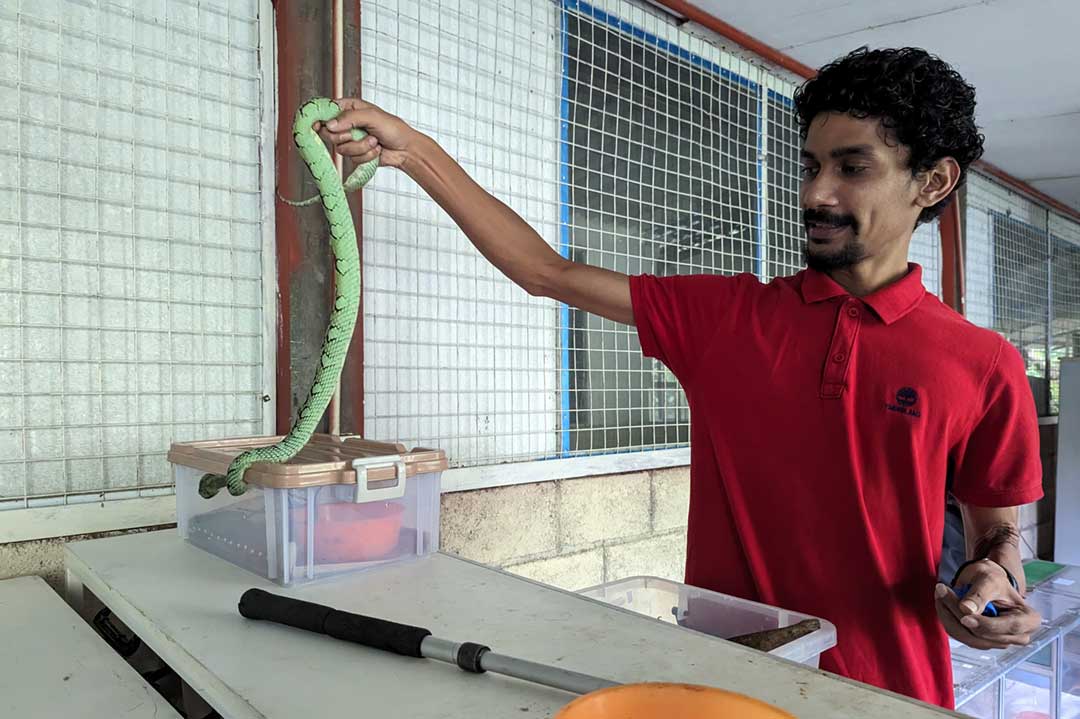 When in 2019 a green pit viper sank its fangs into Nimantha Abeyrathne's arm, he wasn't very surprised. This was not the first time a venomous snake had bitten him. Snakebites are a hazard of his job: Abeyrathne is a curator at the Serpentarium in Hanthane, in Sri Lanka's Central Province.

But what he wasn't quite ready for was just how damaging the venom of the green pit viper, an indigenous species to Sri Lanka, would prove to be. Abeyrathne would spend a full month in treatment at a government hospital in Peradeniya, near Kandy.

"I had severe symptoms – compartment syndrome – like seen in cobra bites. This was the first time I experienced something like this," he recalled. It was also the moment that Abeyrathne realised how crucial his work was.

For a few years now, Abeyrathne has been aiding a team from the University of Peradeniya to develop an antivenom suitable to treat bites from snakes commonly found in Sri Lanka.

In the island nation, "we rely a lot on antivenom imported from India," says Dr RPVJ Rajapakse, Chair Professor at the Faculty of Veterinary Medicine and Animal Science at the University of Peradeniya – a leader of the team working on producing home-grown antivenom since 2017.

He says that antivenom produced in India does not work well to treat snakebites in Sri Lanka.

"The Indian antivenom works well for snakes found in India. The problem is that this antivenom does not work effectively here. We usually give more antivenom vials to complete the treatment of a patient here," Rajapakse says.

Rajapakse adds that previous research has found that cobra venom can differ from one locality to the next – even within the same landmass. Indian snakes, as such, might produce a quite distinct toxin from their Sri Lankan counterparts.

Then there is the question of the great diversity of snakes native to the country. Sri Lanka is home to ten of the 19 snake families present in the world, Prof. SAM Kularatne points out in his book Snakes, Snakebites and Envenoming in Sri Lanka. The full list comprises "47 genera and 101 species including 15 species of sea snakes", he says, adding that four species – Russell's viper, cobra, common krait, and the hump-nosed pit viper – are responsible for most deaths from snakebites in the country.

According to the country's Health Ministry, in 2019 there were 34,239 cases of snakebites reported to state hospitals. However, a doctor attached to the Expert Committee on Snakebite (ECS) of the Sri Lanka Medical Association the annual snakebite incidence is as high as 61,000. The Health Ministry shows that around 50 have died after being bitten by snakes in 2019, and the doctor from the ECS says about 200 succumb to complications from such incidents. The numbers differ because not all victims go to state-run hospitals.

Against this backdrop, Dr Rajapakse and his team of seven started collaborating with a WHO-recommended laboratory in India to produce antivenom. Dr Rajapakse says that they had to work with an Indian laboratory because Sri Lanka lacked the infrastructure. So, an agreement between the University of Peradeniya and India's Premium Serums and Vaccines Pvt. Ltd was signed – and work commenced.

The group got ethical clearance from the Wildlife Department to keep snakes in a serpentarium. However, their biggest challenge was catching the venomous snakes from across the island.

"We advertised in the paper asking people to let us know or bring us the snakes. We also travelled to catch the snakes ourselves. It was not an easy task. Some people even objected to us catching them because they didn't know what we were doing," Dr Rajapakse recalls.

The team had to travel to Jaffna, about a seven-hour journey from Peradeniya, to catch saw-scaled vipers that live in beach areas. They also had to work at night because Sri Lankan kraits are nocturnal.

After checking the weight, volume, and total protein content from a sample, and ensuring the venom is not contaminated, the team freeze dries it into a powdered form. Then this powder is sent to the Indian laboratory where similar tests are conducted to guarantee quality.

"There they mix the venom and inject it into horses. They must do this for at least six months in small doses to get the maximum antibody level," Dr Rajapakse says.

When the time is right, blood is drawn from the horses, and kept in a cold room overnight. The next day they separate the plasma.

"This plasma is processed to separate the globulin which is the antibody against the venom. Again, freeze-dried powder is made from them and the end product is sent back to us," Dr Rajapakse says.

The team is expecting to run a clinical trial in about a month with the necessary government approvals.

"The biggest challenge for us is getting approval from the government sector. We had to wait for months to get clearance for our work," Dr Rajapakse adds. 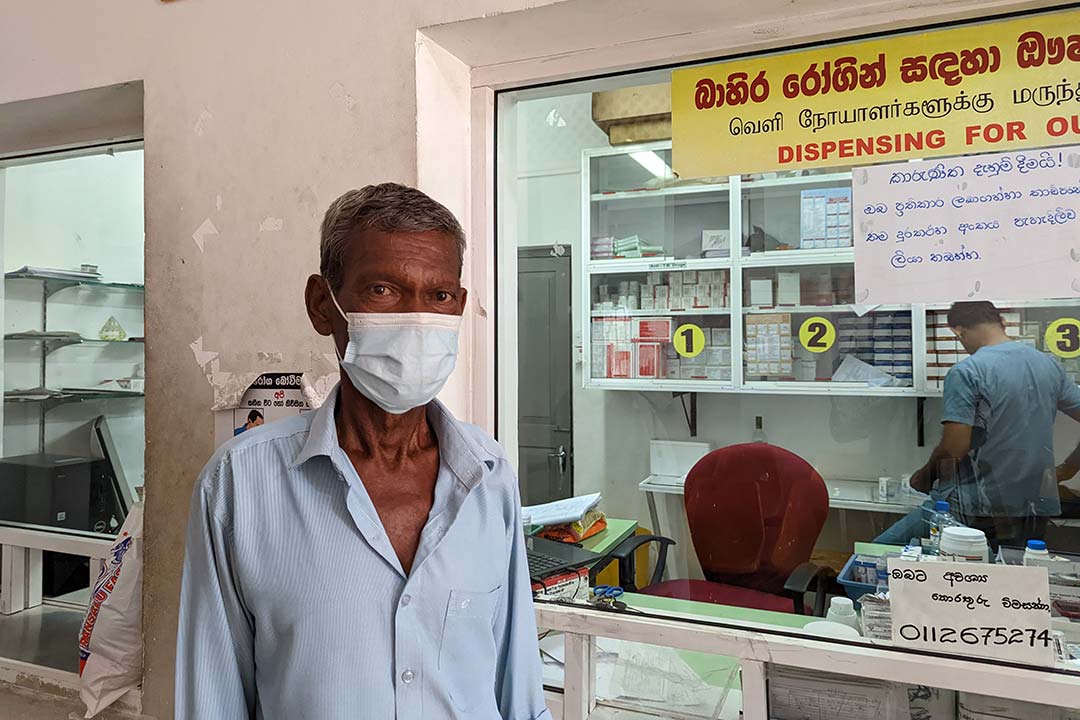 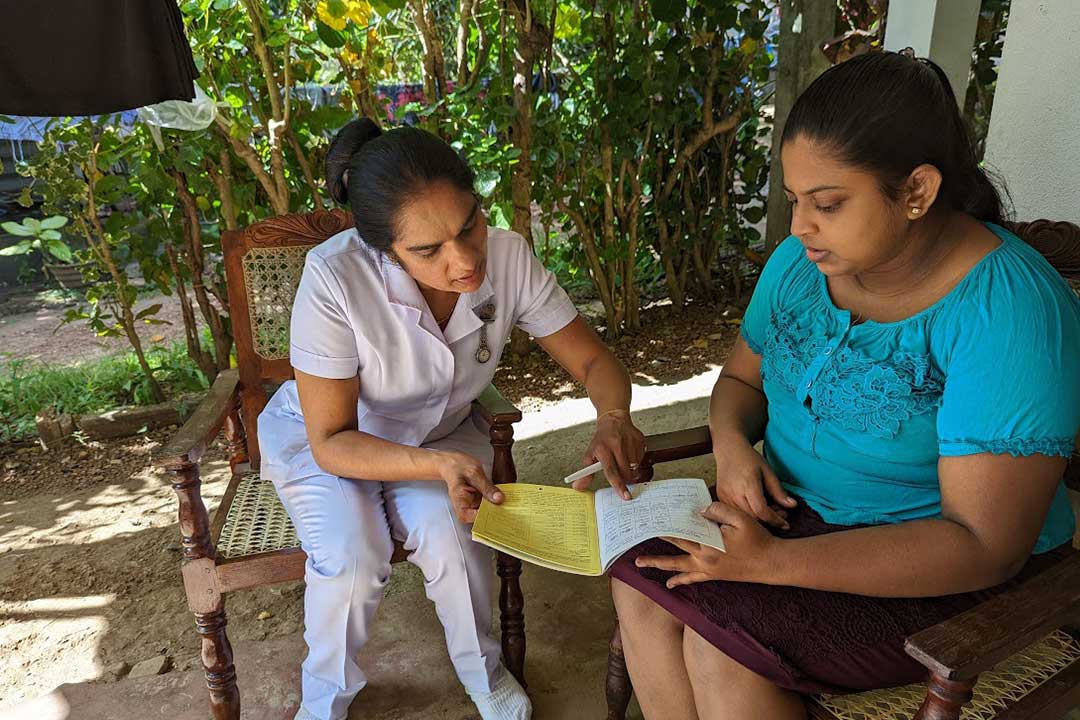