Wastewater surveillance is increasingly used to track COVID-19 infections and the spread of new variants. Linda Geddes speaks to Dr Angela Chaudhuri about the Bangalore-based initiative she helped establish, which she hopes could provide a blueprint for systematic disease surveillance in resource-constrained environments. 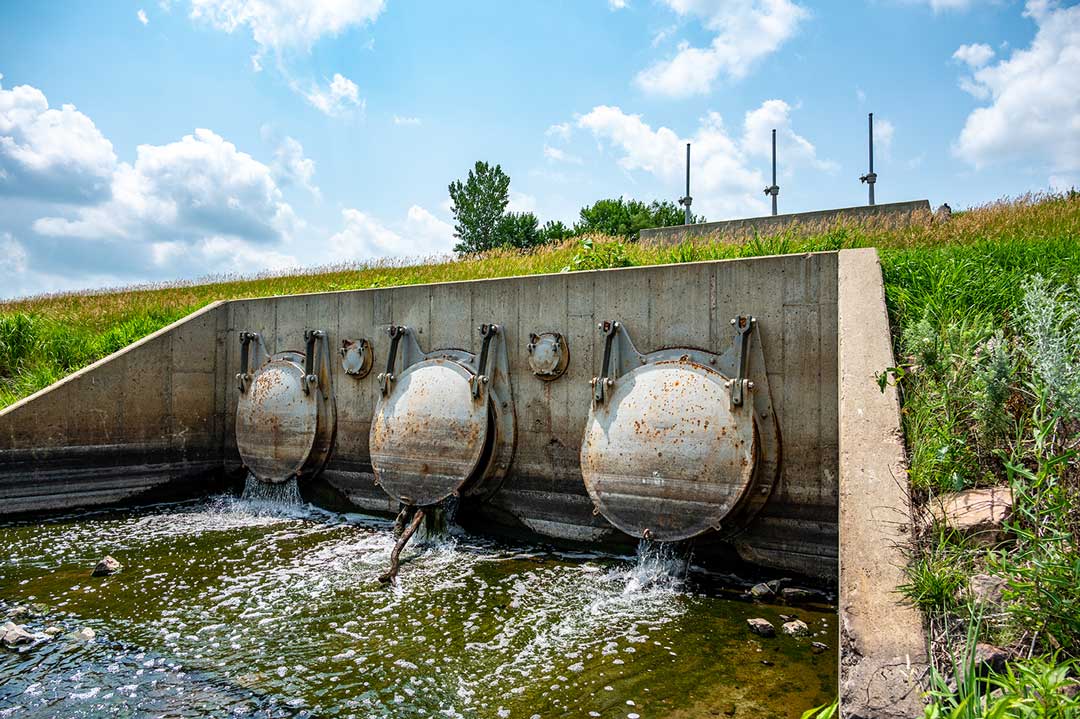 As occupations go, it is hardly the most glamorous: kitted head-to-toe in blue plastic overalls, facemask, visor and gloves, a wastewater expert perches on the edge of an open drainage canal, surveying the murky water.

By analysing the trove of infectious organisms evacuated from our bodies, scientists are already able to predict surges in COVID-19 infections more than a week ahead of conventional testing.

It is 07:00, and the weather is a pleasant 23°C: not yet hot enough to make the protective equipment too uncomfortable, or amplify the stench of the muddy mix of household wastewater, industrial effluents, rainwater and raw sewage sluicing through. Using a bottle attached to an improvised fishing rod, the sample collector fills the vessel, records its pH, disinfects and seals it, before respraying it with disinfectant and placing it in an icebox, ready to be transported to the laboratory.

This unusual fishing expedition could be the future of global disease surveillance: the open drains crisscrossing Bangalore’s outer suburbs and slums act as a collective bowel for a significant part of the city’s 13 million inhabitants, making their contents the epidemiological equivalent of liquid gold. By analysing the trove of infectious organisms evacuated from our bodies, scientists are already able to predict surges in COVID-19 infections more than a week ahead of conventional testing. In the future, this burgeoning infrastructure could be piggybacked to monitor the spread of other infectious diseases – from typhoid, cholera, and rotavirus, to an as-yet-unknown Disease X.

Dr Angela Chaudhuri, a public health specialist, was working on a comprehensive COVID response for Swasti Health Catalyst, when the COVID-19 pandemic struck.

“As soon as COVID-19 hit our shores, we knew that there would be a shortage of tests, and that we’d struggle to accurately estimate how many people really had COVID – especially among the most marginalised communities,” she says.

Swasti co-founded the COVIDActionCollab – a partnership of more than 300 organisations set up to support India’s pandemic response. Chaudhuri says: “A bunch of us got together and asked, ‘how will we really know how bad COVID is in real terms, when the access to testing is poor? How will we know how slum populations are affected when don’t understand the situation or know where to go to get tested or even trust the system?’ Because you can't stop transmission if you don't get tested.”

One solution they came up with lay in what had hitherto been considered waste: sewage. The idea of using it to track disease wasn’t entirely new. Wastewater-based epidemiology played a vital role in the eradication of polio from India in 2011, and the country continues to monitor wastewater for poliovirus at 52 wastewater treatment plants and catchment areas across the country. Doing so has enabled the authorities to strengthen immunisation campaigns where needed, such as in 2018, when traces of wild poliovirus were detected in sewage from Mumbai, preventing this localised outbreak from spiralling out of control.

Already, the initiative has provided four early warnings of COVID-19 infection spikes – the latest of which occurred in late December 2021. When cases are high, the team is also able to pinpoint which variants of SARS-CoV-2 are circulating, and in roughly what proportions.

In March 2020, scientists at KWR Water in the Netherlands reported detecting genetic material called RNA from SARS-CoV-2 in wastewater, correlating this with the prevalence of disease at different times. Inspired by this, Chaudhuri and her cousin, Dr Indranil Nandi, began to wonder if sewage might similarly provide early warning signals about the spread of COVID-19 in India.

However, Bangalore isn’t Amsterdam. Although it has a good sewage system compared to many cities in low to middle-income countries, much of Bangalore’s sewage is transported to wastewater treatment plants via open drainage canals, rather than through closed underground pipes.

“We thought, you know, The Netherlands has a fine and sophisticated sewage system – but would it be possible to just go to the nearby drain, and see whether COVID is floating around in there?” Chaudhuri says.

Armed with some bottles, an ice box and protective clothing, they began to experiment – going out into the city to see what they could collect, and what it contained. Their focus was on the city’s open drains – “little rivers of stinky water”, as Chaudhuri describes them – measuring 6ft to 50ft in diameter. “It was fun and disgusting at the same time,” she recalls.

They were elated to find remnants of SARS-CoV-2 in these wastewater samples – even more so, when they realised their measurements could predict peaks in COVID-19 infections seven to ten days ahead of time. By August 2020, they had demonstrated that RNA from SARS-CoV-2 could also be detected during the rainy season, when wastewater is diluted, and in the presence of industrial effluents. So as long as there was human sewage, a signal could be found.

“We were overjoyed, because if we can get an early warning of an outbreak from an open drain, it means that cities in low and middle-income countries can potentially adopt environmental surveillance, says Chaudhuri. “It is not only for those cities with sophisticated drain systems.”

Even so, there are some differences in what can be achieved. In countries such as The Netherlands, sewers have very specific catchment areas, meaning you have a rough idea of which households drain into that spot. Although this can’t identify individual households with COVID-19, it can identify certain neighbourhoods as hotspots.

“In Bangalore, many areas have large drains, and not everyone lives in houses – sometimes people are pooping in the open,” says Chaudhuri. “So that's the basic difference: It's not a sophisticated drainage system where you can map these households to these sewers, so you can’t do hot-spotting.”

Convincing city officials of the system’s worth has been difficult. “It took us almost a year to convince them this is something that is going to be useful. That it is going to save them money. And it’s certainly going to save lives.

“Their priorities were different and they wanted to know who specifically had COVID-19. We kept telling them, ‘We're sorry, we can’t – but we can tell you that more and more sites are turning COVID-positive, which means there is a rise in cases and you’ve got to prepare.’ We can also say, ‘Hey, the cases are evening-out, and we think we’ve passed the peak, so you can put your resources somewhere else.’”

Even so, the team managed to obtain enough funding from The Skoll Foundation and USAID to expand their pilot into a city-wide programme, known as the Precision Health initiative.

Each morning between 06:00 and 07:00, sample collectors are sent out to 46 sites across the city – selected for their ability to catch a representative sample from a significant slice of Bangalore’s population. Each site is visited twice a week, and the turnaround time for processing samples is less than 24 hours.

It can be smelly work – but not in the way you might imagine: “Because the wastewater also contains industrial effluents, it can be very strong-smelling, but it is not necessarily like the smell of poop,” Chaudhuri says.

Glamorous it isn’t, but sewage surveillance certainly has the potential to save lives.

Processing happens in a central laboratory: First the samples are registered by scanning a QR code on the bottles. Next, the samples are deactivated in a hot water bath to protect the health of laboratory staff, then any RNA in them is isolated and concentrated. Finally, this RNA is screened for the presence of genetic markers specific to SARS-CoV-2. If the virus is present, the sample is retested to establish the concentration of virus, which is compared to previous results to establish whether COVID-19 cases are rising or falling in that area of the city.

When the results come in, they’re uploaded to a central dashboard, and then shared with the city authorities, and publicly via WhatsApp and Twitter. They are also communicated to housing, health and social welfare partners on the ground: "We’re able to say, ‘Look, we found this, it’s time to plan because it’s going to hit us very soon, and we’d like you to take additional precautions,” Chaudhuri says. “For example, some local NGOs on the ground changed from using cloth masks to disposable ones, and stopped unnecessary travel and exposure. Local news reporters also follow our Twitter account and put these warnings into articles. I’m sure others made use of that information.”

Already, the initiative has provided four early warnings of COVID-19 infection spikes – the latest of which occurred in late December 2021. When cases are high, the team is also able to pinpoint which variants of SARS-CoV-2 are circulating, and in roughly what proportions. Omicron was found in early January.

Precision Health is now in talks with donors about expanding it to other cities in India: Their goal is eight cities by the end of 2022, and 25 cities by end of 2023, all operating under a single digital backbone to enable nationwide analysis.

However, Chaudhuri hopes COVID-19 is just the start of a national movement. “We used Bangalore as a pilot to see whether this actually works, but we want to mainstream environmental surveillance as a public health tool for planning and programming.

“Importantly, we are moving past COVID-19, and looking into typhoid, cholera, rotavirus – those pathogens that can be isolated and identified through wastewater surveillance, and are amongst the biggest killers in our country – and, of course, the hidden pandemic, which is anti-microbial resistance.”

Assuming it works, their model could also be exported to other low- and middle-income countries, or even piggy-backed in the event of another pandemic: “I’m sure that’s the first thing we’d do,” Chaudhuri says.

“By identifying spikes and clusters, you can ensure you have the medicines, and that you can direct them to the outbreaks. You can also guide the public, in terms of advising them to look out for symptoms, consult a doctor, or get tested.”

Glamorous it isn’t, but sewage surveillance certainly has the potential to save lives.