Tales from the past
TyphoidEducational

The tragedy of Typhoid Mary 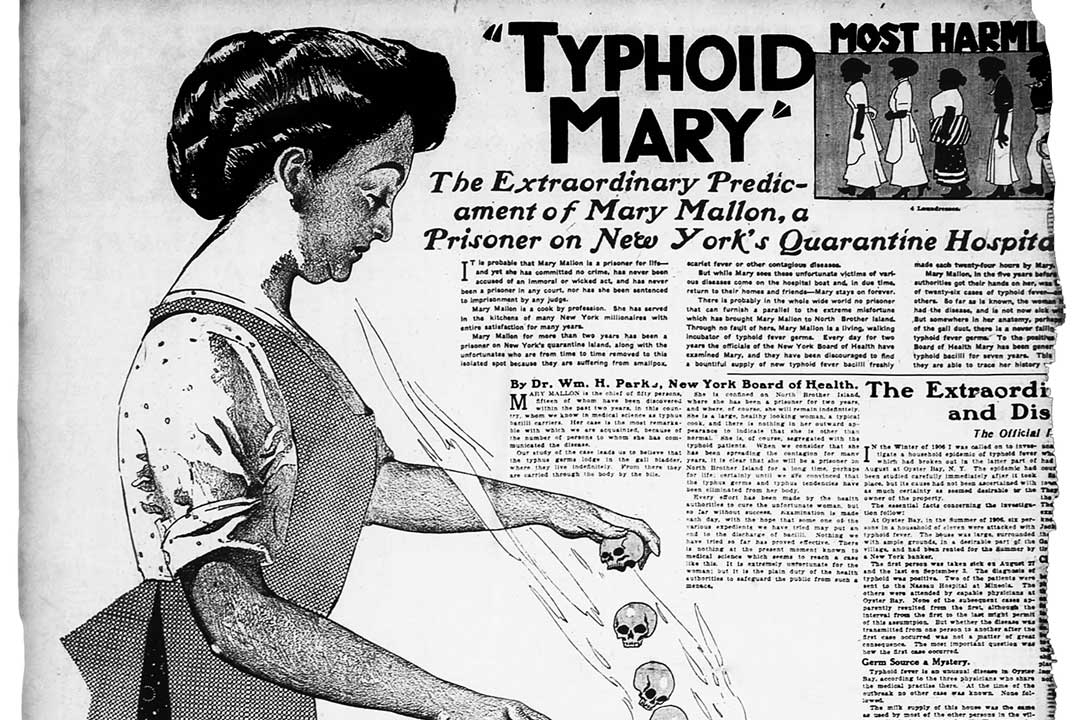 A 1909 depiction of Mary Mallon, known as “Typhoid Mary,” published in the New York American

North Brother Island is a 16-acre teardrop of land in New York’s East River, halfway between the Bronx and that more famous prison isle, Riker’s. Today, the island is abandoned, a sanctuary for water birds. The red-brick buildings of the old Riverside Hospital are gap-toothed, littered with decayed furniture, suffocating in kudzu. The facility was shuttered in the 1960s, but before that it enjoyed a varied career sequestering the sick: smallpox patients, tuberculosis sufferers, teenage drug addicts. For more than a quarter of a century, it also enforced the isolation of a woman, neither patient nor convict, known as Typhoid Mary.

4% of people continued to harbour bacteria in their bodies after recovering from typhoid infection, making them the possible sources of new outbreaks.

Mary Mallon, an Irish immigrant, was thirty-seven years old when she first arrived on North Brother Island in 1907 and, unlike other hospital inmates, showed no symptoms at all. Her captivity in a one-roomed bungalow there struck her as an unjustified imprisonment. In 1909 she wrote to a reporter: “I never had typhoid in my life, and have always been healthy. Why should I be banished like a leper and compelled to live in solitary confinement with only a dog for a companion?”

The plainest answer was that Mary, a domestic cook, was considered a public health threat. In the summer of 1906, she had taken a job working for the family of a banker called Charles Henry Warren in Long Island. In August, six members of the Warren household fell ill with typhoid fever, a disease that would kill 13,000 people in the USA that year. However it was more commonly associated with slum settlements than ritzy Oyster Bay communities. Not long afterwards the landlord, fearing for his rental income, hired an investigator to trace the root of the surprise outbreak.

The investigator was George Soper, a civil engineer with experience tracking the epidemiological progress of typhoid. He checked that the household’s milk supply was sanitary and tested a theory that the well-water was contaminated. He conducted interviews, stitched together a timeline, and hit upon his chief suspect. The onset of typhoid, he learned, had shadowed the arrival of a new cook. Moreover, he was told that Mary Mallon had regularly prepared an ice-cream dessert topped with fresh peach slices – uncooked food, Soper knew, would act as an ideal vehicle for Salmonella typhi, the disease’s causative bacterium.

Soper dug deeper into Mary’s past, and uncovered an arresting pattern: “In the last ten years she has worked for eight families to my positive knowledge,” he would write in 1907. “In seven of these, typhoid has followed her. She has always escaped in the epidemics with which she has been connected.”

Soper turned up at the Park Avenue home of Mary’s new employer in March 1907 and told her she was spreading typhoid; he demanded samples of her faeces, urine and blood. Mary, who felt perfectly well and had probably never heard of ‘healthy carriers’ of infection, a new concept to scientists of the time, dismissed his declaration as ridiculous and sent him packing, brandishing a fork. Frustrated, Soper brought his investigative notes to the city health authorities. They drafted in the police. When forced testing revealed that Mary did, indeed, have high levels of typhoid bacilli in her stool, she was sent away to North Brother Island.

Not every contemporary considered her imprisonment fair or necessary. In 1909, W.P Mason of the Rensselaer Polytechnic Institute wrote in Science that an estimated 4% of people continued to harbour bacteria in their bodies after recovering from typhoid infection, making them the possible sources of new outbreaks. “There are at the present moment probably 560 such persons in the state of New York… We cannot keep in detention all these people, then why single out and imprison one.” The following year, a judge agreed: Mary was released on the condition that she no longer work as a cook.

But in 1915, when an outbreak of typhoid at the Sloane Maternity Hospital sickened twenty-five and killed two, Mary Mallon was found to be employed in the kitchens there. Public opinion turned on “Typhoid Mary”. “This human culture tube,” one reporter called her; “a walking typhoid fever factory” wrote another. She was sent back to North Brother Island, and twenty-three years later, died there, alone.

The COVID-19 pandemic has made the concept of quarantine abnormally normal today – a fact which blunts its edge: solitude is less lonely when it’s collective. But COVID-19 has also underlined the fact that epidemics tend to sharpen existing social inequalities, as well as resurfaced the risk of identifying certain communities with the pathogenic threat.

Was it all too easy to make an immigrant, working class woman culpable for - even synonymous with - a disease? In 1919 George Soper urged his peers to be careful in how they chose their cooks, all of whom, he implied, smuggled the threat of covert contagion. “We ordinarily know very little about them,” he wrote. Medical historian Judith Walzer Leavitt writes, “Mary Mallon was not isolated because she was female, but her womanhood was an important factor contributing to what happened to her”. Nor was she locked away because she was a Catholic, Irish-born, single, working woman, says Leavitt – but to the middle-class professionals she encountered, these social identifiers “created a set of expectations and evoked certain prejudices…. Which together helped lead to their perception of her as deviant and expendable.”

By the time of Mary Mallon’s death, hundreds of healthy carriers had been identified. At least one man, the owner of a New York bakery, had, like Mary, broken injunctions against working with food. Only Mary was imprisoned.