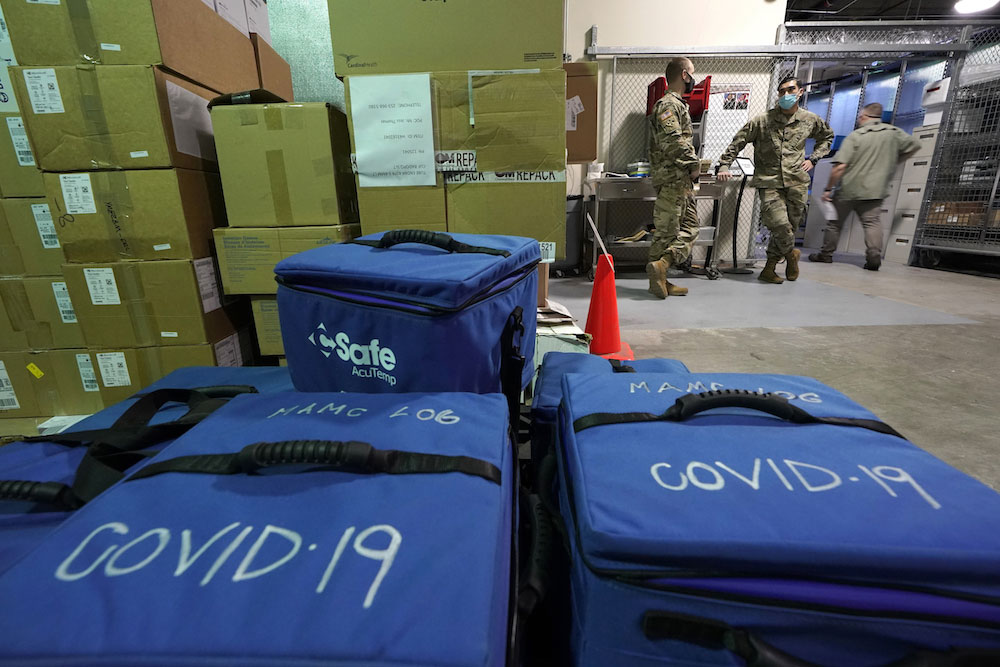 Cooler bags in the Madigan Army Medical Center at Joint Base Lewis-McChord that will be used to transport vials of the first shipment of the Pfizer vaccine for COVID-19 to other locations in the hospital. Courtesy of Ted S. Warren/Associated Press.

The COVID-19 pandemic has killed more than 1,600,000 people worldwide, more than the population of Philadelphia, and it could kill far more if it isn’t brought under control. A number of vaccines that have been highly effective in preventing symptomatic COVID-19 in clinical trials are now rolling out in the U.S. and other countries. This development offers hope that a safe and effective COVID-19 vaccine could soon be available for worldwide distribution—and, potentially, could save millions of lives around the world. However, beginning to distribute vaccines isn’t enough; it takes many steps more to get it into widespread use. The story of the donation and distribution of a new vaccine during the 2009 H1N1 influenza pandemic suggests that rolling out and distributing the new COVID vaccines globally—beyond wealthy countries like the U.S. and Britain—will be challenging.

In April 2009, public health agencies detected a new swine flu strain in North America. This worried them, because billions of people around the world had never been exposed to this novel H1N1 influenza strain. Their lack of immunity, combined with the virus’s ability to easily spread from person to person, created conditions for a pandemic estimated to have killed hundreds of thousands of individuals worldwide in its first 12 months. The situation was analogous to where the global population found itself in early 2020: lacking immunity to SARS-CoV-2, the virus that causes COVID-19.

Global distribution of COVID-19 vaccines could potentially help prevent a great deal of death and disease, but careful planning and preparation will be needed to fully capitalize on that potential.

H1N1 turned out to be not as deadly. But much as we’ve seen in the past year, as soon as public health authorities identified and understood the makeup of the virus causing the disease, pharmaceutical companies began to develop vaccines to protect against it. This work built on existing seasonal influenza vaccines, which accelerated the work considerably because their safety and effectiveness were already well understood. As a result, H1N1 pandemic influenza vaccines first became available for general use a mere six months after the pandemic was identified.

Pandemic H1N1 vaccines first became available in rich countries like the United States, which started vaccinating citizens in early October 2009. Rich countries had set up contracts with influenza vaccine manufacturers prior to the pandemic, but low and middle income countries had not—so to help fill that gap, the World Health Organization (WHO) organized a system for coordinating donations of vaccine and funding to countries like Afghanistan, Ghana, and the Philippines. The first countries began receiving donated doses three months after the vaccine became available.

WHO’s $56 million attempt to organize international support for these vaccination efforts was unprecedented. During the previous influenza pandemic in 1968, countries had been left to their own devices to gain vaccine access. Most didn’t act, because vaccinating adults—for pretty much any kind of disease—was a rarity in many places around the world, and remained so for decades. As a result, efforts to globally deploy the new H1N1 vaccine as quickly as possible in 2009 encountered many challenges. The supply of vaccine was limited, especially in the first few months. It took time to scale up, in part because manufacturers encountered problems with production. Making a flu vaccine relies on growing influenza virus in chicken eggs and then using chemicals to inactivate the virus so it can’t sicken patients who receive the vaccine. But the pandemic H1N1 virus used to make the vaccine did not grow as well in eggs as the virus used to make seasonal influenza vaccine. As a result, the yield of vaccine per egg was lower than expected. This slowed vaccine production, since many manufacturers could handle only a set number of eggs at a time.

The story of the donation and distribution of a new vaccine during the 2009 H1N1 influenza pandemic suggests that rolling out and distributing the new COVID vaccines globally—beyond wealthy countries like the U.S. and Britain—will be challenging.

What’s more, early production planning and financing had been geared toward rich countries that had existing agreements with manufacturers and established systems for delivering the influenza vaccine on an annual basis. Countries who received donated vaccine, most of whom had little to no experience with influenza vaccines, needed time to develop plans for using the vaccines, to apply to WHO for vaccine, and to grant customs clearance. Identifying which people should receive the vaccine, how to contact them, and how to store and move the vaccine within a country posed hurdles, too. In many countries immunization systems were geared entirely toward vaccinating young children, which meant health workers had difficulty providing vaccines to the health care workers, pregnant women, elderly adults, and immunocompromised adults who were also considered at high risk from influenza. If children received vaccines at government-run clinics while adults received medical care at private clinics, for example, officials would need to incorporate private clinics into vaccination efforts, often for the first time, or steer adults toward unfamiliar, government-run clinics.

Concerns about who would be liable for any injuries, real or imagined, caused by the pandemic influenza vaccine once it was distributed created further challenges. Due to the accelerated development and distribution of the vaccine—and heightened, if unsubstantiated, public concerns about the safety of the vaccines—manufacturers required vaccine purchasers to provide protection from liability claims. This was an unusual requirement. Recipient countries normally received new vaccines in less charged circumstances, after the vaccines had been in use elsewhere for years. Ultimately all governments that received the donated vaccine agreed to indemnify manufacturers, donor governments, and WHO (that is, to pay any compensation that arose out of vaccine recipients’ claims of injuries from pandemic influenza vaccines). But reaching those agreements took time.

Confirmation that donated vaccines were safe and effective and otherwise acceptable to recipient countries also took time. Donated vaccines were made by a variety of companies, in a variety of countries, governed by a variety of regulatory bodies—and routing all of the information to and from the right places turned out to be a tangle. For example, Novartis prequalified three H1N1 pandemic influenza vaccines, made in three different countries. For each of those vaccines, the national regulatory authority of the country where the vaccine was made, WHO, and the national regulatory authority of the receiving country all had to approve its distribution through the WHO donation program. There are some parallels what we are seeing now, as three of the COVID-19 vaccines that are farthest along were created in five different institutions and three different countries—and are being produced in still more locations.

As a result of all of the time needed to develop and distribute the vaccine, most recipient countries did not receive donated vaccines until after the peak of the global pandemic in November and December 2009, and some countries were still receiving their doses a year after the first pandemic influenza strain vaccine became available. In recipient countries, efforts to administer the vaccine were complicated by natural disasters or upsurges in civil disorder. Due in part to when it arrived, demand for the vaccine was often lower than initially expected, so in many countries’ vaccinations fell short of original expectations. For example, in Africa 4 percent of the population received the H1N1 pandemic influenza vaccine, instead of the 6 percent originally planned, so fewer people were protected by the vaccine than originally hoped.

Despite all of the global and country-level challenges, the WHO-led donation and distribution process for the H1N1 pandemic influenza vaccine succeeded in distributing 78 million doses of vaccine to 77 countries, many of which vaccinated high proportions of their highest-risk populations. For example, in the south and southeast Asian countries which received the vaccine, 95 percent of health care workers, 86 percent of pregnant women, 73 percent of people with underlying conditions, and 42 percent of children targeted for vaccination received the donated vaccine.

Although this marked a considerable logistical and administrative achievement, two areas stood out for improvement in subsequent global pandemic vaccine distribution efforts—including the eventual distribution of vaccines to combat COVID-19. First, since almost all of the H1N1 vaccine arrived after the pandemic’s peak, its impact in preventing death and disease was probably limited—highlighting the need for speed in global efforts to produce and distribute vaccines in response to new infectious disease pandemics. Second, the quantity of vaccine made available through the donation program was much smaller than the populations of the countries that received it, although the quantity of vaccine produced and distributed would likely have been much higher if the 2009 H1N1 virus had been more lethal or the pandemic stage of its circulation had lasted longer.

There are many differences between the COVID-19 pandemic and the H1N1 influenza pandemic, not least the fact that COVID-19 is much more deadly, especially for elderly individuals and those with lung conditions and other chronic health woes like diabetes. Some of the other key differences include the greater economic and social disruption caused by COVID-19, the unprecedented efforts to slow the spread of COVID-19 through physical distancing and other non-pharmaceutical interventions, the fact that COVID-19 is a completely new disease for which a vaccine must be developed and tested from scratch, and the impact of global efforts over the last 11 years to improve immunization programs’ capacities to deliver vaccines to all who need them. Thanks to efforts since the beginning of 2020 to mobilize and apply resources for the development and production of a COVID-19 vaccine, the total worldwide supply should be much greater than was the case for H1N1 pandemic influenza vaccine.

These differences will have a major impact on how any COVID-19 vaccine is deployed, but many of the same challenges that hampered global distribution of the H1N1 pandemic influenza vaccine will persist, and new challenges will arise. Determining liability for injuries caused by COVID-19 vaccines involves the same issues as it did for the H1N1 pandemic influenza vaccine. Storage for the new vaccine will be different: While H1N1 vaccines could stay in refrigerators, some COVID-19 vaccines must be stored at ultra-cold temperatures (negative 80 degrees Celsius), and not all areas currently have the capacity to do so.

Global distribution of COVID-19 vaccines could potentially help prevent a great deal of death and disease, but careful planning and preparation—and flexible, thorough distribution efforts—will be needed to fully capitalize on that potential.

Lee Hampton is a pediatrician and medical epidemiologist with Gavi, the Vaccine Alliance, in Geneva, Switzerland. Dr. Hampton has previously worked on vaccination program implementation and medication and vaccine safety at the U.S. Centers for Disease Control and Prevention.

This article was first published by Zócalo on 17 December 2020.