Stories from the community
Photo storiesCOVID-19Videos

At the end of the tunnel: the virus – then the vaccine – reach a remote Himalayan valley

For the people of Lahaul, the opening of a new high-altitude tunnel ends years of wintertime isolation – and opens a vital route of access for COVID-19 vaccines. 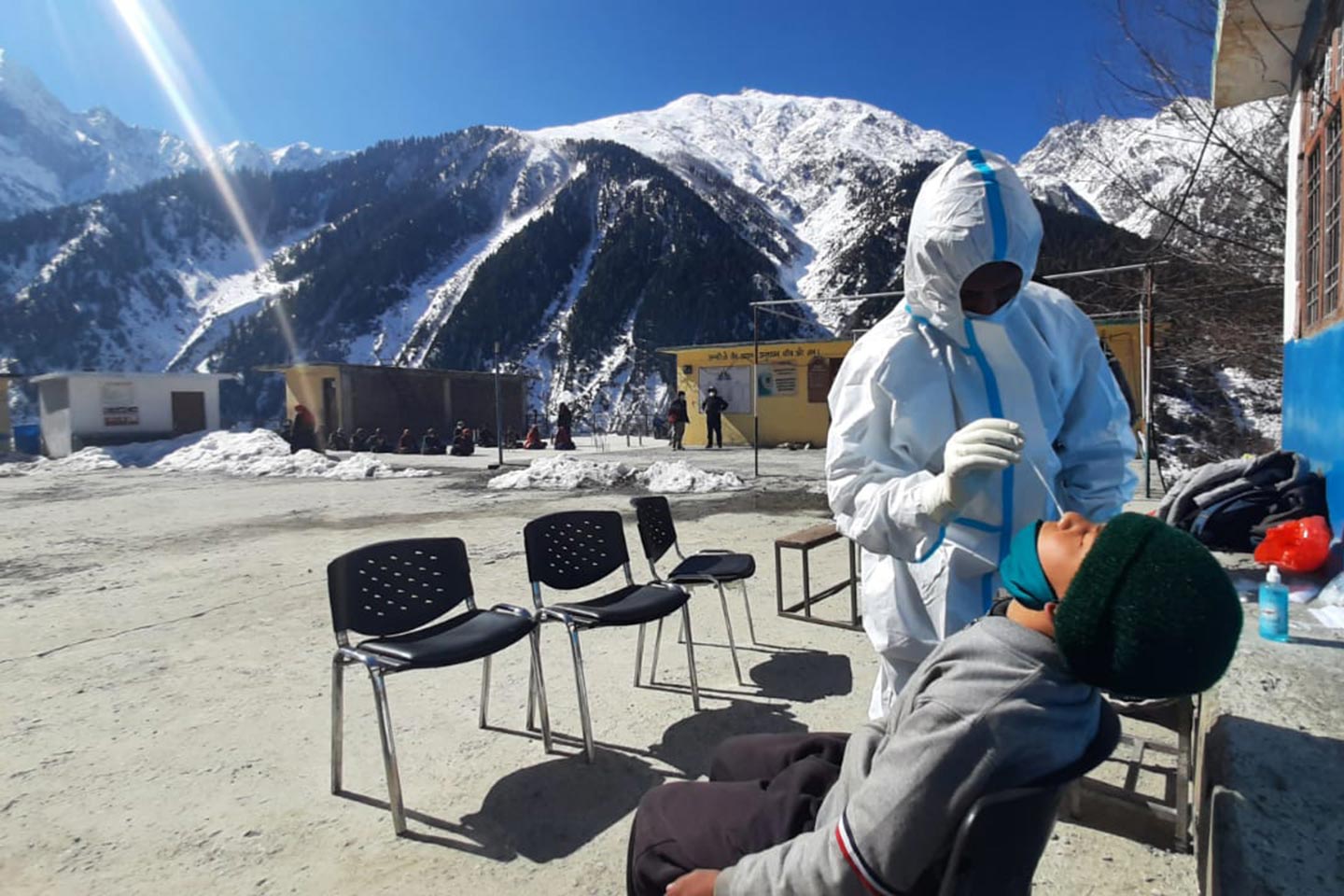 Until October 2020, the only way into high-altitude Lahaul from the Indian plains was over the Rohtang Pass, a ribbon of road that meanders between the looming peaks of the Pir Panjal range in the eastern Himalayas. Every November, when blizzards and avalanches turn it into a death-trap, the Pass closes. It reopens when the snow clears – rarely before mid-May. For Lahaulis, there have traditionally been two ways to spend winter: stock up and sit tight, marooned for months, or decamp to lower elevations.

Sonam Zangpo, a 35-year-old farmer and president of the volunteer organisation Young Drukpa Association Garsha, was at home in Keylong, Lahaul’s largest town, when the first trucks of 2020 rumbled over the snow-crusted Pass. It was late April, a good 3 weeks ahead of schedule, and a month into India’s battle to contain COVID-19. The traffic from the plains was met with abnormal ambivalence by the isolated communities of the valley. On the one hand, the first convoys brought valuable stocks of medicine and relief supplies. On the other hand, recalls Zangpo, they carried the fear of contagion.

At first, COVID-19 cases were intermittent, apparently isolated, says Zangpo, who began to travel to the villages to spread the word on coronavirus prevention measures. These were warm months, he reflects, the sowing and harvesting months, which meant the valley’s farmers were at work in their fields rather than huddling indoors, crowding the wood-fired tandoor for warmth.

Then, on October 3rd, just as the weather began to show signs of turning, the Atal Tunnel was declared open. Dreamt of for two decades by a succession of Indian governments, the tunnel is a 9.02 kilometre engineering triumph, a wormhole burrowing under the Rohtang Pass which cuts 45 kilometres out of the route that connects Lahaul to Manali, the nearest town with an intensive care unit, and spells an end, for Lahaul, to wintertime isolation. As the world’s longest tunnel above 10,000 feet, it was also a tourist draw. Tourists came. “That’s when COVID actually started spreading,” Zangpo says.

Colder weather came, too. In the valley, a season of religious gatherings began. Lahaul was about to learn a hard lesson: in an unprecedentedly connected world, risk, like safety, is a shared condition.

Dr Manoj Kumar Varma, a 27-year-old physician employed by the state of Himachal Pradesh, has been making the rounds since Spring. In Lahaul, “the rounds” mean kilometres upon kilometres of undulating high-altitude roads between ten-house villages nestled in the lee of harsh slopes, dwarfed by the snow-capped Himalayan summits above, and usually navigable by four-wheel drive – sometimes only on foot. Many of the roads cling precariously to the skirts of mountains rearing away from the ice-scalloped river, vulnerable to rockfall and avalanches, especially when herds of wild ibexes move upslope. “I keep the door-handle always in my hand, in case I need to jump,” laughs Dr. Manoj. He grew up in Shimla, a famous Himalayan hill-town. He knows snow, and cold – “but not like this.”

Dr Manoj’s job is sampling for hidden outbreaks of COVID-19, work which makes him sharply aware of the challenges of epidemic control in a harsh environment. In November, he recorded a dramatic surge. “One day, we took 220 samples, and some 125 came positive. In Thorang village, there was only one person who was not infected,” he told VaccinesWork.

Elsewhere in the valley, Sonam Zangpo’s volunteer group scrambled to pivot from prevention to emergency care. They waited out storms to ferry survival kits – hand sanitizer, gloves, pulse oximeters, basic medicines – to high-up villages at risk of snowbound isolation. They delivered food to a quarantined family left cut off by fear of infection.

By national standards, the wider district of Lahaul & Spiti’s numbers are tiny – 1,264 confirmed cases to date; 12 deaths. But in this lonely, sparsely populated landscape – some 31,500 people share the district’s rugged 13,600 km2 - survival is a matter of interdependence, and the impact of the virus was keenly felt.

“The next phase was a sort of ’psychological covid’,” observes Dr. Manoj, “People got so low. They needed counselling. People used to say to me, “sir, instead of keeping us in a quarantine center, we should do suicide. No-one can live in a jail – you feel like an animal.”

Any other winter, hope – bottled into vaccine vials - would have been stranded on the other side of the Rohtang Pass. But on 15 January, the day before India began to roll out vaccines, an insulated vaccine van shuttled through the Atal Tunnel from Keylong to Mandi. It returned the same day, carrying 1500 doses of Covishield – the vaccine produced by the Serum Institute of India. The next morning, a Keylong staff nurse named Kalpana pulled down her sleeve and received Lahaul’s first shot.

The man in charge of figuring out how to get the vaccine to Lahaul’s peripheral communities is Dr. Ranjeet Vaid. “Mainly by the mercy of God, the roads have remained open – if it had been heavier snowfall it would have been difficult,” he says, reflecting on the first phase of the vaccine campaign. When it snows the vaccine van is retired, he explains, and a four-wheel-drive is pressed into service, carrying vials in an insulated carrier lined with pouches of unfrozen tap-water - very low outdoor temperatures mean the challenge can be keeping the vaccines from freezing, rather than keeping them cold enough.

In February, the vaccine campaign reached medical staff and other front-line workers. But the fact of its availability has been felt further afield, according to Dr. Manoj. “After the vaccine came, people feel motivated that this pandemic is about to end,” he says. “That we are about to be free of this nightmare.”