The science behind COVID-19
COVID-19Pandemic preparednessExplainer

Fighting the flu: 100 years of preparing for pandemics

Although the world’s eyes are currently focused on COVID-19, a network of laboratories has been tracking the emergence and spread of a different virus for seven decades. 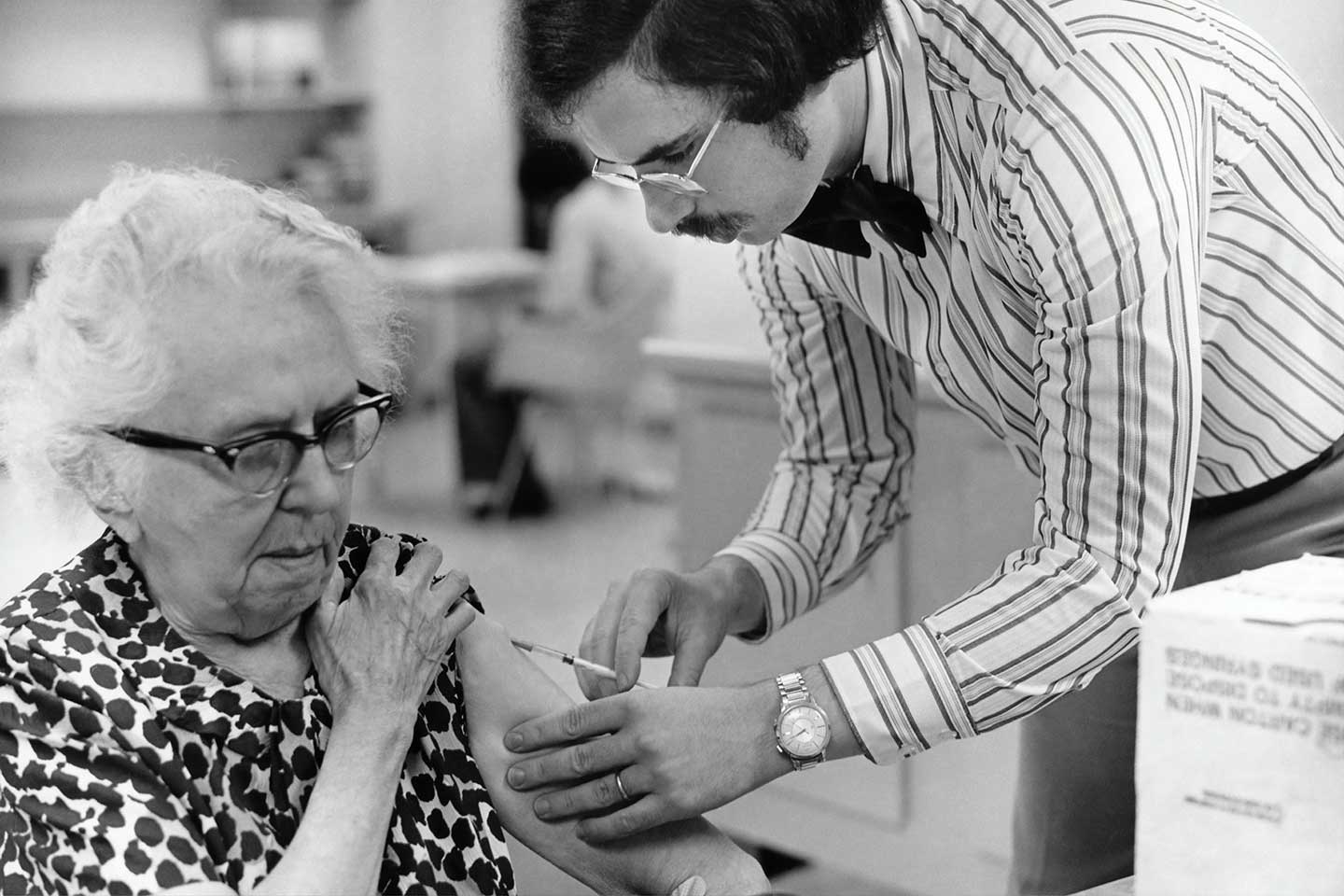 SARS-CoV-2 isn’t the first virus to sweep across the globe, triggering a pandemic. Ever since the 1918 influenza pandemic and the discovery that a virus, rather than a bacterium, was its cause, scientists have been developing ways to monitor the emergence of new pathogens, as well as strategies to stay a step ahead of them through the development of vaccines, drugs and diagnostics.

Influenza is a tricky foe. Just a few changes at critical sites of the surface protein that it uses to infect cells can result in a new strain of the virus that behaves differently to the original one. These can evade the antibodies we’ve acquired following previous infection or vaccination. Combined with its ability to reassort parts of its genome by exchanging gene segments with other influenza viruses infecting the same cell, this is why seasonal influenza vaccines must be updated each year. Occasionally, this genetic shuffling results in the emergence of a new strain of influenza, which we have no existing immunity to. When this happens, it can trigger a new pandemic.

Twice a year, the WHO convenes a meeting to recommend which viruses should be included in seasonal influenza vaccines for the northern and southern hemispheres, based on data provided by GISRS.

Influenza pandemics have been documented since the 16th century, with one of the most devastating being the “Spanish” flu pandemic of 1918–19, which by many estimates caused between 50-100 million deaths worldwide. However, it wasn’t until the early 1930s that the causative agent was identified, when scientists isolated the influenza virus from the nasal secretions of patients in England. Subsequent discoveries that it could be grown in embryonated chicken eggs, and that inactivated virus could be used to trigger a protective immune response, paved the way for the development of the first influenza vaccines, with the first large vaccine trials taking place in 1942.

Memories of Spanish flu still loomed large when the United Nations began setting up the World Health Organization (WHO) in 1947. High on its agenda was the need to develop a system for ongoing surveillance of influenza viruses, which might enable countries to be better prepared for another influenza pandemic. This was further highlighted by the discovery that the seasonal influenza vaccine used to protect US military personnel in 1947 provided no significant protection against a new strain of influenza that was triggering outbreaks in Europe.

The following year, the WHO Influenza Centre was established in London, tasked with collecting and characterising influenza viruses, developing new methods for diagnosing flu infections, and establishing a network of labs in countries where some level of influenza surveillance was already taking place. In 1952, this network became formalised as the WHO Global Influenza Surveillance Network (GISN). Initially comprising 26 laboratories – 21 in Europe and the Americas; two in Africa; and one in each of the Eastern Mediterranean, South‐East Asian, and Western Pacific Regions - its task was to monitor the evolution of influenza viruses, assess their threat, and, eventually, to advise on the formulation of seasonal influenza vaccines.

Its first test came in 1956, when GISN laboratory in Singapore announced that it had identified a strain of influenza A virus that was very different from the H1N1 viruses that had been circulating in previous years. This new H2N2 influenza subtype rapidly spread, triggering the 1957-8 Asian flu pandemic which resulted in the deaths of about 1.1 million people globally. The GISN responded by sharing the virus among its laboratories, enabling diagnostic tests and vaccines to be produced.

In the years that followed, further laboratories joined the GISN. By the early sixties, these numbered 36, which rose to 62 by the early 1970s. Today, the renamed Global Influenza Surveillance and Response System (GISRS) includes 143 frontline National Influenza Centres, which conduct regional surveillance and monitoring; six international centres of excellence on influenza; four Essential Regulatory Laboratories, which combine influenza surveillance and vaccine development; and 13 H5 Reference Laboratories supporting the early detection and confirmation of novel viruses, including those jumping from animals to humans. Although new vaccine technologies and methods for detecting circulating influenza viruses have been developed over the decades, the fundamental principles of surveillance and pandemic preparedness remain the same.

Twice a year, the WHO convenes a meeting to recommend which viruses should be included in seasonal influenza vaccines for the northern and southern hemispheres, based on data provided by GISRS. There are around 40 active influenza vaccine manufacturing facilities globally, five of which are located in lower-middle-income countries, 15 in middle-upper income countries, and 20 in high-income countries, with production occurring in all WHO regions except Africa. In 2019, we had the capacity to produce 1.48 billion doses of seasonal influenza vaccine at these facilities over a 12-month period. As nearly 85% of these vaccines are manufactured using embryonated chicken eggs, this necessitates the production of billions of eggs at specialised poultry farms each year.

In the event of another influenza pandemic, production at these manufacturing facilities could be rapidly scaled up to enable the production of a maximum 8.31 billion doses over a 12-month period. The bulk of this scale-up (80%) would occur at manufacturing facilities in high-income countries, which represent just 16% of the global population. Starting from scratch, it is estimated that the first doses of pandemic influenza vaccine could be available for distribution within 23-24 weeks (six months) of a pandemic virus’ genetic sequence being shared by WHO laboratories.

However, even this amount would be insufficient to vaccinate 70% of the global population with two doses of vaccine, as recommended under the Global Action Plan for Influenza Vaccine, and it would take twelve months of manufacturing for all of these doses to become available. Shortages of eggs, or inadequate fill and finish capacity could result in further delays.

The low capacity for pandemic vaccine manufacture in low- and middle-income countries could also result in inequitable vaccine distribution, as we’ve seen during the COVID-19 pandemic. The WHO has secured access to 11.3% of global pandemic influenza vaccine capacity, for distribution to countries in need, which could be enough to cover priority groups in those countries.

Although GISRS and the existing network of manufacturing facilities for influenza vaccine isn’t perfect, it shows that international pandemic preparedness for other diseases is a realistic goal, and capacity for pandemic influenza vaccine continues to be developed.

Not only does GISRS provide a global mechanism of surveillance, preparedness and response for new strains of influenza, it also serves as an alert system for other diseases, such as respiratory syncytial virus (RSV) - a common cause of hospitalisation and hospital deaths in young children. As COVID-19 continues to ransack the globe, there have been calls to piggy-back existing GISRS mechanisms and resources to swiftly analyse changes in the coronavirus, its spread, our immunological response to it, and the real-world effectiveness of vaccines. Although disease surveillance is nothing new, it remains an essential tool in this globalised society, where diseases can emerge and then rapidly spread.