The British artist John D’oh uses humour and wit to drive home messages about vaccines and other measures such as hand-washing and social distancing to stop the spread of COVID-19. 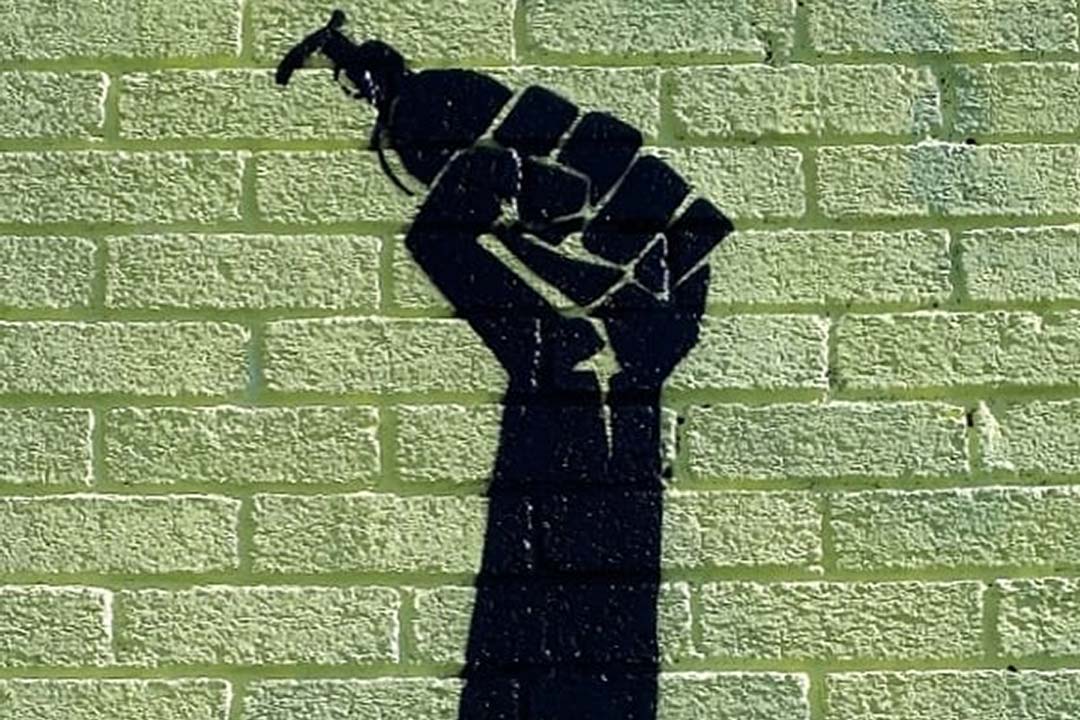 “Don’t be revolting, washing your hands.”

UK street artist John D’oh’s first piece of art on COVID-19 was less about the disease itself and more about a phenomenon raging through the Western world – an excruciating shortage of toilet paper. “People [in the UK] started to panic buy and the supermarket shelves were virtually empty of things like toilet roll and paracetamol. Although it was a humorous take on the situation it highlighted the stupidity,” he says.

Humour is a strong through-line in his art, and he uses puns to good effect. In one piece an arm is raised in a gesture of revolution that says “Don’t be revolting, wash your hands.”

The Bristol-based artist, has taken inspiration from Quentin Tarantino’s iconic film Pulp Fiction, with one piece featuring John Travolta’s character Vincent Vega saying “Injections save lives. Get your coronavirus jab.” It references a scene early in the movie in which, after Uma Thurman’s character has a heroin overdose, Vega stabs her in the heart with an adrenalin injection to bring her back to consciousness. In the caption accompanying the image on Instagram, D'Oh says that concern over the vaccine arises because “some people think they’re going to microchipped or injected with the live virus which is obviously not true.” 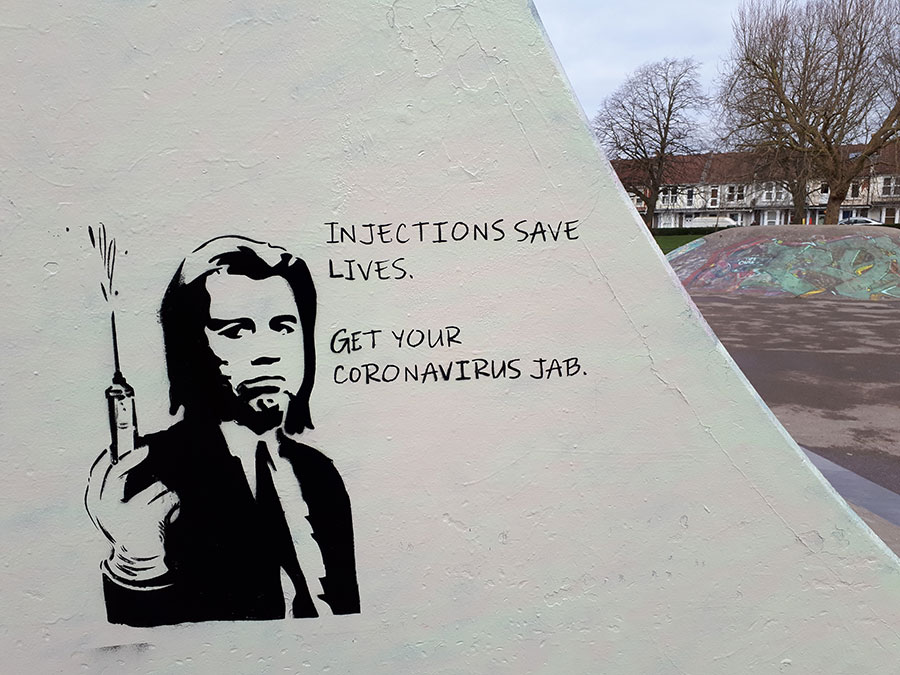 John D’oh’s work has also featured other pop culture icons such as Marilyn Monroe and Homer Simpson. “It's a way of using the relatable and well-known imagery of films, celebrity or television to highlight contemporary problems in a way that will be accessible and memorably humorous for the widest possible audience,” he says. “It is important to convey any message with humour if you want people to notice it.”

While other street artists have been blunter and more opinionated with their messaging, the Vincent Vega piece is possibly the most vocal the artist has been in terms of advocacy during the pandemic. As he says: “If I put the facts out there, then people can interpret the information how they like or choose to ignore it.”

Until the pandemic hit in early 2020, though, John D’oh’s art had been largely political satire. So what compelled him to create art on COVID-19? He describes himself as being “generally motivated by a sense of political or social injustice and the need to inform or remind the public about these important issues”. He adds: “I suppose I wanted my art to challenge the lies, deceit and cover-ups that we were all being forced to endure daily from televised government propaganda. It was a bit of light hearted humour at a time when a lot of people were scared and frightened.”

The artist has also described his art as “marmite”, referring to the strong-flavoured British condiment that is often used as short-hand for something so polarising that people either love it or hate it. He puts this down to his views being politically left-leaning and his art being quirky and different, “combining what you would see on the streets with what would normally be in an art gallery or museum.”

Health workers were – and continue – to be on the frontline in the war on COVID-19, and John D’oh pays tribute to them in an artwork that transforms the ‘S’ in NHS into Superman’s logo. He says “The NHS is still overwhelmed. Even though the coronavirus pandemic is easing slightly at the moment, we still have a massive backlog of postponed operations and people waiting for treatment,” which he attributes partly to the failure to invest in the health system, an issue many countries are facing.

Humour is a strong through-line in his art, and he uses puns to good effect. In one piece an arm is raised in a gesture of revolution that says “Don’t be revolting, wash your hands.”

John D’oh’s sense of humour extends to the pseudonym he uses, referencing both ‘John Doe’  – the name used, particularly in the USA, for a man whose identity is unknown – and the word ‘D’oh!” popularised by The Simpsons as an exclamation of stupidity. The secrecy is for two reasons. “I am in full time employment and as most employers would probably not approve of my hobby it is nice to keep work and my social life separate.” But also, he says he prefers his art to speak for itself. “I think my artwork does better without a face.”