Stories from the community
Photo storiesCOVID-19VideosPolio

The vaccinators fighting polio in Rawalpindi 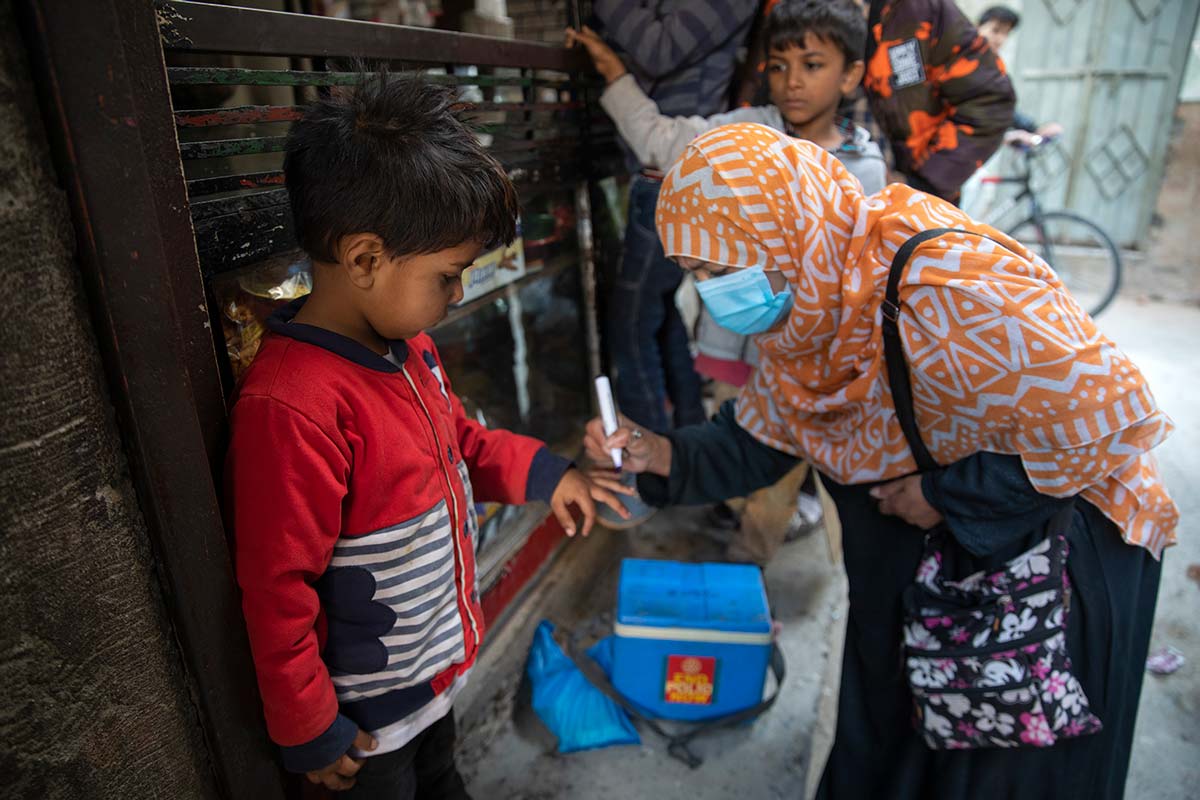 A health worker after administering polio drops to a child putting identification mark on his little finger during nationwide door to door campaign in (urban) high risk union council 8 in Fauji Colony, Rawalpindi, Pakistan. which is a predominantly Pashtoon community – Credit: Asad Zaidi

Fauji Colony has always been an enclave of unvaccinated hold-outs, and the polio workers of Union Council 8, Rawalpindi, know to expect trouble on these lanes. “Sometimes people get angry and tell us to leave as they are busy with household chores and we are disturbing them,” says Bushra Saleem. “At times people use abusive language. People close their doors in our faces.”

Like all her confederates in the struggle against polio, Saleem knows just how high the stakes are. Polio teeters on the brink of total eradication, with fewer than 200 cases of the crippling, sometimes fatal, disease recorded worldwide in 2019. But since all of those cases were concentrated in just two countries, Pakistan and Afghanistan, the fortunes of the global effort rest heavily on the shoulders of frontline health staff in high-risk zones like this one, bordering the Pakistani capital.

The last thing polio workers needed was a pandemic. COVID-19 struck Pakistan in February 2020, ushering in a lockdown that froze the national immunisation programme in its tracks. Campaigns aimed at reaching 40 million children in Pakistan1 had to be put on hold. Scientists warned that delayed polio immunisation in Pakistan could prompt a surge, and ultimately lead to “the global export of infections.” Following some small-scale campaigns in July, in August Pakistan’s polio vanguard – now masked and packing hand sanitiser – launched the first round of a massive-scale, life-saving game of catch-up.

On the grey morning of 1 December, more than a dozen vaccinators gathered in a Fauji Colony schoolyard. It was the second day of a new polio vaccination drive targeting the neighbourhood’s more than 8,000 children under five. Mohammad Imran, Medical Officer for UC-8, wanted to issue a few reminders on handling refusals. Don’t get drawn into “controversial debates,” he warned. Speak to caregivers, give them information, try to convince them – and if you can’t, alert your area in-charge. Imran, a Fauji resident with a local’s insight and a doctor’s authority, would visit persistently wary families himself, and “do my best to cover that case.”

Refusals are “our main challenge,” Imran explains. Fauji Colony is a dominantly Pakhtoon community; Pashto-speaking, culturally conservative and patriarchal. In the large families that lodge in Fauji’s tenements, women often decline even to answer the door without the supervision of their men. “Most of the households initially refuse polio drops,” Imran says. Any gap in Pakistan’s polio defence is cause for concern, but the scale of that worry is magnified by Fauji Colony’s proximity to Pirwadhai Bus Stand, a major transport hub. A disease outbreak here could travel quickly.

But in recent years, Imran and his colleagues have been making inroads, reaching previously at-risk unvaccinated children. Abid Khan, UC-8 Communications Support Officer, recalls, “four years ago, when I started working here, more than 600 refusals were being recorded.” Since then, Khan has organised briefings at the madrasa, convened education sessions for fathers and met with local groups. The outreach efforts are working, he says: during the most recent campaign, all but one hesitant family were persuaded of the importance of immunisation, and all but one child is now protected.

But each new campaign is bound to come with new challenges. The briefing over, the women shouldered their insulated vaccine carrier bags and filtered out of the schoolyard into the narrow concrete lanes. Fear of COVID-19 infection, they knew, was liable to make this already insular community more protective, and there were new faces among the vaccinators, a development liable to stoke suspicion.

On occasion, that suspicion has edged threateningly close to violence, recalls Abid Khan - angry men have been known to materialise at health workers’ thresholds after dark and promise to “teach us a lesson as we have approached their houses,” he says.

And though the women vaccinators are more likely to find a point of connection with hesitant mothers, their gender also complicates the work they do. Boys tease them in the streets, says Bushra Saleem; families consent only reluctantly to their entrance to the workforce. “We keep all challenges aside and try to do good work,” she says.

That takes courage. But Saleem, like many of her colleagues in the fight to end polio, is animated by a sense of mission. “I strongly believe that to save one man’s life means to save the life of the whole of mankind,” she says. “I feel proud of being a polio worker. I want every child to have polio drops so that this virus comes to an end in our country. I don’t want a single child to be left.”

1 Regionally, the number of missed polio vaccination opportunities stood at 80 million, according to an early-stage analysis by WHO.