The science behind COVID-19
EducationalCross-posts

We know hand dryers can circulate germs through the air. Why are they still used everywhere?

What side are you on, paper or dryer? In either case, here's the bottom line on what to do after using the toilet. 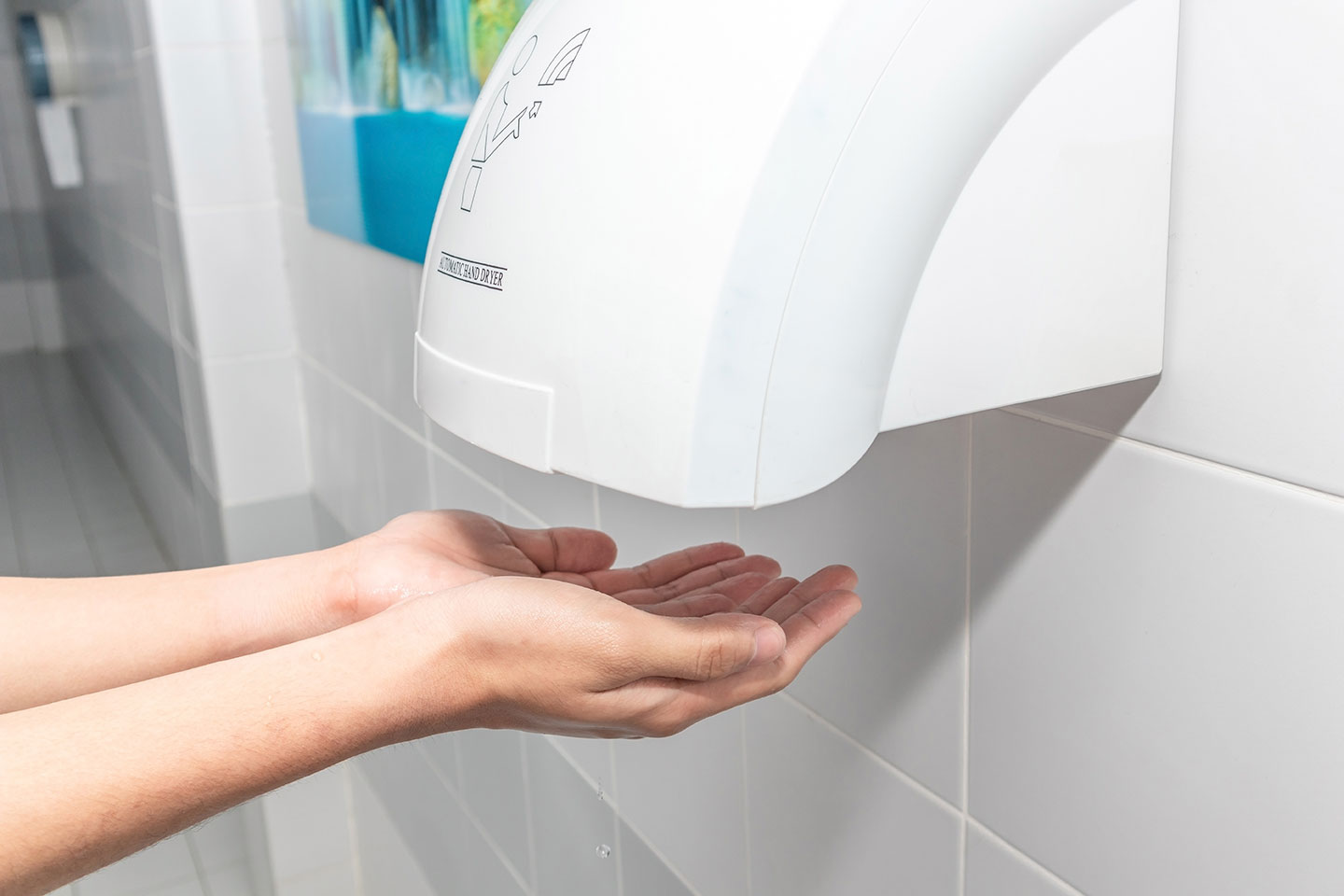 Airborne contaminants, dirty toilet seats, mould and mildew: long before the coronavirus pandemic came around, the hygiene-focused among us knew public washrooms are grimy places.

Most adults visit the bathroom around 8-10 times a day. With an average hand-drying time of 30 seconds, we can expect between 4-5 minutes of daily dryer use per person (and more for people with an overactive bladder or similar disorders).

In an attempt to facilitate the hand washing process, are hand dryers adding to the filth by blowing contaminants around? And if so, why are they still common?

The need to dry

Drying hands is an essential part of the hand washing process. Wet hands can further the spread of microbes, since moisture facilitates their transfer from the skin to other surfaces.

Compared to shaking your hands dry after a wash, using an air dryer or paper towel greatly reduces the number of surface bacteria that remain.

It’s worth remembering hand dryers don’t create microbes and there’s usually only minimal bacteria on their nozzles, too. In many cases air dryers can even be fitted with filters that help clean and remove contaminants from the air.

Nonetheless, while dryers themselves aren’t necessarily unclean, their forced air can help circulate bacteria around the space. This is why the main focus should be on preventing bacteria from surfaces ever becoming aerosolised (entering the air) in the first place.

If a toilet’s lid is left open when it’s flushed, a fine aerosolised mist of microbes enters the air. And this cloud of faecal matter can spread over an area of up to six square metres.

Research has shown even after flushing many times, a toilet can continue to emit contaminants into the air. In other words, a person infected with a virus could be spreading these germs for several hours after visiting the bathroom.

Public washrooms can therefore act as reservoirs for especially nasty bacteria, such as those which are resistant to antibiotics.

So are paper towels the solution?

Paper towels remove water by absorption and take contaminants with them when they’re binned. However, they can cause plumbing problems if flushed down the toilet, which require time and money to fix.

Additionally, paper towels need to be continuously purchased, restocked and disposed of as waste — all of which leads to increased costs. In a worst-case scenario towels may run out, prompting people to exit without drying their hands at all.

Granted, in a hospital setting a dryer’s forced air may move microbes onto items handled by health professionals and patients, such as phones or stethoscopes. So paper towels may be a more suitable option here.

But they still don’t provide an entirely sterile environment and can be contaminated by microbes circulating in the area.

Although hand dryers do produce carbon emissions, studies have shown warm air dryers (which rely on evaporation) generate up to 70% more emissions than newer, fast jet dryers (which force out a rush of cold air).

Using recycled paper towels doesn’t seem to help much, either. This is because they can’t be recycled further, due to chemicals added to increase their absorptive properties as well as the overall energy required to manufacture them.

In the US, around six million tonnes of paper towels end up in landfill each year.

But there isn’t a clear winner in practise. A recent critical review concluded there wasn’t enough research weighing up both options and that until more robust studies were conducted, evidence-based public policy recommendations couldn’t be made.

This echoes both the World Health Organisation’s and Centre for Disease Control’s hesitance to offer recommendations for whether drying hands with air dryers is more or less effective than using paper towels.

Tips for a healthy bathroom regimen

Health education on this front is important. Simple recommendations include:

In areas where infection control and prevention are paramount, such as hospitals or food production areas, measures such as increased airflow and air filters can also help.

Managers of public washrooms have much to consider when deciding which method of hand drying to provide. In some scenarios, hand dryers do present as a better option, which is why we continue to see them in public washrooms.

Regardless of what option you choose, don’t forget drying is an essential part of the hand-washing process. Both air dryers and paper towels are, by a long way, better than using nothing at all.

Bond University provides funding as a member of The Conversation AU.