The science behind COVID-19
EducationalCOVID-19ExplainerCross-posts

A biologist explains what proteins do in viruses, how they interact with human cells, how the vaccine delivers mRNA into the cell and how antibodies protect us. 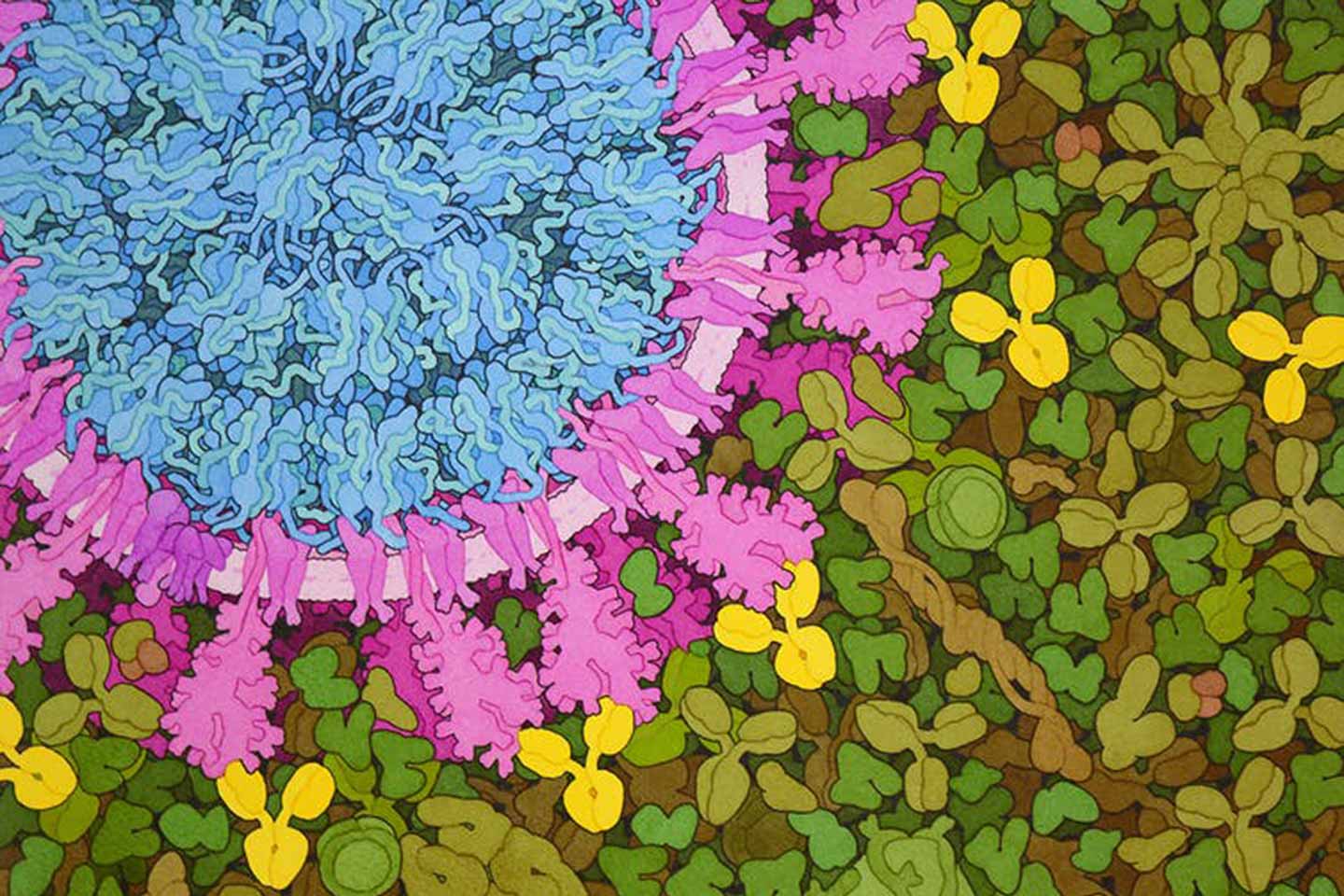 Neutralizing antibodies attach to the tips of the spike proteins of the SARS CoV-2 virus. David Goodsell/ProteinDatabase, CC BY-SA

Editor’s note: In this interview, Nathan Ahlgren, assistant professor of biology at Clark University, uses 3D-printed models to explain what proteins do in viruses, how they interact with human cells, how the vaccine delivers mRNA into the cell, and how antibodies protect us. This follows an earlier article in which he explained what proteins are and the wide range of functions they have in the body.

Nathan Ahlgren explains what role proteins play in a virus and how the spike protein works.

All of life has proteins. So human cells have proteins, and the same is true for viruses, even though they’re very different from the cells in our body. A virus is made up of two main things – a protein shell and genetic material.

The image above shows a 3D-printed model I made of proteins from the human papillomavirus. Each one of the colored pieces is made up of five copies of a single protein, and together they make an icosahedral shell. Inside, I’ve represented the genetic material here as a red strand. And that’s essentially what a virus’s structure is made up of. In this case, the proteins’ function is to make a protective shell around the virus. Some viruses, including SARS-CoV2, also have a plasma membrane or lipid membrane around them.

What is the function of the spike protein?

The spike protein has two functions - recognizing and attaching to the cell, and then allowing the virus’s genetic material to get into the cell by fusing with the cell membrane. The tip of the spike protein is going to recognize another protein that’s on a human cell’s surface. So if my arm in the image above is the cell surface, it’s going to connect to a protein there. The protein that it recognizes in human cells is called ACE-2. Once it recognizes an ACE-2 protein, there’s a complicated process in which the spike protein actually unfolds a long, thin structure to stick into the plasma membrane of the cell and fuse the plasma membranes of the virus and the cell.

How do mRNA vaccines interfere in this process?

The vaccines take the mRNA sequence for the spike protein, put it in a special package and deliver that into your human cells. Now your cells have the instructions to make the spike protein, so they’re going to make some. That protein is going to end up on the surface of your cell. That’s when the immune system takes action. Your body detects this protein, recognizes that it is foreign to the body and tries to seek out and destroy that protein.

They way the vaccines get mRNA into the cell is in some ways similar to the way the viruses do it. It’s a simple package with genetic material inside.

What do antibodies do?

Antibodies are another kind of protein. They take a Y-like shape, and their job is to recognize such intruders as bacteria and viruses in your body.

How do they do that? The tips of the Y are slightly different from antibody to antibody. Your body makes billions of different antibodies, which mostly differ at the tips. The tip’s shape, the molecular composition and charge has to be exactly right to fit on the end of the spike protein and block it. Once the tip of the spike protein is blocked, then it cannot fit into the ACE-2 receptor anymore. So this is what is called a “neutralizing antibody.”

The other thing antibodies can do is, once they’re attached to the spike protein, they can act like a flag. And then other immune cells can recognize that flag and say “OK, I gotta go eat this thing. This is a thing that’s bad for the body.”

How do all these proteins find their targets?

They are all kind of floating around and bumping into each other, which is maybe a little concerning, that the fate of our health depends on these molecules floating around and finding each other. But you’ve got a lot of antibodies, and if you’re infected with a lot of viruses, they’ll float around and meet just the right surface and get attached to their target.

Clark University provides funding as a member of The Conversation US.