The country moved quickly to contain the virus, but its health system struggled to look after those who got sick.

The country moved quickly to contain the virus, but its health system struggled to look after those who got sick.

With 200,000 COVID deaths in a population of less than 33 million, the impact of the pandemic in Peru has been particularly devastating: the country has the highest COVID death rate per head of population worldwide. It’s also estimated to have one of the world’s worst rates of children being orphaned or bereft of their caregivers due to COVID.

Yet, compared to many other countries, on paper Peru was relatively well-placed to handle COVID. It is an upper-middle-income country – and before COVID had been performing well economically. Life expectancy had been rising and poverty falling, and it had been making good progress on improving public health, with access to healthcare increasing.

So how has it still ended up in such a bad situation?

Not built for lockdown

On March 15 2020, with 28 confirmed cases and no reported deaths, the Peruvian government declared a nationwide state of emergency. This quickly introduced a series of strong control measures, which included closing borders, restricting freedom of movement nationwide and banning crowds from gathering. Schools, universities and churches were closed. In general, all non-essential activities or services were restricted, including non-emergency primary healthcare.

But unfortunately, the early adoption of these measures wasn’t enough to lessen the impact of the pandemic. Cases immediately started to climb.

The government had acknowledged that adopting a strict lockdown would be difficult. Peru has a large informal workforce and a fairly limited social security system – meaning that staying at home, off work, would be hard for many. So the government announced a series of policies, such as cash transfers, to try to protect people’s livelihoods while asking them to stay at home.

But the state didn’t have the capacity to deliver cash and food in a way that prevented citizens from needing to venture out. People still had to go out and form long queues in banks to receive their cash transfers. Many also still needed to travel daily to food markets. Both became potential infection hotspots.

Rising cases then revealed structural weaknesses in the Peruvian health system. Despite recent economic growth and general improvements in public health, the overall health infrastructure of the country was still poor prior to the pandemic.

In January 2020, according to the ministry of health, 78% of health and medical centres had inadequate capacity to provide services, which included having obsolete, inoperative or insufficient equipment. By the beginning of 2021, this had risen to 97% of primary services.

Similarly, before the pandemic Peru had 29 intensive care beds per million people, below other countries in the region such as Brazil (206), Colombia (105), Chile (73) and Ecuador (69). Staffing levels were also insufficient to allow many health facilities to function properly. This all hampered Peru’s ability to effectively respond to a crisis situation.

The health system is also highly fragmented, which has made coordinating the COVID response across the country challenging, jeopardising its effectiveness at protecting the most vulnerable. And on top of this, there are also persistent inequalities within the system, with access to healthcare often determined by wealth, gender, ethnicity and geography.

For instance, the indigenous peoples in the Peruvian Amazon region are among those who have suffered most from the epidemic. Their lack of access to health services, water and sanitation, as well as their high rates of poverty and child malnutrition, placed these ethnic groups in a situation of greater vulnerability.

Despite Peru making some progress towards providing free universal healthcare, it’s been estimated that between 10% and 20% of the population still don’t have access to any health coverage at all. Even those who can access care through public health facilities have to pay some fees – and before the pandemic, this out-of-pocket spending on healthcare was increasing.

The pandemic then exposed how drastically costly this could end up being. And for those without private insurance or access to good state-provided care, the costs could be even higher still, with medicines and care charged at vastly inflated rates in some private hospitals. For some the costs will have stopped them seeking care altogether. Income is another barrier to accessing care.

The problem is that there is little regulation of the health sector in Peru. The same private company can end up providing health insurance, health services, and medicines and medical supplies without any price control mechanism.

The private sector has had a negative influence elsewhere too. Peru also suffered a shortage of medical oxygen, which was exacerbated during the early stages of the pandemic by the country’s history of manufacturing oxygen at a higher concentration than the international standard (meaning there was less to go around).

Peru’s competition authority concluded nearly a decade ago that there was no good scientific reason for doing this – and that the norm was adopted simply to benefit the interests of several private oxygen manufacturers in the country. Only during the country’s oxygen crisis was the convention overturned.

As vaccination levels have increased from mid-2021 onwards, cases and deaths in Peru have fallen and stabilised at a low level. However, the crisis has unveiled the susceptibility of the country’s health system, and in particular the potentially negative influence of the private sector. The capacity and accessibility of Peru’s health system need to be much better – otherwise disasters like this could happen again.

María José Romero is affiliated with the European Network on Debt and Development, Eurodad, which is a non-profit organisation working in the field of development finance. This article does not represent the views of Eurodad.

SOAS, University of London provides funding as a member of The Conversation UK.

The hunt for coronavirus variants: how the new one was found and what we know so far

Omicron: why the WHO designated it a variant of concern 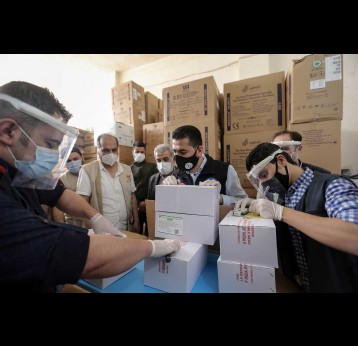