How well do first and second vaccine doses work against Covid-19?

Is it risky or wise to delay the second dose of Covid-19 vaccine? Critics warned against the UK government policy of leaving a longer gap between doses of the Pfizer-BioNTech and Oxford-AstraZeneca vaccines. Now we have more data, so what do we actually know? 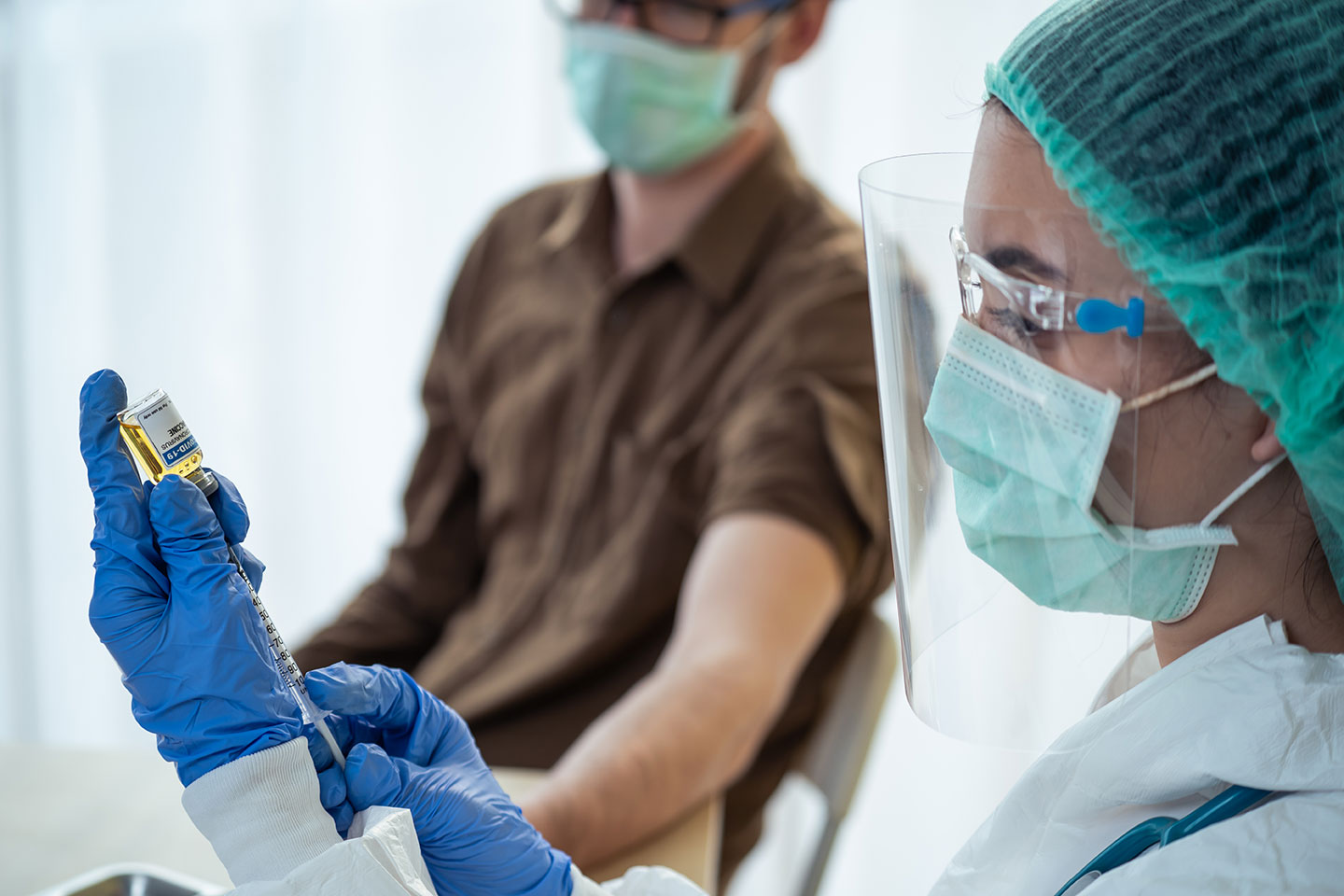 How long does it take to build immunity after getting a Covid-19 vaccine?

Immunity takes a while to build up. If you had your first Covid-19 vaccine dose yesterday, then you are not protected yet. Your body needs to spend time responding to the vaccination before it can produce an effective immune response.

It seems that some protection starts to appear about 2 weeks after the first dose, and then this increases over time. But after a longer time – we aren’t yet sure how long – this protection is likely to start to fade again. So you will need a second booster dose to make sure your immune system can consolidate this protection for the long term. The benefits of the second dose start to appear after about 1 to 2 weeks.

And there are different degrees of protection: against death, against needing to go to hospital, against getting ill, and against getting infected at all. A round-up of evidence from around the world, by Public Health England, finds that one dose of the Pfizer-BioNTech or Oxford-AstraZeneca vaccines is fairly good at preventing infection and illness, and better at preventing hospitalisation or death. After a second dose, protection increases further, although at the moment there’s more evidence on second doses of Pfizer-BioNTech than Oxford-AstraZeneca.

How long after the first dose should you have the second dose?

The UK introduced its policy of leaving a 12-week gap between Covid-19 vaccine doses at the end of December 2020. This is at the top end of the range recommended by the makers of the Oxford-AstraZeneca vaccine (4 to 12 weeks) but is much longer than recommended for the Pfizer-BioNTech vaccine (3 weeks).

For the new Covid-19 vaccines, we don’t yet know what the ideal gap is – it takes time to test this. But the evidence is positive about longer delay.

For the Oxford-AstraZeneca vaccine, data from clinical trials suggests that a single dose gives good protection against illness for more than 12 weeks, and that the booster effect of the second dose is stronger when the gap between doses is longer.

For the Pfizer-BioNTech vaccine, we have less specific evidence on this from clinical trials. But real-world observation is showing that first doses maintain their strong benefits for longer than the initial 3 weeks. Public Health England monitors illness rates among adults who have and haven’t been vaccinated, and it reports that protection from the first dose of Pfizer-BioNTech grows over time, holding up very well 8-9 weeks after the jab. But there are some signs that this protection may drop a little after 10 weeks. For Oxford-AstraZeneca, protection from the first dose stays strong with no sign of decline.

Can you still get ill with Covid-19 after vaccination?

The new vaccines are very good, but they’re not perfect, and no vaccine works perfectly for everybody. The highest estimates of their peak efficacy are above 90%, but not quite 100%. After you’re vaccinated, it is possible that you could catch Covid-19. But if you do get ill, it’s much less likely to be severe and you’re much more likely to recover without needing to be hospitalised.

Remember, immunity takes weeks to properly develop after getting your first dose, so during that time you may still be at some risk.

There’s also the danger of new coronavirus variants emerging that might be able to avoid the vaccines’ effects. For example, people have been concerned about the delta variant, first identified in India but now spreading in many countries. Public Health England has looked at how effective the Pfizer-BioNTech and Oxford-AstraZeneca vaccines are against this variant. So far, it seems that the first dose of either vaccine is less likely to stop the variant from causing illness – but protection from the second dose is much higher.

Scientists are already looking at ways to adjust the vaccines to cope with such variants, so in the future we might need occasional booster jabs to keep us protected. We might even need boosters at some point regardless of any variants, as it’s possible that the protection might fade over longer periods. Long-term monitoring of vaccine effectiveness will be needed to help us understand this.

Do the vaccines prevent you from spreading coronavirus?

Why did the UK decide to extend the gap between doses?

UK cases of Covid-19 were surging last December, along with hospitalisations and deaths, and there was a risk that the NHS could be overwhelmed. In light of this, health authorities decided that it would be better to give the protection of a first dose to as many people as possible, as fast as possible. That meant delaying second doses, on the grounds that they would add only limited extra protection to people who already had significant immunity from their first dose.

This policy was recommended by the independent experts on the Joint Committee on Vaccination and Immunisation – an independent expert group that advises the UK health departments – and the UK’s Chief Medical Officers agreed.

Ideally, researchers would run a set of clinical trials to compare different dosing schedules and then authorities would make policy based on plenty of solid data. But in the face of a public health emergency, waiting would have cost lives. The decision was based on limited data from the vaccine trials in 2020, coupled with expert judgement about how vaccines generally work.

Evidence that has appeared since then is, so far, vindicating that decision.

In mid-May, in response to the spread of the delta variant, the UK slightly changed its policy again. It is now recommending that people in the highest-risk groups should get their second doses sooner, after a gap of about 8 weeks. The government thinks that the short-term extra protection from these second doses may be important if case numbers increase sharply.

Which other countries are delaying second doses?

Canada has gone even further, changing official guidance to support a 4-month gap.

What about 'mixing and matching'?

There is no evidence yet on whether switching vaccines between doses can make any difference, but some immunisation programmes for other diseases do this because the results are better. There are already trials underway to test whether this might work for the Covid-19 vaccines.

In the meantime, the UK government says that people should get a second dose of the same vaccine as their first dose, as do other governments around the world. However, if supplies of that vaccine are unavailable, or information has been lost on which the first dose was, the UK guidance is that it may be better to give a dose of whichever is available rather than no second dose at all.

As the vaccine rollout continues, we need to keep reducing the spread of the virus by following guidelines on wearing masks, washing hands and avoiding face-to-face contact wherever possible. This applies even after receiving the first dose, because immunity takes time to build up.

Scientists will need to keep monitoring the appearance of new variants across the world, and devise ways to modify the vaccines if needed.

Finally, it is crucial to make sure vaccination is rolled out speedily and equitably across the globe, not just in the UK and other rich countries. The more people worldwide who remain exposed to the virus, the more opportunity it will have to mutate into a more harmful form. In a pandemic like this, the interests of any one country merge together into the interests of the whole human race.

This article was originally published by Wellcome under Creative Commons Attribution 2.0 UK on 11 June 2021. 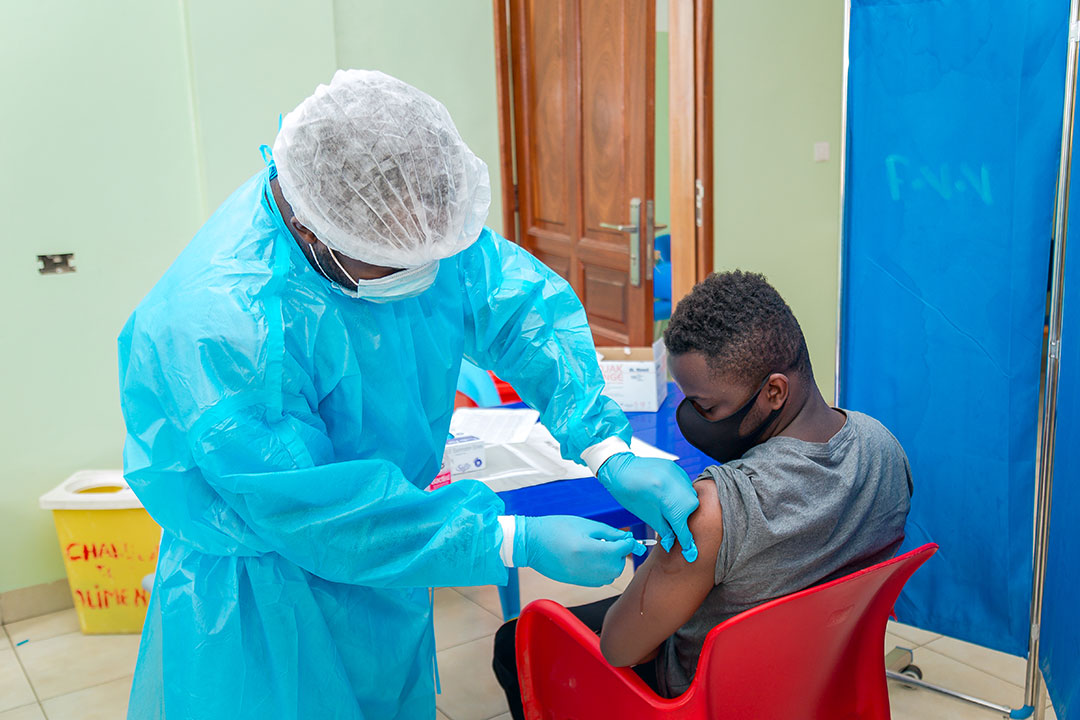 How can the world adapt to COVID-19 in the long term?

How well do first and second vaccine doses work against Covid-19? 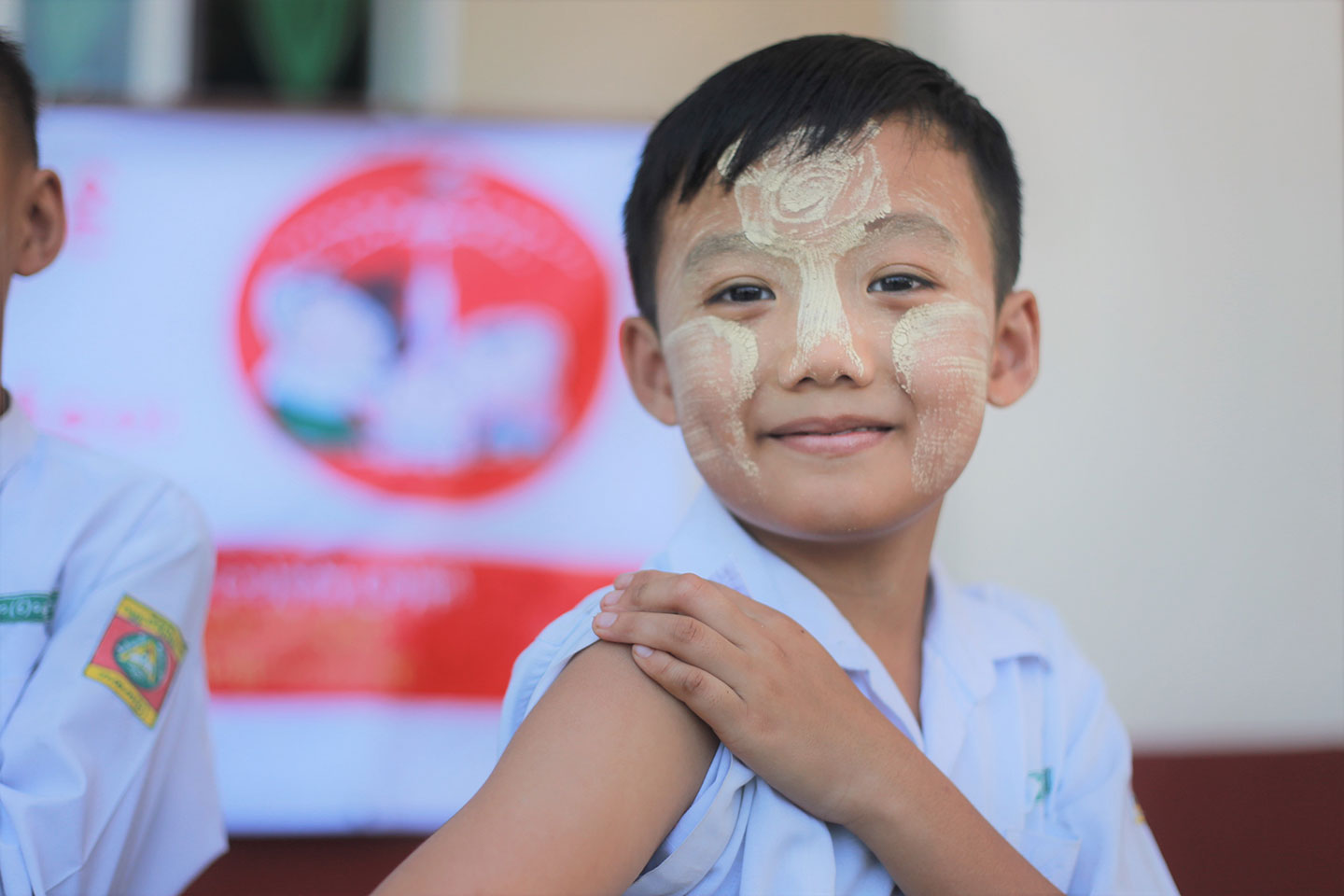 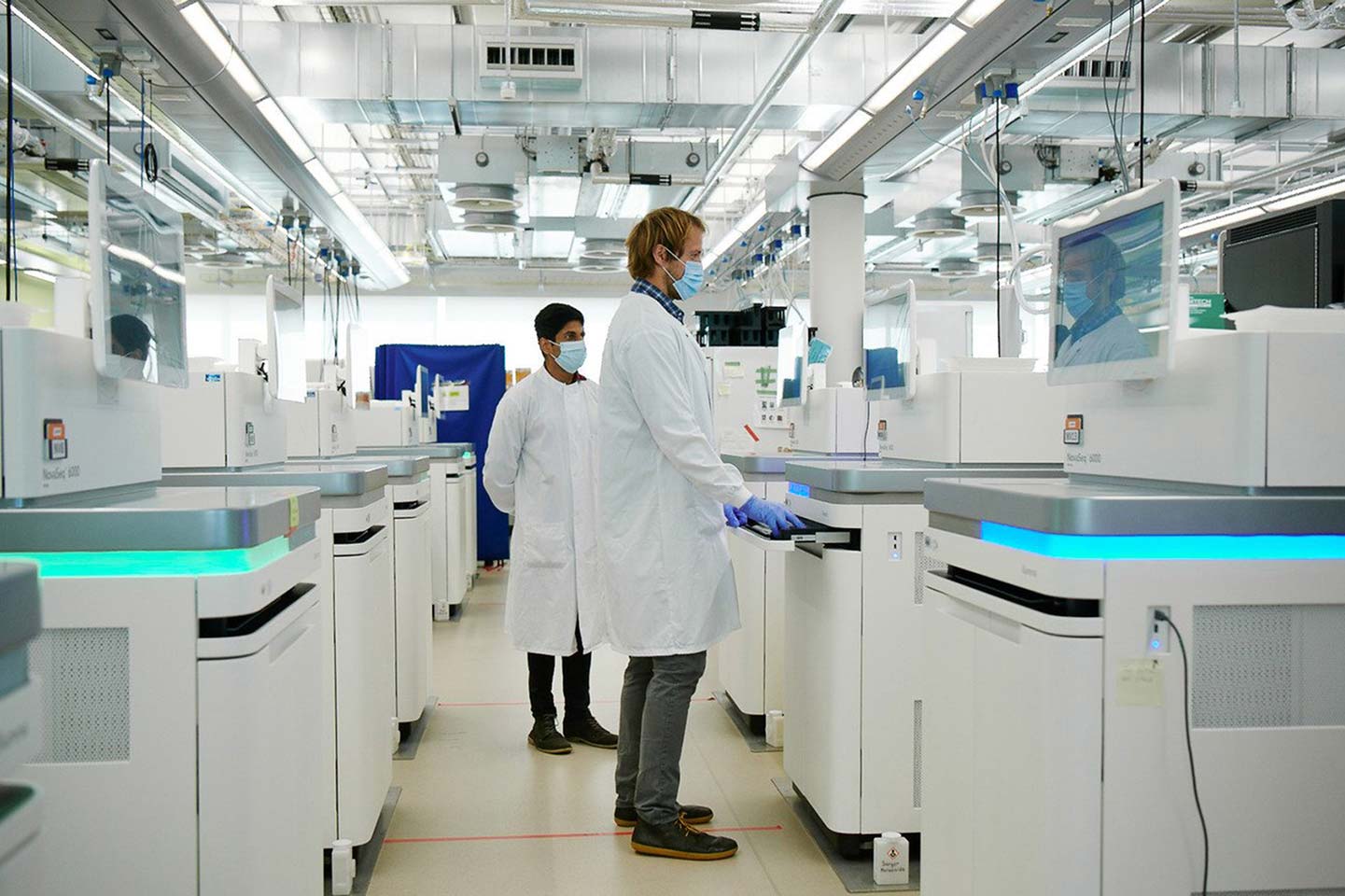 An expert explains how to track coronavirus variants