News from the lab
Cross-postsRSVResearch summary

Respiratory syncytial virus (RSV) is common cause of infections such as pneumonia. Most cases and deaths in young children occur in lower-income countries. Passive immunisation campaign urged for babies under six months. 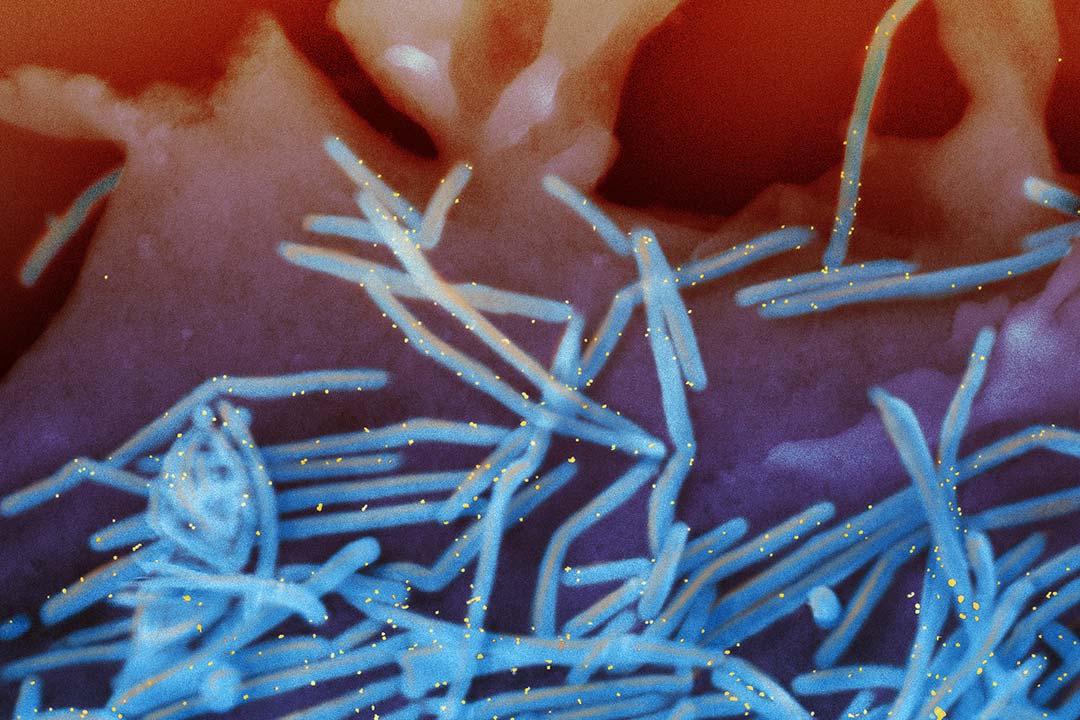 An electron micrograph of human respiratory syncytial virus (RSV) (colourised blue). Experts say RSV cases are likely to be on the rise as masks and lockdowns have led to a reduction in natural immunity. Copyright: National Institute of Allergy and Infectious Diseases, National Institutes of Health, (CC BY-NC 2.0).

As COVID-19 and monkeypox hog the limelight, new research sheds light on the devastating potential of another viral disease—the respiratory syncytial virus (RSV)—that  kills more than 100,000 children a year worldwide.

RSV is the most common cause of acute lower respiratory tract infections in infants and young children around the globe, but the burden of disease is disproportionately high in developing countries, according to the Respiratory Syncytial Virus Consortium in Europe.

Lower respiratory infections affect the airways below the larynx or voice box, including the windpipe, or trachea, and tiny air sacs in the lungs. They include acute bronchitis, bronchiolitis and pneumonia.

“In LMICs, the burden is likely to be even more due to overcrowding and poverty, hence mandatory passive immunisation plays a major role in the prevention of severe RSV disease.”

Figures published in The Lancet reveal that more than 95 per cent of incidents of acute lower respiratory infection associated with RSV and more than 97 per cent of deaths attributable to RSV, among children under five, occur in low- and middle-income countries (LMICs).

“RSV is an important cause of death due to lower respiratory tract infections in children, especially infants,” says Anand Krishnan, an author of the study and professor at the Centre for Community Medicine at the New Delhi-based All India Institute of Medical Sciences.

“Despite this, there is very little routine testing for RSV in clinical settings even in tertiary [specialised health care] facilities, primarily as no specific treatment is available.”

The researchers from countries including India, South Africa, UK and USA point out that RSV plays a significant part in the suffering and death of young children across the world—particularly in the initial six months of life and in the LMICs.

The researchers analysed 481 studies and estimated that in 2019, among under-fives, there were 33 million RSV-associated acute lower respiratory infection episodes, and 101,400 deaths attributable to RSV. For infants aged 0 to six months, the estimated figures were 6.6 million and 45,700, respectively.

There is no specific RSV vaccine but the researchers urge the implementation of passive immunisation programmes to combat the disease. Instead of a vaccine, which provides active immunity, in passive immunisation, a person receives antibodies—proteins produced in the body in response to a foreign invader or antigen.

The researchers recommend that passive immunisation programmes to provide protection against RSV in the initial six months of life could significantly reduce the burden of RSV. However, they say more data around this approach is needed.

Researchers were also surprised to find that hospital admissions in babies aged up to six months was “consistently lower” in LMICs than in high-income countries, “reflecting the fact that access and availability to hospital care is still limited in LMICs”, they said.

Experts say RSV cases are likely to be on the rise as masks and lockdowns have led to a reduction in natural immunity against this and other common viruses.

Development of a vaccine had been slow after an unsuccessful one in the 1960s resulted in lung inflammation during the first natural RSV infection after vaccination, proving fatal in two cases, according to the WHO.

However, new understanding of the virus in recent years has led to multiple vaccine candidates undergoing development, some of which may receive regulatory approval in the near future, the UN health body says.

“RSV-targeted interventions are likely to be an important component of infant mortality rate reduction strategies globally, especially for LMICs,” says Krishnan. “It is important that the manufacturers as well as global health agencies keep that in mind as they make decisions on access and price of upcoming products.”

He adds that, as newer biomedical interventions are in the pipeline, it is important for governments to be ready to make appropriate evidence-based decisions for their deployment in these countries.

“In LMICs, the burden is likely to be even more due to overcrowding and poverty, hence mandatory passive immunisation plays a major role in the prevention of severe RSV disease,” she told SciDev.Net.