The next pandemic: Ebola?

Ebola has so far only affected African countries, and occasional cases outside of the continent have been rapidly contained. But the virus could mutate to spread more easily between people, making it more of a pandemic threat. 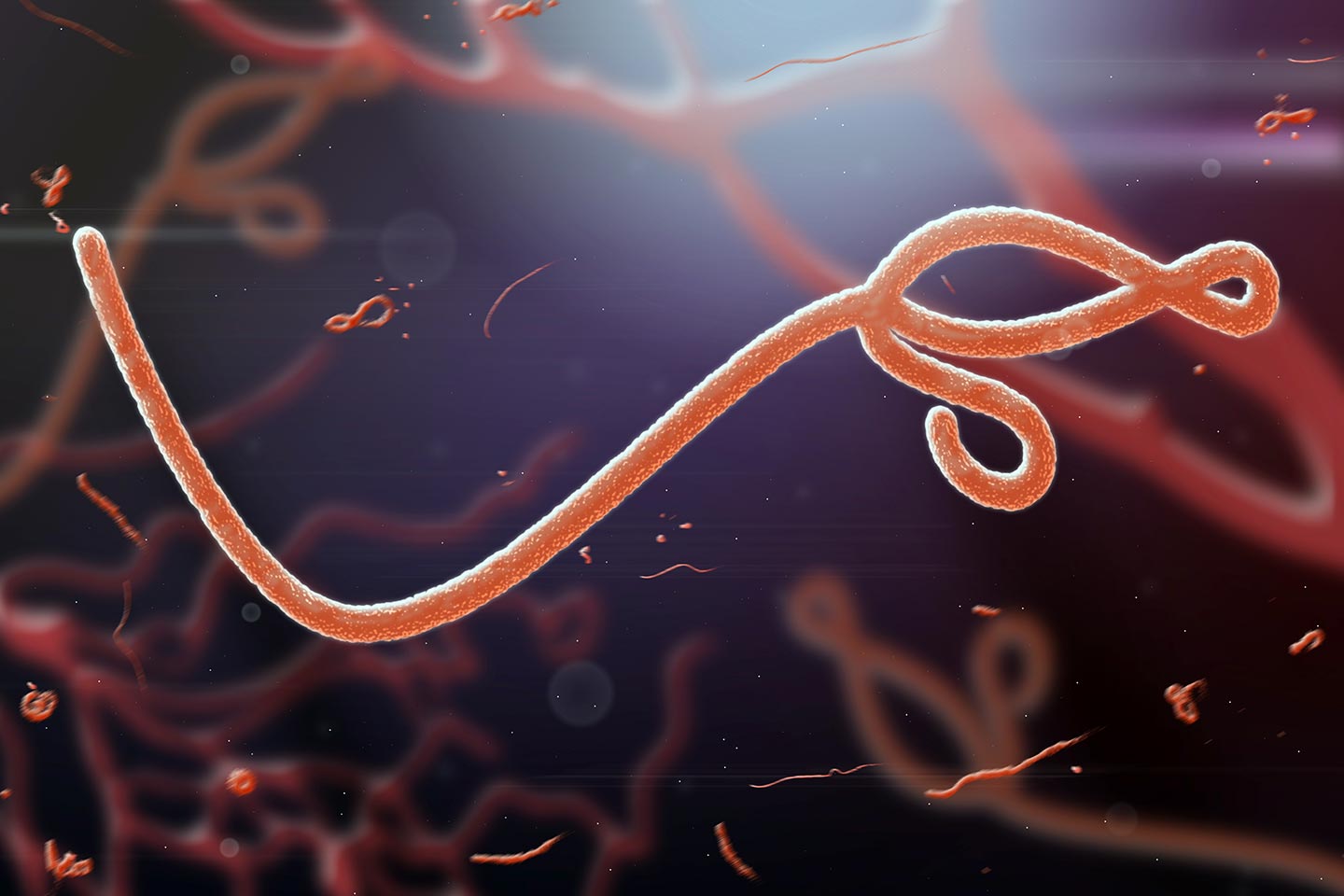 Microscopic view of the Ebola virus

Ebola has so far only affected African countries and occasional cases outside of the continent have been rapidly contained. But the virus could mutate to spread more easily between people, making it more of a pandemic threat.

A town square dedicated to Isaac Newton in Reston, Virginia seems like an unlikely place for an Ebola outbreak, but that’s exactly what happened around 30 years ago. In 1989, the Reston Primate Quarantine Unit looked after monkeys imported for scientific research and educational purposes. When dozens of macaques brought in from the Philippines suddenly died, testing seemed to show that they had died from the Zaire strain of the Ebola virus that can kill as many as nine out of ten people it infects. With homes and shopping centres very close to the ‘monkey house’, the army was called in to contain what had the potential to be a devastating public health outbreak. But one never came. Monkey handlers appeared to develop antibodies and did not get sick. That’s when scientists realised they had discovered a new strain of Ebola that they called Reston, that causes disease in animals but not people.

Since the monkeys didn’t have contact with each other, some scientists believe the virus could be airborne, though others suggest that the virus could have spread through the animals throwing faeces or handlers using the same gloves and equipment on several animals. The prospect of Ebola becoming airborne is contentious – senior infectious disease specialists say it’s a likelihood, whereas others argue that, even with frequent mutations, no virus that affects humans has ever changed its mode of transmission. What may be more likely is that, given the pattern of previous Ebola infections, in which people have infected others that they have not had close physical contact with, Ebola is sometimes spread by respiratory droplets even if this is not the main method of transmission.

Where is it circulating? Ebola virus was first identified in 1976 near the Ebola River in what is now the Democratic Republic of the Congo (DRC). Since then there have been outbreaks in several African countries; the biggest outbreak was in 2014-2016 in three West African countries – Guinea, Liberia and Sierra Leone. In the five years since there have been several outbreaks in DRC, with a major outbreak in 2018 – 2020. In February 2021, Guinea had its first outbreak in five years, which is of great concern given the porous borders with Liberia and Sierra Leone. Even more worrying is that genetic sequencing suggests the current outbreak in Guinea was triggered by someone infected 5-7 years ago during the 2014 -2016 West African outbreak, whose body has been harbouring the virus.

Pandemic threat: There are four Ebola viruses that cause disease in people, all of which are endemic to Africa. While these are mainly spread through a direct exchange of bodily fluids, it could be spread through respiratory droplets, such as when people produce bodily secretions such as sneezes or coughs (or as often happens with Ebola, vomit). Scientists have also wondered if the virus could in some cases be transmitted through smaller, aerosolised particles, although this does not seem likely to be a major mode of transmission. Since Ebola is such a ferocious killer and it doesn’t spread very easily, it often kills people before they have had a chance to spread the virus. However, if the virus mutates in ways that allow it to spread via respiratory droplets, as COVID-19 does, that would increase the potential for it to spread more easily and become a pandemic threat.

Reston so far only affects animals, but it is so similar to the other four Ebola viruses, there is a concern that it could mutate to become pathogenic in humans and then spread easily around the world through imported livestock or other animal production.

How is it spread? Like many zoonotic viruses, Ebola’s natural hosts are fruit bats of the Pteropodidae family. But the virus can spread to people through porcupines and other non-human primates too. It spreads between people through direct contact with blood, secretions, organs or other bodily fluids of infected people, and with surfaces and materials, such as bedding or clothing, contaminated with these fluids.

Symptoms: The main symptoms are fever, severe headaches and muscle or joint pain, fatigue, and gastrointestinal symptoms, such as diarrhoea and vomiting.

Diagnosis: Polymerase chain reaction (PCR) testing is most frequently used to diagnose Ebola virus because of its ability to detect low levels of virus.

There are two licensed Ebola vaccines. As well as being licensed by the European Medicines Agency (EMA) and the US Food and Drug Administration (FDA), Ervebo has now received regulatory approval from Burundi, Central African Republic, the Democratic Republic of the Congo, Ghana, Guinea, Rwanda, Uganda and Zambia, and is recommended by the WHO Strategic Advisory Group of Experts on Immunization (SAGE). In May 2020, the EMA licensed a second vaccine delivered in two components, the first called Zabdeno (Ad26.ZEBOV) and the second Mvabea (MVA-BN-Filo); this vaccine works as a prophylactic and is not suitable for an outbreak response where immediate protection is necessary. In January this year, Gavi announced funding of a global stockpile, initially of the Ervebo vaccine, that would be available to all countries for outbreak response.

In October 2020, the FDA approved its first treatment for Ebola virus: Inmazeb (atoltivimab, maftivimab and odesivimab-ebgn), a mixture of three monoclonal antibodies.

But the development of two Ebola vaccines doesn’t mean R&D should take a backseat – there is always the possibility that Ebola Reston virus, or another strain of Ebola, for which the vaccines aren't effective could mutate and spread far more easily than it currently does.

All Ebola outbreaks have so far started with a spill-over of the virus from animals to people. As with other zoonotic diseases, the key to avoiding this spill-over will mean changing the way we interact with the environment and with animal habitats. This means engaging with the sectors that drive disease emergence, such as land-use change, mining, livestock production and the wildlife trade. Some have suggested incentives to avoid bushmeat hunting, an approach that has been trialled in central Africa, that includes education to reduce the consumption of primates found dead in forests.

Containing human-to-human transmission through the use of infection control measures, including personal protective equipment (PPE), strong hygiene and sanitation measures, and robust health systems is important. Surveillance to monitor zoonotic disease transmission and the human spread of outbreaks will be key, as will ensuring a robust contact tracing system. Ultimately, the more we can contain the spread, the less chance the virus has of mutating.

For more on Ebola, here is WHO’s fact sheet: https://www.who.int/news-room/fact-sheets/detail/ebola-virus-disease