Japanese encephalitis kills one in three of its severely afflicted victims and leaves approximately a quarter of survivors permanently brain damaged. The good news: there’s a vaccine.

In Uttar Pradesh it’s called mastishk jvar, “brain fever”, and since 2005, doctors in the eastern part of the Indian state have learned to dread its arrival with the monsoon rains.

There are no antiviral treatments for JE, and while mosquito nets and repellents may help mitigate individual risk, there’s no replacement for vaccination in bringing to heel the JE burden.

From July to November that year, 5,737 people clustered in the green, paddy-puddled region near the Nepali border fell suddenly ill with symptoms typical of a brain-swelling disease. All of the patients were kids under 15, most of them younger than ten. It was the region’s largest acute encephalitis syndrome (AES) epidemic, the first big one in nearly 30 years. It would become the state’s deadliest.

Patients arrived in droves at BRD Medical College in Gorakhpur, the regional referral hospital. “Ward 6 is on eternal boil,” wrote a shocked reporter in a dispatch from the epidemic frontline. The children had high fevers, massive headaches, confusion, convulsions, vomiting. Seizures, paralysis and coma followed for many. There was little the doctors could do, other than support their charges’ failing bodies with fluids and oxygen. Tragically, 1,344 of the children would die.

For the survivors, “recovery” proved to be a relative term. “Cases who have survived show evidence of mental retardation and/or neurological deficit,” a WHO statement noted early on in the outbreak. In fact, a 2019 study conducted at BRDMedical College during a later epidemic would find that 12.5% of AES survivors would be left with “severe sequelae” – major disabilities. Only 20.7% of them would ever recover fully, without so much as the “mild sequelae” of lasting behavioural and mood shifts.

AES is a bucket term, a diagnostic container for a set of neurologically-linked symptoms that can have many causes – sometimes bacterial, other times viral or parasitic, occasionally even connected to litchi toxicity.

But in Gorakhpur, public health figures suspected what testing later proved to be true: half or more of the cases showing up at clinics were infected with one pathogen – the Japanese Encephalitis Virus (JEV), Asia’s leading cause of viral encephalitis.

JEV is a flavivirus, transmitted to humans by the bite of Culex mosquitoes who have contracted it from infected pigs or water birds – sick humans don’t develop an adequate amount of the virus to pass the bug to feeding mosquitoes. That means that pig farming areas and rice-farming regions (breeding mosquitoes and wading birds love a paddy field) tend to be at elevated risk for outbreaks of JE disease. 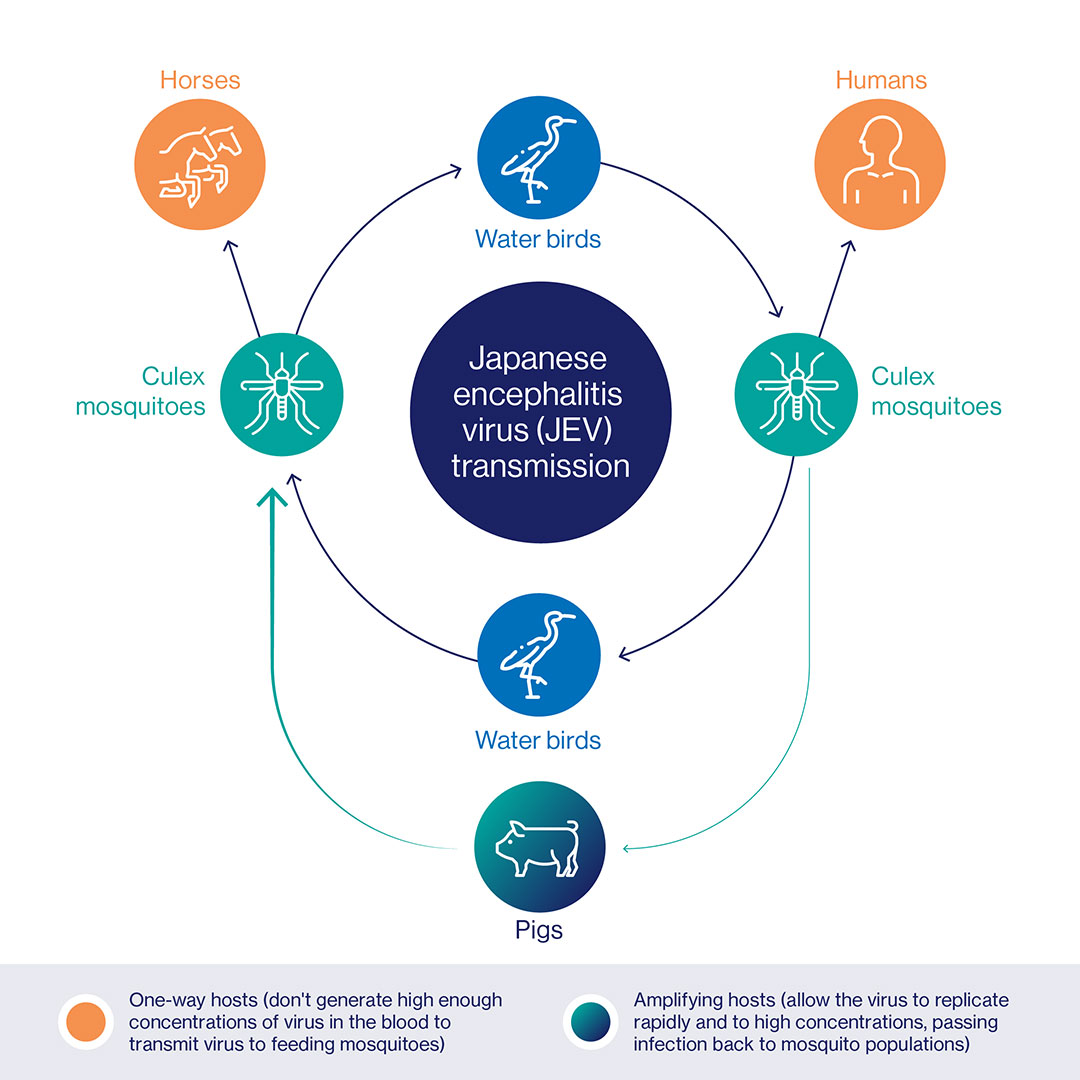 That said, incidence can be hard to predict, fluctuating considerably between cycles of transmission. A WHO literature review estimates that around 68,000 JE cases occur worldwide in a typical year (though that figure is likely an underestimate), with 75% of those cases hitting children aged 14 and younger. Approximately 15,000-20,000 people die annually. Twenty-four countries in Asia and the Western Pacific – a swathe of the world that is home to three billion people – qualify as at-risk for the virus.

Not every exposure to a JEV-infected mosquito leads to clinical JE disease, in which the virus, having replicated first in the skin and then in the local lymph glands, succeeds in evading the body’s immune ramparts and makes its way into the brain and spinal cord, causing dangerous swelling (it probably passes into the brain from the blood, though scientists have yet to pin down its route). In fact, clinical encephalitis sets in for only about one in every 250 infected people.

But when it does, it’s serious: vomiting and stomach pain lead into a phase of high fever, neck stiffness, confusion, coma, seizures, spastic paralysis, and for as many as 30% of the affected patients, death.

For the rest, the outlook is mixed. Brain damage and disability permanently change the lives of a large proportion of the disease’s survivors. WHO estimates that 20-30% of people who outlive their infection “suffer permanent intellectual, behavioural or neurological sequelae such as paralysis, recurrent seizures or the inability to speak”.

But outcomes vary between places and epidemics. A small study from Indonesia reported in 2009 that 25% of tracked children emerged from infection with enduring disabilities, and that the same proportion recovered fully. In Cambodia, one study found, 11% of JE survivors had sequelae severe enough that they were considered unlikely be able to live independently, with a further 84% reporting “mild” or “moderate” neurological after-effects. A 2010 modelling study predicted that a hypothetical Chinese birth cohort of 100,000 children – aged zero through to 15 years – would lose 3,022 disability-adjusted life years (DALYs) to Japanese Encephalitis.

The good news: infection with JEV is believed to confer lifelong natural immunity, and licensed, efficacious vaccines have been available since the mid 1950s, when a mouse-brain-grown, formalin-inactivated virus preparation developed at Osaka University was licensed for use by the Japanese Ministry of Health and Welfare.

JE had entered the medical lexicon as long ago as 1871, when the first clinical case was described in Japan. In 1924, the infectious agent was isolated from human brain tissue, again in Japan; a decade later, that agent was transfected into monkey brains, proving it to be the causative virus we now call JEV, and paving the way for the development of a prophylactic inoculation.

By the late 1950s, that first vaccine – which had a protective efficacy of 91-97.5% – was rolling out widely in Japan and Taiwan, occasioning a dramatic drop in incidence. In the 1960s, JEV vaccines “effectively eliminated the disease in Japan, Korea, and Taiwan and reduced its annual incidence in China by 10-fold”.

But the killed vaccines required multiple doses, making it complicated to distribute in the often remote, rural areas where the virus is a great threat, and relied on complex manufacturing processes. By about 2011, it was more-or-less phased out.

Approximately 15 next-generation vaccines are available today. A live-attenuated vaccine developed in China, isolated from mosquito larvae and passaged through hamster and mouse cells to weaken the virus to the point of safety, is the most widely used.

There are no antiviral treatments for JE, and while mosquito nets and repellents may help mitigate individual risk, there’s no replacement for vaccination in bringing to heel the JE burden.

“When high coverage is achieved and sustained in populations at risk of disease, JE in humans can be greatly reduced while the virus remains in circulation,” reports a WHO position paper that recommends the integration of JE vaccination into national immunisation schedules where JE is a public health priority.

In Uttar Pradesh, JE vaccination was launched in 2006 – the year after that deadliest outbreak. The state saw some reduction in all-cause AES cases in the subsequent years, with a notable reduction in the case fatality rate between 2005 and 2010.  After a spike in cases in 2017, which resulted in 654 deaths (93 provably due to JE), a renewed emphasis on JE immunisation has preceded “a continuous decline in the confirmed cases and deaths of JE and AES” in the years since.

The backdrop to both trajectories, the paper’s authors noted, were increasingly virus-friendly environmental conditions: population growth, intensified rice farming, intensified pig-rearing, shifting weather trends. Climate change, they wrote, “could not only directly increase JE vector proliferation and longevity but could also increase disease because of changing patterns of agricultural practices such as irrigation.” Natural flooding would also spur disease, as could, conceivably, changing migratory routes of water birds.

In early March 2022, Australian health authorities notified WHO of three confirmed human cases of JE – the first locally-acquired cases on the Australian mainland since 1998. By June  the epidemic had swelled to an unheard-of 40-plus cases. JEV had, by then, been detected also in more than 70 pig farms across the four states involved in the outbreak.

It did not appear to be coincidental that February and March had seen record flooding along the northeast coast of Australia. “It’s speculated from a couple of sources; possibly water birds have migrated down to follow the water, given there are larger areas of water here now, in our part of the world,” said New South Wales Agriculture Minister Dugald Saunders at a parliamentary hearing.

The bigger picture seems plain. “With accelerating climate change, we’re going to be in a world of hurt,” Tim Inglis, head of pathology and laboratory medicine at the University of Western Australia told the Washington Post, “with some of these diseases that have in the past been restricted in the tropics extending, as we’re beginning to see.” 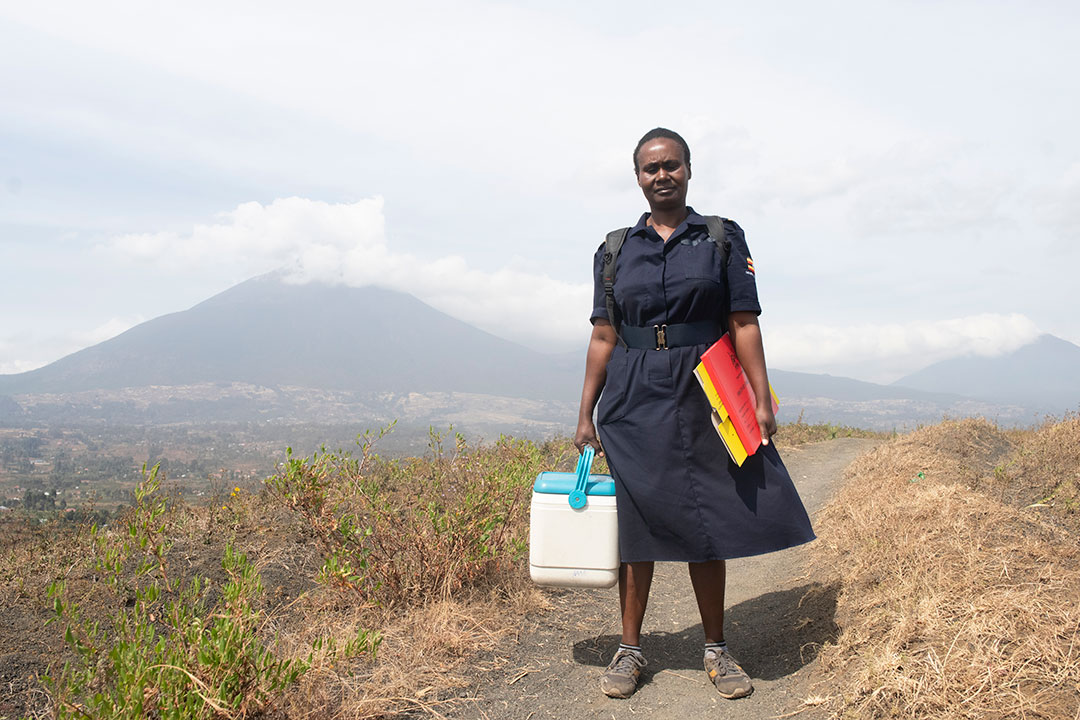