Each year around five million people die from antimicrobial resistant infections. Vaccines could help, but the current vaccine pipeline is insufficient.

Drenched in sweat, and unable to keep food down, the small boy must have been as bewildered by the gown-clad hospital staff as they were by him. He had been running a fever, vomiting, and experiencing stomach cramps and diarrhoea for several days before boarding a plane and flying for more than 14 hours back to Canada, after attending a family wedding in Pakistan. Now he was in Toronto Children’s Hospital, being assessed by a medical team.

“Drug resistance doesn’t know borders. With these extremely drug resistant infections emerging, they can go anywhere. They’re also very difficult to treat, and have the potential to undermine health systems, even in wealthier countries.”

Cases of typhoid are uncommon in Toronto, but this case was particularly perplexing, because the bacteria causing the boy’s illness appeared to be resistant to almost all antibiotics. Fortunately, the three-year-old’s bugs were susceptible to an intravenous antibiotic called meropenam, and after a further 13 days hooked up to a drip, during which his fever intermittently returned, he was eventually allowed home.

Antimicrobial resistance has emerged as one of the greatest threats to public health in the 21st century. Around the world some five million people die from antimicrobial resistant (AMR) infections each year, and that number is predicted to double by 2050. But while new antibiotics are urgently needed, scientists are increasingly waking up to the idea that vaccines could provide a powerful weapon to counter this threat – and some of them are already approved for human use.

Extensively drug-resistant (XDR) typhoid is a case in point. Even with effective antibiotics, around 21 million people catch Salmonella typhi each year, and 161,000 die. But the emergence of XDR typhoidthreatens to turn back the clock to a pre-antibiotic era.

Since the first cases were detected in 2016, Pakistan has been battling rising cases of resistant infections, with some strains now only susceptible to one oral antibiotic, azithromycin. Cases have also been detected in high-income countries, such as Canada, the US and UK. Here, the availability of more expensive intravenous treatments, not to mention good sewerage systems, lessens the immediate threat, but the propensity of bacteria to share drug resistance genes with unrelated neighbours ultimately puts everyone at risk.

Some of the first hints that vaccines might play a role in combatting AMR came from observations of how the pneumococcal conjugate vaccine (PCV-7) against Streptococcus pneumoniae – a leading cause of pneumonia, meningitis and sepsis worldwide – affected the distribution of drug-resistant strains of this bacterium. For example, following the introduction of PCV7 in the US in 2000, there was an 84% reduction in invasive disease caused by drug-resistant forms of S. pneumoniae specifically targeted by this vaccine in children under two. The campaign also reduced invasive pneumococcal disease in the over-65s by 49%, despite vaccines not being given to this group – an example of herd immunity.

In south-eastern Pakistan’s Sindh province, where XDR typhoid first became established, nearly ten million children were vaccinated in just three weeks. Since then, there has been a 66% reduction in typhoid cases there. Pakistan is now transitioning to routine TCV immunisation for all children when they are nine months old.

“The whole point of vaccines is they reduce the burden of infections overall, so that’s going to have an impact on both susceptible and resistant infections,” said Frost.

Curbing infections also reduces antibiotic use – a key driver of antimicrobial resistance. This is even true of vaccines against viruses. Antibiotics are often prescribed to treat viral infections, such as the deadly diarrhoeal disease caused by rotavirus, even though antibiotics are useless against viruses. Rotavirus vaccination is estimated to prevent some 13.6 million antibiotic prescriptions each year for children under the age of five in low and middle-income countries.

Vaccinating against viruses can also prevent secondary bacterial infections that require antibiotic treatment, such as a bacterial chest infection that develops after a bout of influenza. 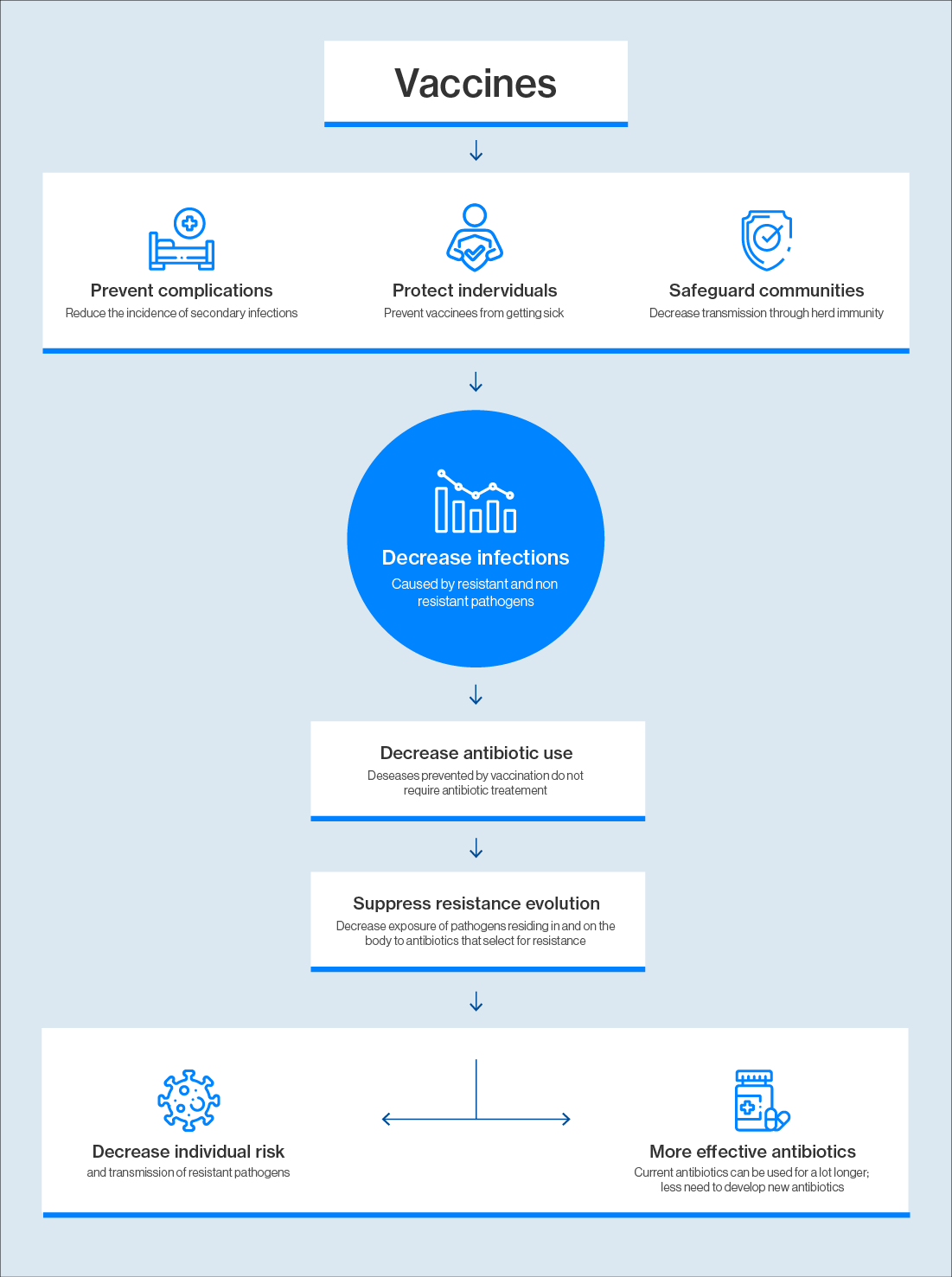 In 2015, the World Health Assembly adopted a global plan on antimicrobial resistance, which included five strategic goals. Vaccines were mentioned in two of them: reducing the incidence of infection through effective sanitation, hygiene and infection prevention measures; and increasing investment in new medicines, diagnostic tools, vaccines and other interventions. Beyond this though, there was no specific plan on how best to leverage vaccines to tackle AMR.

To fill this gap, the WHO published an action framework in January 2021, which set out strategies for maximising the impact of vaccines on AMR. “The key points are that we need to expand the use of existing vaccines, develop new vaccines for optimal impact on AMR, and expand knowledge and evidence to better understand the role of vaccines in reducing AMR,” said Mateusz Hasso-Agopsowicz, a technical officer in the WHO’s Universal Health Coverage and Lifecourse Division, and a coordinating author on the report.

The typhoid conjugate vaccine (TCV) is a good example of how an existing vaccine could be leveraged to combat AMR. Between 2016 to 2020, some 22,571 typhoid cases were reported across Pakistan, almost 70% of which were extensively drug-resistant. Consequently, in 2019, Pakistan became the first country in the world to introduce and begin mass vaccinating children with a new typhoid conjugate vaccine, which received WHO prequalification in January 2018.

“Although we’d known about the vaccine’s effectiveness for about 20 years, it hadn’t been introduced because we had antibiotics that could treat typhoid,” said Hasso-Agopsowicz. “We got to the point in Pakistan where now we have resistant disease that we can no longer treat with antibiotics, so what are we going to do? Why don’t we use that vaccine?”

In south-eastern Pakistan’s Sindh province, where XDR typhoid first became established, nearly ten million children were vaccinated in just three weeks. Since then, there has been a 66% reduction in typhoid cases there. Pakistan is now transitioning to routine TCV immunisation for all children when they are nine months old.

According to mathematical modelling by Frost and colleagues, such routine immunisation could avert 46-74% of all typhoid fever cases in 73 countries eligible for Gavi support and reduce the relative prevalence of antimicrobial-resistant typhoid by 16%. Over the next 10 years this would prevent 21.2 million cases and 342,000 deaths from multidrug-resistant typhoid.

“I think the positive message of the report is that three of the pathogens on the priority pathogen list for AMR have highly effective existing vaccines, so there is a real opportunity to reduce AMR by increasing access to them.”

So, what about other infections? Earlier this month, the WHO published an analysis of vaccines in various stages of development that could be used to prevent infections caused by bacteria considered at high risk of developing antimicrobial resistance. Licensed vaccines against some of these bacteria already exist – including S. typhi and S. pneumoniae, but also Haemophilus influenzae type b (Hib), and Mycobacterium tuberculosis –  but access to them should be expanded to maximise their impact, the report said.

Other pathogens with vaccines in late-stage clinical trials include extraintestinal pathogenic Escherichia coli (ExPEC), which is a major cause of urinary tract infections; Neisseria gonorrhoeae, which causes gonorrhoea; and Clostridioides difficile, a leading cause of hospital-acquired infectious diarrhoea. 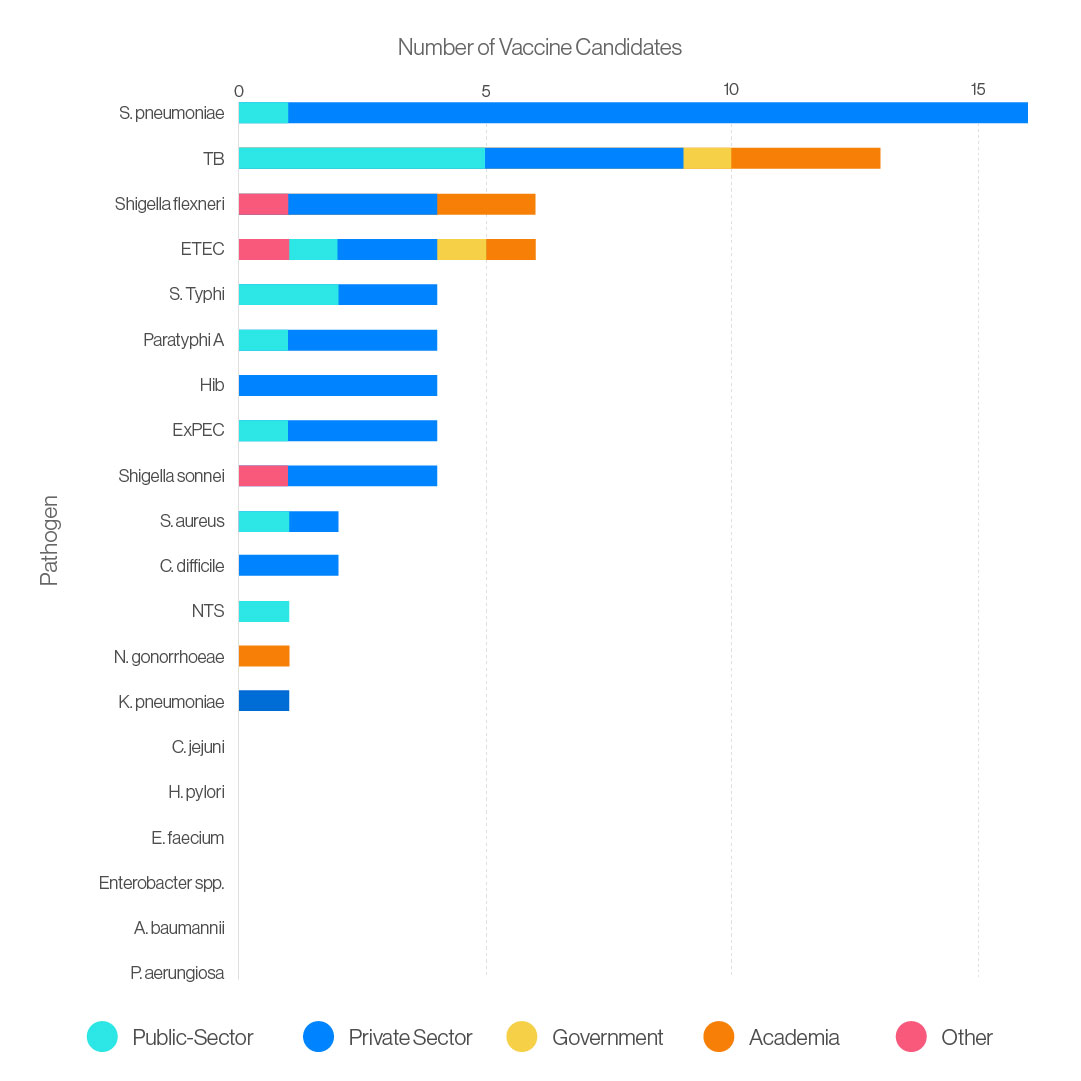 However, the vaccine pipeline for at least six high-risk bacteria is weak, and for two of them – Acinetobacter baumannii and Pseudomonas aeruginosa – there is also little chance of new antibiotics becoming available in the near future. Both can cause severe and often deadly infections such as sepsis and pneumonia in immunocompromised patients, and they have already become resistant to a large number of antibiotics.

“I think the positive message of the report is that three of the pathogens on the priority pathogen list for AMR have highly effective existing vaccines, so there is a real opportunity to reduce AMR by increasing access to them,” said Frost, who led the analysis.

Even so, further research into how to prevent such infections can’t come soon enough. Models estimate that antimicrobial resistance could result in 2.4 million deaths across Europe, North America and Australia between 2015 and 2050, with even more in low- and middle-income countries. “iI’s not like in 20 years’ time there’ll be a huge burden of resistant infections and then we’ll have to deal with it,” said Frost. “I think we’re already there.”