The science behind COVID-19
COVID-19ExplainerInnovation

A year ago, we had no COVID-19 vaccines, now we have many. Could the next generation of vaccines be better still? 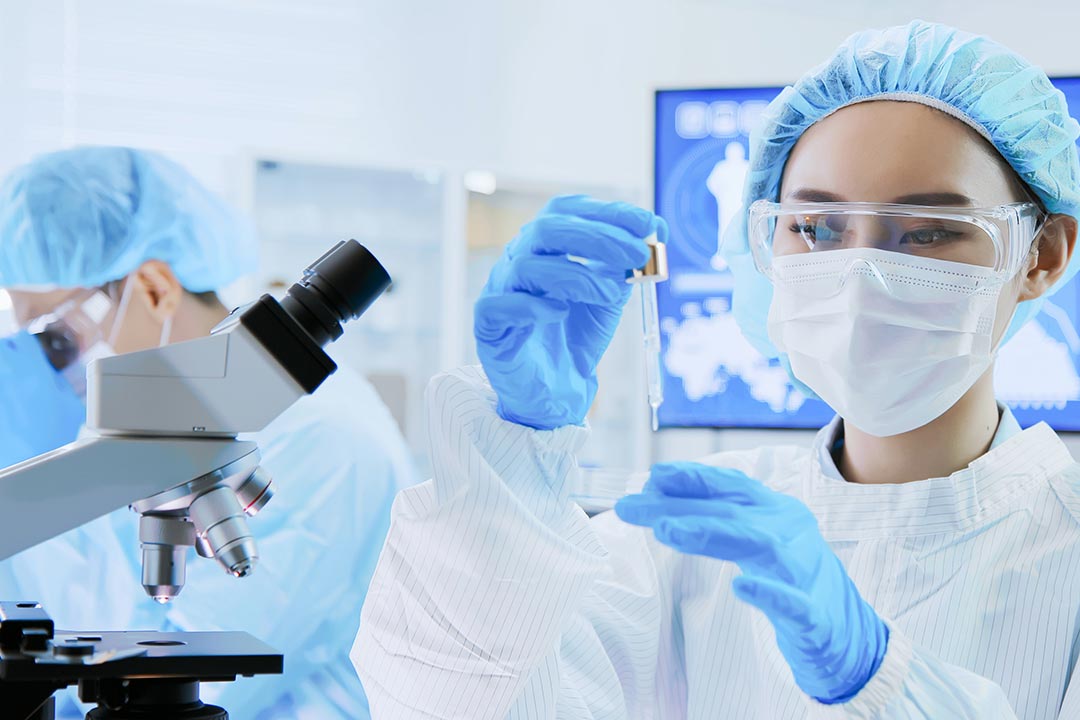 Scientists in PPE working in a lab

The first generation of COVID-19 vaccines has made a significant contribution to curbing the pandemic in those countries fortunate enough to have had ample access to them. But limited supply and storage requirements have restricted their global impact until now.

In the coming months a number of other vaccine candidates are expected to be approved for emergency use. Based on more traditional vaccine technologies, these should be easier to manufacture and distribute, improving access to COVID-19 vaccines regardless of where people live.

Further down the line, we can expect other innovations as nasal vaccines, self-amplifying nucleic acid vaccines, and vaccines that can give protection against multiple variants or strains of SARS-CoV-2 gradually become available.

Next-generation vaccines are ones demonstrating an incremental improvement on the first wave of COVID-19 vaccines in terms of their efficacy, affordability and/or programme feasibility – how easy they are to deliver into the arms of people around the world.

So far, the World Health Organisation (WHO) has granted emergency use listings (EULs) to eight vaccines, six of which are currently being distributed through the COVAX framework. These are the Pfizer/BioNTech and Moderna mRNA-based vaccines, the Oxford/AstraZeneca and Janssen (J&J) viral-vector vaccines, and the Sinovac and Sinopharm whole inactivated virus vaccines.

However, others are expected to follow in the coming months, including new types of vaccine that may be easier to manufacture and distribute.

On 4 November, the US biotech company Novavax submitted an emergency use application for its NVX-CoV2373 vaccine candidate to the World Health Organization (WHO). If approved, this would be the first protein-based vaccine to be recommended, although others may not be far behind: China-based Clover Biopharmaceuticals and India-based Biological E expected to file emergency use applications for their own protein-based vaccines to various countries in early 2022.

Protein-based vaccines are already in widespread use for other diseases, including hepatitis B and influenza, and are safe and effective. Inexpensive to produce in many cases, and only requiring refrigeration during transportation and storage, rather than freezing, they could further help to improve access to COVID-19 vaccination in lower-income countries.

Both Novavax and Clover have already signed deals for hundreds of millions of doses with COVAX, assuming they receive WHO authorisation. And the Serum Institute of India (SII) is already making Novavax doses for supply to Indonesia, which recently authorised it. It has also agreed to make doses for the Philippines, which granted an EUA for the vaccine on 17 November. Potentially, SII could further ramp up supply to expand access to the vaccine to other countries.

Other types of protein vaccine are also in the works, such as the virus-like particle (VLP) COVID-19 vaccine being developed by US-based VBI Vaccines, with funding from the Coalition for Epidemic Preparedness Innovations (CEPI). VLP vaccines are a type of protein subunit vaccine, which more closely resemble the natural way in which protein fragments are presented to the immune system. The hope is that this approach could elicit a more potent immune response.

New or different combinations of adjuvants – molecules that stimulate the immune system – are also being tested, as is the addition of  further components of the SARS-CoV-2 virus in the hope of triggering stronger and longer-lasting immune protection against it. Doing so could reduce the amount of antigen needed to elicit an immune response, meaning more doses can be made to support developing countries.

So-called ‘mix-and-match' vaccine trials, where different vaccines are used for the first, second, or third doses, are also ongoing. The aim is to investigate whether combining different types of vaccine could match or even exceed the performance of existing vaccines. Early evidence suggests it does – particularly in immunosuppressed individuals, such as organ transplant recipients. Mix-and-match regimens could also be helpful in lower-income countries, where there might be shortages of certain vaccines at different times.

Another approach could be the use of self-amplifying (saRNA) RNA vaccines. Like existing mRNA vaccines, these provide our cells with the instructions to make coronavirus proteins, but they also provide ones for making multiple copies of these genetic instructions. In theory, this should make vaccine doses smaller and cheaper. Smaller doses may also mean fewer side effects.

Human trials of saRNA COVID-19 vaccines are ongoing, and recent data from a Phase 1 trial of an saRNA vaccine being developed by Imperial College London suggested that it triggered strong immune responses with no short-term safety concerns. AstraZeneca also recently announced that it was investing in Imperial’s technology with a view to applying it across additional therapeutic areas, such as other infectious diseases or cancer. Meanwhile, CEPI is funding a saRNA vaccine being developed by US company Gritstone Bio.

Current data suggests that many of the so-called first-generation vaccines remain highly effective against existing variants of concern – particularly against severe disease. However, it’s possible a new variant will emerge that can overcome this vaccine-induced protection to some degree, with the emergence of the Omicron variant only underlining this risk. While we don’t know yet how existing vaccines will fare against Omicron, several variant-adapted vaccines are in development.

For instance, over the past few months, Pfizer, Moderna and AstraZeneca have all created updated versions of their vaccines to match variants such as Delta and have been testing them in clinical studies. They’ve also been tuning their internal workflows to ensure they could rapidly switch to manufacturing these newer versions – or future versions – if this became necessary.

For instance, Gritstone Bio’s saRNA vaccine candidate provides instructions for making the spike protein found on the surface of SARS-CoV-2, as well as additional viral antigens that offer good targets for T cells – immune cells that directly kill infected cells, rather than producing antibodies that block infection. Some of these antigens are highly conserved (similar) between coronaviruses such as SARS and SARS-CoV-2, meaning they may be able to offer some protection against future coronavirus pandemics, as well as the current one.

Although most vaccines are delivered using needles, oral and intranasal vaccines are already used to protect children against e.g. polio and influenza, and tend to be cheaper, and faster to administer – not to mention more attractive to those who are afraid of needles, which could be a significant cause of vaccine hesitancy, data suggests. They also don’t necessarily require a healthcare professional to administer them, which could be an advantage in countries where health workers are in short supply.

Delivering a COVID-19 vaccine via a nasal spray or oral vaccine might even enhance protection against SARS-CoV-2 in the very locations we need it most: the sticky ‘mucosal’ tissue lining the nose and throat, which the virus first infects. As well as helping to prevent the virus from gaining an initial foothold in the body, nasal vaccines might also help to reduce transmission, by reducing the amount of virus in these tissues among infected people.

Preclinical studies have suggested that an intranasal Covid-19 vaccine is feasible, and AstraZeneca is currently testing a nasal version of its COVID-19 vaccine in humans. Other companies are also working on intranasal vaccines of their own, as well oral versions.

For instance, CEPI recently announced that it would provide funding of US$4.3m to MigVax Ltd to support the development of an orally administered protein subunit vaccine tablet. It hopes to use a chimeric protein to simultaneously trigger three different types of immune response: mucosal immunity, antibodies in the blood, and T cells.

Yet other companies are developing microneedle patches, designed to administer COVID-19 vaccines into the skin via thousands of tiny spikes, which are small enough to avoid drawing blood or triggering pain receptors. Such patches would be easier to distribute, because they can be stored at room temperature, and could be particularly useful for communities lacking access to trained medical staff, because they could be self-administered. Human trials of one such patch are expected to begin in 2022.

Although it’s unlikely that every one of these approaches will lead to marketable products in the context of the COVID-19 pandemic, progress in vaccine innovation is moving faster than at any other time in human history. Already, the pandemic has seen a new class of vaccine – mRNA vaccines – authorised for widespread use in humans for the first time, and significantly expanded the use of viral vector vaccines, another relatively recent innovation. Most importantly, the vaccines have continued to demonstrate their safety and efficacy in the billions of people worldwide who have now been vaccinated against COVID-19.

In the coming months and years, other new technologies will enter human trials or receive regulatory approval, potentially paving new directions for other infectious diseases. So, the research taking place now may not only help to end the current pandemic, it may also enable us to respond faster to future pandemics and improve human health more broadly.