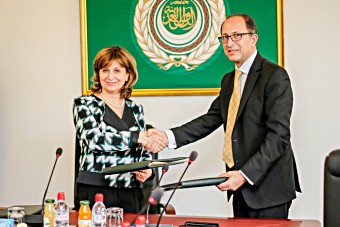 Geneva, 19 May 2015 – The Arab League has agreed to collaborate with Gavi, the Vaccine Alliance on advocating for children in the world’s poorest countries to be immunised against vaccine-preventable diseases, as part of a Memorandum of Understanding (MoU) signed between the two organisations.

The agreement – the first between the Arab League and Gavi – will support the Alliance’s 2016-2020 strategic goals. Both organisations will advocate through the education sector – parents, teachers and pupils – and society as a whole for the improvement of women and children’s health by scaling up immunisation coverage.

“We are grateful to the Arab League for its commitment to protect more children from vaccine-preventable diseases,” said Dr Hind Khatib-Othman, Managing Director of Gavi’s Country Programmes. “Together with its partners, Gavi has accelerated the introduction of new vaccines in the 73 countries it supports. Now we need to focus on reaching equity in immunisation levels and through the collaboration with The Arab League we have moved one step closer to achieving this.”

Every year, nearly 22 million children, mainly in poor countries, do not receive the full course of diphtheria-tetanus-pertussis vaccine (DTP), despite immunisation being widely recognised as one of the most successful and cost-effective health interventions. More than one in five of all children who die before the age of five lose their lives to vaccine-preventable diseases.

“This MoU is a good opportunity to strengthen the Arab League’s co-operation with Gavi, both in terms of programmes and advocacy, with the aim of raising immunisation coverage and improving vaccine programmes in member countries of the League of Arab States (LAS),” said Ambassador Dr Badre eddine Allali, Assistant Secretary General of the LAS. “It will support our broader goals working on issues relating to achieving Millennium Development Goal 4 and our engagement with the post-2015 agenda as well as tackling the outbreak of disease in LAS member countries and sharing expert advice on institutional capacity building and promoting coordination.”

Representatives from the League of Arab States and Gavi at the signing ceremony.

Between 2000 and 2013, Gavi has disbursed more than US$ 293 million to support immunisation programmes in Arab League countries. A total of US$ 625 million will be disbursed in until 2020, with Yemen and Sudan being the largest recipients.

Since 2000, Gavi has invested more than US$ 3.4 billion to introduce vaccines in 33 member states of the Organisation of Islamic Cooperation (OIC). This represents more than 50% of Gavi’s total disbursements. Gavi plans to increase support to OIC countries between 2016 and 2020.

Over the past 15 years, Gavi has helped countries immunise half a billion children, saving seven million lives. Between 2016 and 2020 Gavi plans to help immunise an additional 300 million children, leading to a further five to six million lives being saved. In January, world leaders joined German Chancellor Angela Merkel in Berlin to raise US$ 7.5 billion to ensure Gavi-supported programmes are fully funded between 2016 and 2020.