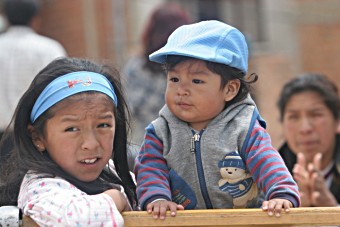 Just one and half years after Bolivia became the first GAVI-eligible country to introduce the rotavirus vaccine, a disease responsible for almost half of all hospitalisations for diarrhoea from 2006-2008, is on the retreat.

By early 2010, the number of Bolivian cases of rotavirus diarrhoea had fallen considerably. GAVI is supporting an evaluation of impact and effectiveness of rotavirus vaccines in Bolivia.

With GAVI support, immunisation against rotavirus is today offered free of charge at government health centres across Bolivia.

In 2009, over 200,000 children received the vaccine, helping the health ministry exceed its coverage targets: the first dose of rotavirus vaccine achieved 80% coverage, the second dose reached 64%.

Three years earlier, rotavirus was a major cause of morbidity and death among Bolivia's under five population.

"This initiative is too important to leave unsecured. With national funding we can guarantee its sustainability for the long term." Dr Walter Selum Rivero, Bolivia's Minister of Health

With a successful track record of introducing immunisation programmes, Bolivia was well-placed to take a lead in deploying the rotavirus vaccine.

Success in these campaigns had also boosted public confidence in health services and the power of immunisation.

At the same time, Bolivia has taken a pro-active approach to funding rotavirus immunisation and phasing out GAVI financial support. The country has co-financed the vaccine at US$ 3.50 per dose or nearly half of the total price, the highest level of co-financing among countries receiving GAVI support.

Bolivia plans to wean itself off GAVI's support entirely by 2015.

"This initiative is too important to leave unsecured," says Dr Walter Selum Rivero, Bolivia's Minister of Health. "With national funding we can guarantee its sustainability for the long term."