Children in Somalia to receive new vaccination against deadly diseases 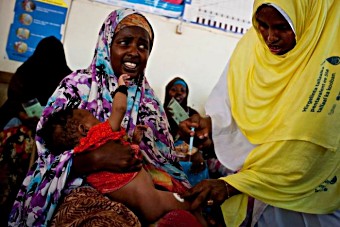 The pentavalent vaccine is delivered to a child at Medina Mother and Child Health Centre in Mogadishu. Photo credit: GAVI/2013/KateHolt

Mogadishu/Garowe/Hargeisa, 24 April 2013 – The Somali authorities launched a new five-in-one-vaccine against several potentially fatal childhood diseases on Wednesday, which could save thousands of lives.

From today, Somali children will receive the pentavalent vaccine, a combination of five vaccines in one against diphtheria, tetanus, pertussis (whooping cough), hepatitis B and Haemophilus influenzae type B (Hib) - the bacteria that cause meningitis, pneumonia and other illnesses, all of which are highly prevalent. The vaccine will be part of Somalia’s routine immunisation programme.

More than 1.3 million doses of pentavalent vaccine have been provided to Somalia for 2013 and will be used to immunise children under one year of age. Pentavalent vaccines will be delivered to the 425,000 children born each year in Somalia through existing health structures as well as community health workers at district level. Each child will require three doses of the vaccine.

Every child deserves to be protected

The launch of the new vaccine takes place in Mogadishu, Garowe (Puntland) and Hargeisa (Somaliland) and will be attended by government leaders and representatives from the GAVI Alliance, UNICEF and WHO.

“Somalia has one of the lowest immunisation rates in the world,” said Dr Seth Berkley, GAVI CEO. “The country’s health system has been destroyed after more than 20 years of conflict and thousands of children are not protected against killer diseases. This situation is unacceptable – every child deserves to be protected - and that’s why GAVI and its donors have committed substantial funding to Somalia until 2016.”

We urge all parents, community, traditional and religious leaders to participate in the immunisation activity, to ensure all children of Somalia can benefit from the protection offered.

The launch of the vaccine is being accompanied by an outreach campaign to make parents aware of the importance of the new vaccine which replaces the DTP vaccine for diphtheria, tetanus and pertussis (whooping cough).

A recent household survey carried out by UNICEF and the relevant Ministries, found only 7% of children in Puntland and 11% of children in Somaliland had received the required three doses of DTP by their first birthday.

“It is crucial that this vaccine reaches every Somali child in the country,” said Sikander Khan, UNICEF Somalia Representative. “We urge all parents, community, traditional and religious leaders to participate in the immunisation activity, to ensure all children of Somalia can benefit from the protection offered.”

1:5 children dies before their fifth birthday

Continued conflict in Somalia has resulted in the country having child and maternal mortality rates among the highest in the world; one in every five Somali children dies before their fifth birthday.

The introduction of pentavalent vaccine means that for the first time Somali children will be protected against one of the causes of pneumonia, which is one of the leading causes of child deaths. It is the first time in 35 years that children in Somalia are being offered a vaccination that protects them against additional diseases apart from diphtheria, pertussis (whooping cough), tetanus, measles, polio and tuberculosis which they already receive.

“Both Hib and hepatitis B are of public health importance,” said Dr Marthe Everard, World Health Organization Representative in Somalia. “There is little data on the epidemiologic burden of hepatitis B and Hib disease, or on the burden of diseases from meningitis or pneumonia, but data from neighbouring countries and the developing world indicate that Hib is a leading cause of acute bacterial meningitis and an important cause of severe pneumonia.”

The launch of the five-in-one pentavalent vaccine in Somalia takes place on the eve of the Global Vaccine Summit in Abu Dhabi, co-hosted by His Highness General Sheikh Mohammed bin Zayed bin Sultan Al Nahyan, Crown Prince of Abu Dhabi; Bill Gates, co-chair of the Bill & Melinda Gates Foundation; and Ban Ki-moon, United Nations Secretary-General. In partnership with GAVI, the Summit will celebrate progress in immunising children against polio and other life-threatening diseases.

The launch coincides with World Immunization Week as well as the African Vaccination Week. During this week, UNICEF and WHO will conduct a nationwide polio immunisation campaign in Somalia to protect children from life-long paralysis caused by the disease.