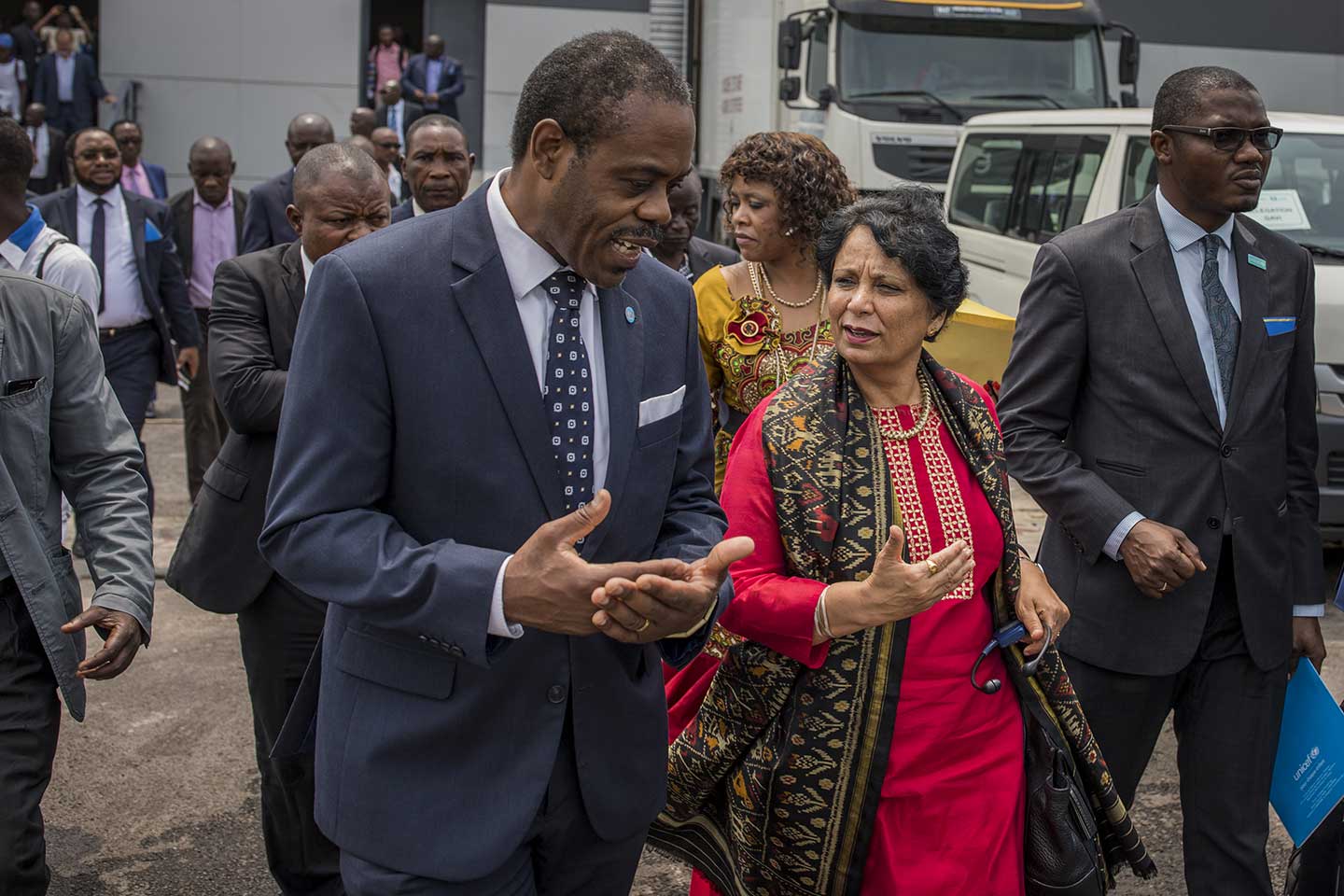 Kinshasa, 11 October 2018 – A quarter of a million more children in the Democratic Republic of Congo (DRC) are set to be protected against some of the world’s deadliest diseases following the launch of a major new boost to the country’s routine immunisation programme.

The Emergency Plan for the Revitalisation of Routine Immunisation in the DRC, named the Mashako Plan after former DRC Minister of Health Professor Leonard Mashako Mamba, aims to raise routine immunisation coverage by 15 percentage points over the next 18 months, meaning 220,000 children that otherwise wouldn’t have will receive lifesaving vaccines.

“Vaccination is the most cost effective public health intervention,” said Dr Oly Ilunga Kalenga, Minister of Health of DRC. “When children get vaccinated, they are protected against all sorts of preventable diseases that would otherwise prevent them from developing their full potential. Yet more than one million Congolese children are still not completely vaccinated. The ambitious Emergency Plan for Routine Immunisation will be a game-changer. It is an honour to name this plan after the late Dr Mashako, a true visionary who transformed the Congolese health system.”

In 1999, just 25% of children born in the DRC received basic Diphtheria, Tetanus, Whooping Cough vaccine (DTP3). After nearly 20 years of Gavi support, that figure has grown to 81%. In the same period child mortality has shrunk from 165 to 91 children in every thousand dying before their fifth birthday. Vaccines to protect children from measles, diphtheria, pertussis, tetanus, hepatitis B, Haemophilus influenzae, pneumococcal and polio are now delivered by the country’s routine immunisation programme.

Despite this progress, the DRC still has one of the highest rates of child mortality worldwide and 1.8 million children miss out on a full course of vaccines every year. As a result the country has seen major outbreaks of measles, polio and yellow fever – all vaccine-preventable diseases – in recent years.

“Hundreds of thousands of children are alive today thanks to the work the DRC government, working alongside Gavi and our UN partners, have done to boost vaccine coverage across the country,” said Anuradha Gupta, Deputy CEO of Gavi, the Vaccine Alliance, who joined Minister Kalenga at the launch in Kinshasa. “Yet there are still far too many children missing out on vaccinations and, as a consequence, still too many families suffering the unimaginable grief of losing a child from a preventable disease. That is why this plan is so important, and why Gavi will offer its full support to help achieve it.”

“The Mashako Plan is an initiative received with great interest by partners supporting health activities in DRC,” said Allarangar Yokouide, WHO Representative in DRC. “This is an opportunity to strengthen the collective immunity of the Congolese population by increasing immunisation coverage by immunising each child wherever they are.”

According to the WHO Representative, the success of the implementation of this emergency plan will depend mainly on its ownership by the government, the commitment made by the State and its development partners. “For our part,” the WHO Representative continued, “commitment of technical and financial partners is crucial to the successful implementation of this plan to revive routine immunisation. It is necessary to define an accountability framework with a clear definition of the roles and responsibilities of stakeholders and close monitoring of activities by political and administrative actors in order to improve immunisation coverage for target persons.”

To help deliver the Mashako Plan, on Wednesday 10 October the DRC Ministry of Health, with funding from Gavi and support from UNICEF, opened one of Africa’s largest vaccine storage facilities. The Kinkole immunisation hub, just outside Kinshasa, has nearly 6,000m3 of vaccine storage space.

The plan will also include several innovations to improve vaccine coverage in the eight provinces, such as performance-based funding and smartphones will be used to aggregate data and target low-performance areas. Regular coverage surveys will be included to target performance.