Emmanuel Lansana, outpatient supervisor at Monrovia’s Redemption Hospital, became one of the lead contact tracers during the Ebola outbreak. Given his high-risk status, he was also the first person in Liberia to receive the new vaccine against Ebola. This is his story.

Fear was unavoidable. Fear was the hallmark. Always at the back of our minds. It was really tough, because the cases were too many. The cases overwhelmed the health facilities. People would call and you’d say there’s no space. So the families used to come and just drop them outside Redemption Hospital and then leave. Sometimes they would leave more than 15 dead bodies at once. They were dying in every home. It was quite terrible.

At the peak of Ebola, Redemption Hospital suffered a heavy blow and health services collapsed. The medical director responsible for the hospital died of Ebola. We had nurses, physician assistants, nurse aids, medical doctors dying from Ebola. It was quite terrifying. Everyone was afraid and ran away. But I was still available. So I thought that the best thing I could do was to help my country; I had the knowledge for contact tracing. Let me use this, instead of sitting and being afraid. So I volunteered to take the lead. 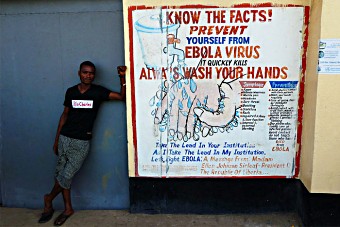 When someone came to the hospital with fever, vomiting, diarrhoea, sometimes bleeding we would immediately go to their home and complete the case- base investigation form. We would then submit this to the ministry. In that form we listed all those who had come into contact with the person. That included the name, the age, address and occupation of those people. So for a single case of Ebola we would have to trace a minimum of 15 contacts. In the zone I was assigned people lived in clusters. You have one house with five, six or even eight families. Each family has up to seven or eight members. So if there’s a house of that nature, then you sometimes have to trace up to 50 contacts.

Tracing contacts was a very challenging task. We were afraid of getting Ebola and we didn’t want to enter the homes. In some communities, we were targeted, because people felt that we were trying to make up a story that their relative had Ebola. Many were in a state of denial. Sometimes we even had to contact the Liberian National Police, to prevent families from taking a body and burying it.

I was really, really worried. And my team was worried. I had to encourage them. If we had got afraid and didn’t do anything about this and didn’t intervene, what would happen? We could also get infected, it might spread to our families, our friends and our relatives. My family didn’t want me to go out. I said no, I’m a health worker I have to go out, to save the population. Someone has to take the lead.

The early symptoms of Ebola are like symptoms of malaria. So when one begins to experience fever, headache, joint pains, the first thing that comes to mind is “I must have malaria”. The introduction of the thermal scan helped us a lot. Before then, someone could be having fever and they say “No, I’m okay”, but you could see clinically this person is not okay. But then the thermometer was introduced and we started using it in the field.

When people have fever, then you can start to tell them “You are not well, your temperature is high. You have been in contact with someone who has been admitted to the Ebola Treatment Unit (ETU) or someone who has died. So it’s very dangerous if you start developing symptoms and you hide the sickness, because you are exposing other family members. So the earlier you go to the ETU the better it is for you.”

It was a strange disease for Liberia. We had not experienced Ebola before. We were not prepared to fight it. Whenever someone is sick in Liberia, everyone comes round and touches the person, and that’s one of the reasons why Ebola spread. When patients were brought to this hospital, health workers came into contact with these patients without protection. We were not used to wearing gloves, wearing gowns or boots in the hospital. That’s how a lot of our co-workers in the hospital died.

We had nurses, physician assistants, nurse aids, medical doctors dying from Ebola, a lot of them. So it was quite terrifying.

Because our co-workers were dying the rest of us were afraid, nobody wanted to touch a patient again. You and a colleague work together today and then two or three days later he is dead. You are afraid, but the patients were still being brought to the hospital. Later we were trained in how to behave and given equipment to wear, masks, gowns and boots, things we never knew about before. Later partners came in and started constructing ETUs.

The decision to be the first to take the Ebola study vaccine was made when suddenly I started thinking back on the number of family members, the number of friends, the number of health workers, the number of community persons that died from Ebola. I knew that I was exposed because I was doing contact tracing. I was afraid because I didn’t know what the effects of the vaccine would have been, but I decided that I needed to take part in this study to benefit. Seeing as I took the lead on contact tracing I also wanted to take the lead for the Ebola vaccine, even though this was a study. Since I took it I’ve been feeling very well. I am so grateful.