DRC government officially declares end of outbreak following the vaccination of over 3,000 people 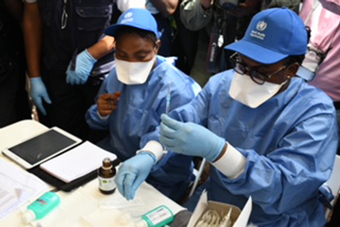 Geneva, 25 July 2018 – The first use of a vaccine to help contain an Ebola outbreak has been encouraging, Dr Seth Berkley, CEO of Gavi, the Vaccine Alliance, said as the outbreak in the Democratic Republic of Congo (DRC) was officially declared over.

The DRC government formally declared the Ebola outbreak over on Tuesday 24 July after no new cases were reported for 42 days. From the 4 April through 9 July there were 54 confirmed cases of Ebola reported, with 33 deaths. A total of 3,300 people received investigational doses of the vaccine as part of a ring vaccination protocol – the same used to eradicate smallpox.

The vaccination was implemented by the Government of DRC and partners including WHO, which supported national authorities in coordinating the international health response, and Medecins Sans Frontieres (MSF). Gavi provided $1 million towards the vaccination effort.

“As soon as Ebola moved from isolated rural areas into Mbandaka – a major town and regional hub – there was justified concern that this outbreak could spiral out of control,” said Dr Berkley. “It took months of hard work by a global coalition of UN agencies, NGOs and governments, led by the DRC government with WHO support, to carry out the surveillance, containment, contact tracing and public education needed to contain and defeat Ebola. This was the first time a vaccine was used as part of this wider response and it is encouraging that there were no cases of Ebola among those given the vaccine. We also now have valuable experience of how this vaccine can be used effectively in the field.”

The vaccine has gone through Phase 3 trials, which showed the vaccine to be safe and highly effective, but has not yet been licensed by relevant regulatory authorities. While the vaccine goes through the licensing process, an agreement between Gavi and Merck, the developer of the Ebola vaccine, ensures that 300,000 investigational doses of the vaccine are available in case of an outbreak. It is these doses that were used in the DRC.

This agreement, an Advance Purchase Commitment announced in January 2016, is the first of its kind. It was designed to incentivise the rapid development of the vaccine as well as guarantee investigational doses are available while licensure is being secured. Gavi committed US$5 million to buy doses of a fully licensed vaccine as and when it becomes available. In return, Merck agreed to create the emergency stockpile.

“I’m proud of the work Gavi has done to make investigational doses of this vaccine available,” continued Dr Berkley. “Although the emergency stockpile remains available in case of any future outbreaks, we now need to work hard to ensure this vaccine is licensed as quickly as possible.”

Background on the vaccine and the Advance Purchase Commitment