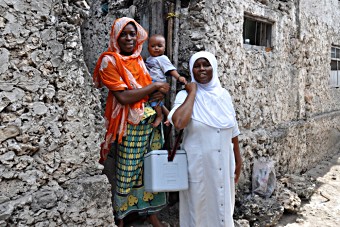 Geneva, 7 November 2013 – The GAVI Alliance has welcomed Germany’s continued commitment to help immunise children in the poorest parts of the world.

At the GAVI Mid-Term Review held in Stockholm, Sweden, the German Government reaffirmed its intention to continue funding GAVI with at least €30 million a year until 2015.

"The GAVI Alliance has successfully translated the ambitious goals of its strategic planning into remarkable successes benefiting to millions of children in the poorest countries of the world”, said Ursula Müller, Director-General of the Federal Ministry for Economic Cooperation and Development (BMZ).

Germany’s confirmation of support came during a Ministerial Session on Sustainable Finance at the Mid-Term Review. GAVI and developing countries rely on predictable funding to enable them to plan vaccination programmes and work to lower the prices of vaccines.

The continued German funding was first announced at the Global Vaccine Summit in Abu Dhabi in April 2013. On this occasion, Hans-Jürgen Beerfeltz, State Secretary of the BMZ said: "Germany's contribution to GAVI is an important part of our efforts for better child health. In view of our good cooperation, we are planning to continue our support in the coming years.”

Germany has also announced that this funding will partly be used for targeted catalytic support for GAVI’s programmes in the East African Community (EAC): €20 million will benefit children throughout the region.

“We are very grateful to Germany for its continued commitment to protecting children in developing countries,” said GAVI CEO, Dr Seth Berkley. “As a crucial partner of the Muskoka Initiative for Maternal, Newborn, and Child Health, Germany’s support to GAVI’s programmes in the EAC will make a significant contribution to improving the health of children and giving them a better future.”

Since 2011, the German development bank KfW, has helped to finance in Tanzania – on behalf of the BMZ and with public funds – the introduction of the five-in-one pentavalent vaccine in routine immunisation through GAVI. In 2012, more than1.6 million Tanzanian children were immunised against five potentially deadly diseases with this vaccine: diphtheria, tetanus, pertussis, hepatitis B and haemophilus influenzae type b (Hib).

Last December, Tanzania, Germany and the GAVI Alliance reaffirmed their partnership, and supported the addition of pneumococcal and rotavirus vaccines, two more life-saving vaccines in Tanzania. These vaccines protect against two of the major killers of children worldwide, pneumonia and severe diarrhoea.

Germany’s targeted funding will help expand its pilot approach with Tanzania to the rest of the EAC to improve immunisation rates regionally. Together with funding from other donors and co-financing from the countries themselves, the support will benefit the health of children in Kenya, Uganda, Tanzania, Rwanda and Burundi.

At an EAC partner’s immunisation and vaccines meeting held in September 2013 in Arusha, Tanzania, EAC Secretary General Dr Richard Sezibera welcomed the continued collaboration and support from the German government in strengthening and expanding immunisation in the region, saying:

“The new €20 million German support for EAC regional immunisation programmes will be implemented in collaboration with the GAVI Alliance, contributing towards the implementation of the resolutions and commitments of the 5th GAVI Alliance Partners Forum that was held in Dar es Salaam, in December 2012.”

At the same meeting, Dr Norbert Kloppenburg, member of the executive board of KfW, added:

“The German support to immunisation programmes underlines our wish to further strengthen the long-standing and deep relationship with the East African Community to contribute to the well-being and prosperity of its people.”

The first of a series of consultations between the EAC’s member states and its partners on the improvement of vaccine supply chain management took place during that meeting. In addition to the commitment in the EAC, the German government supports the development of GAVI’s Supply Chain Management Strategy with €200,000 to ensure vaccines get as efficient and safe as possible from the manufacturers to the children in developing countries. By this means GAVI aims to ensure that vaccines are available, safe and effective.