Republic of Korea contributes to the GAVI Alliance's ambitious target to save 4.2 million lives by 2015 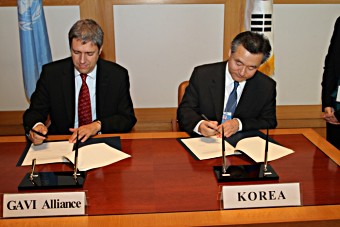 Julian Lob-Levyt, CEO, GAVI, and Sul Kyung-hoon, Director-General for Development Cooperation, Republic of Korea, sign the two-page "contribution arrangement" on the sidelines of the UN MDGs summit at the Republic of Korea's Ministry of Foreign Affairs and Trade, New York.

New York, 22 September 2010 - The GAVI Alliance has welcomed a US$ 1 million contribution from the Republic of Korea, the first Asian donor to support the Geneva-based global health partnership whose work on immunisation has saved 5.4 million lives in the past 10 years.

An innovative public-private partnership, the GAVI Alliance aims to help developing countries immunise more than 240 million children by the end of 2015 to save 4.2 million lives, but needs to find another US$ 4.3 billion to do so.

"We are delighted that the Republic of Korea has chosen to become a donor to GAVI and look forward to deepening our relationship in the months and years ahead," said GAVI CEO, Julian Lob-Levyt.

The contribution was announced in New York on Wednesday at the UN summit on accelerating progress to reach the Millennium Development Goals (MDGs).

Dr Lob-Levyt signed a two-page "contribution arrangement" on the sidelines of the UN summit with Sul Kyung-hoon, Director-General for Development Cooperation at the Republic of Korea's Ministry of Foreign Affairs and Trade.

Once an aid recipient itself, the Republic of Korea received a total of US$ 13 billion in foreign assistance between 1945 and the late 1990s, according to the Organization for Economic Cooperation and Development (OECD).

But the 49 million population country is now expanding its development assistance, the latest G20 nation to support the GAVI Alliance.

In November, The Republic of Korea will host a G20 summit which will consider financial stability together with sustainable economic growth and development.

Widely credited with developing groundbreaking approaches to financing development, the GAVI Alliance has offered to share with the G20 key lessons learned from its innovative financing vehicles, the Advance Market Commitment and the International Finance Facility for Immunisation.

These innovative financing models contribute towards GAVI's work on immunisation, which saves health costs in the long run and represents excellent value for money, experts say.

A 2005 Harvard University study showed immunisation can provide economic returns on investment of as much as 18 %, higher than many other development interventions.

New vaccines against pneumococcal disease and rotavirus which cause pneumonia and severe diarrhoea respectively could dramatically reduce the number of child deaths in developing countries.

Pneumonia and diarrhoea are the leading causes of child mortality, together accounting for nearly 40 % of all child deaths. In 2008, some 8.8 million children under the age of five died prematurely.