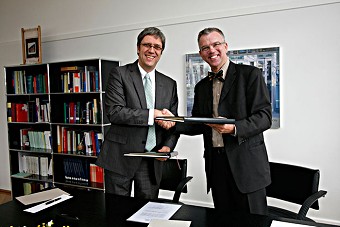 Berne, 23 June 2009 - The GAVI Alliance, which has been hosted by UNICEF since it was launched in 2000, has become an independent international institution - the first organisation to receive such recognition under the new Swiss Host State Act.

Under the headquarters agreement signed today on behalf of the Federal Council of Switzerland by Ambassador Paul Seger, Director of the Department of Public International Law, the Geneva-based GAVI Alliance enjoys privileges and immunities similar to those enjoyed by other intergovernmental organisations in Switzerland.

The agreement was co-signed by Dr Julian Lob-Levyt, Chief Executive Officer of the GAVI Alliance at a special ceremony in Berne.

"We are very grateful to the Swiss government for hosting the GAVI Alliance Secretariat," said Dr Lob-Levyt.

Switzerland has shown its full support for our mission to save children's lives and protect people's health by increasing access to immunisation in the world's poorest countries.

The GAVI Alliance is public-private global health partnership committed to saving children's lives and protecting people's health by increasing access to immunisation in 72 developing countries. It brings together all the main actors in immunisation including developing country and donor governments, the World Health Organization, UNICEF, the World Bank, the vaccine industry in both industrial and developing countries, research and technical agencies, civil society organisations, the Bill & Melinda Gates Foundation and other private philanthropists.

GAVI support consists of providing life-saving vaccines and strengthening health systems. Since 2000, GAVI has disbursed US$ 2 billion enabling 213 million additional children to be vaccinated and more than 3.4 million premature deaths to be averted.

The GAVI Alliance Secretariat at Chemin de Mines in Geneva hosts more than 75 Swiss and international staff, many of whom are recognised as world authorities in their field.