Ghana rolls out vaccines against top two killers of children 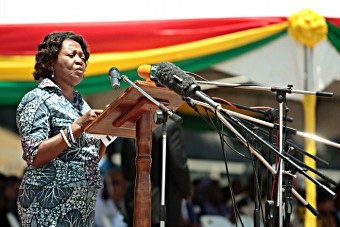 Globally, pneumonia and severe infant diarrhoea together take the lives of more than 2.7 million children under the age of five each year. In Ghana, these killer diseases together account for approximately 20% of the country’s under-five child mortality.

“Today is a great day for Ghanaians as we have the opportunity to improve the lot of our children, who are our greatest resource. The future of our country lies in our children,” said the First Lady, who also gave one of the first rotavirus vaccine doses at the ceremony in Independence Square.

“Our children have been dying from these vaccine-preventable diseases for too long, but this moment begins a major fight back,” said Health Minister Hon. Alban S. K. Bagbin. “With these vaccines, we want to, and we will, achieve MDG4, the two-thirds reduction of our child mortality by 2015.”

Ghana’s historic rollout today marks a new milestone in a global initiative to reach children in developing countries with vaccines against the leading childhood killers. Pneumococcal and rotavirus vaccines have respectively reached 17 and six GAVI-supported countries in the last couple of years, and are expected to reach more than 40 countries by 2015. 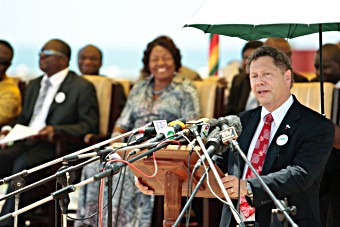 “With the hard work and effort that has gone into this double launch, Ghana has established itself as a pioneer in the fight against pneumonia and diarrhoeal disease,” said GAVI CEO Seth Berkley, MD. “Today’s simultaneous launch marks yet another ambitious and encouraging step to make life-saving vaccines rapidly and efficiently available to the children who need them the most wherever they are born.”

The vaccines have been financed with generous contributions from GAVI donors and co-financed by the Government of Ghana. More than 400,000 Ghanaian children will be immunised against pneumococcal disease thanks to a £1.5 million contribution by JP Morgan, which was matched by the UK through the GAVI Matching Fund for a total contribution of £3 million.

Ghana’s commitment to public health through immunisation has been consistently improving since 1978 when the Expanded Programme on Immunisation was launched.

“Immunisation rates for infants in Ghana now stand at over 90%,” said Dr Anarfi Asamoa-Baah, Deputy Director-General for WHO. “In addition to the strong routine immunisation programme, the country also conducts supplemental immunisation activities to reduce the incidence of diseases such as polio, measles and yellow fever.”

By preventing disease, Ghana’s double launch will also prevent the time and cost of expensive medical care and treatment, contributing to poverty reduction and a growing economy. Treating rotavirus diarrhoea among children in Ghana, for example, costs the West African nation an estimated US$ 3.2 million per year. 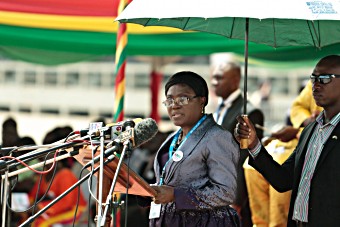 “The potential lifesaving impact of pneumococcal and rotavirus vaccines is enormous. However, at the heart of any successful intervention is positive behaviour change within communities,” said UNICEF Country Representative Dr Iyabode Olusanmi.

“To ensure that children’s lives are saved, parents need to acknowledge that vaccination is good for their children’s health, that they should complete their vaccination calendar. By doing so, we will in turn increase demand for immunisation, improve attitudes and practices and positively influence social norms that will promote sustainable change,” she added.

The rollout was also made possible thanks to the close collaboration of all GAVI Alliance members including innovative partnerships with manufacturers to make vaccines available sooner for children in developing countries and at a fraction of the price charged in industrialised countries.