Historic partnership between Gavi and India to save millions of lives 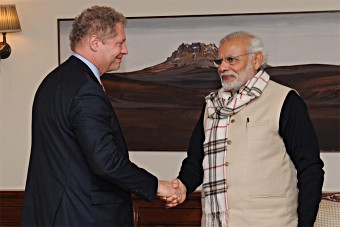 New Delhi, 6 January 2016 – The Government of India and Gavi, the Vaccine Alliance, have today announced a partnership that will help save the lives of millions of Indian children through increased access to vaccines.

India is due to begin transitioning away from Gavi support from 2017 and is expected to begin fully self-financing all its vaccine programmes by 2021. Under the partnership strategy, Gavi will provide up to US$ 500 million between 2016 and 2021 to support India’s immunisation programme, after which India will completely transition out of Gavi support. The new partnership will accelerate the introduction of modern, highly-efficacious vaccines in India, protecting children against the leading causes of disease, including pneumonia and severe diarrhoea, which combined claim the lives of more than 200,000 Indian children under the age of five every year.

Support will also be made available for the measles-rubella combined vaccine. This vaccine protects children against measles, a highly infectious disease that kills almost 30,000 children in India every year, as well as congenital rubella syndrome, which causes severe deformities and disabilities through the spread of the virus from pregnant women to their babies. Gavi will also provide future assistance for India to introduce the human papillomavirus vaccine, should the Government approve its introduction. This vaccine protects women against the leading cause of cervical cancer, a disease that kills 70,000 Indian women every year.

Through this new partnership Gavi-supported vaccines administered between 2016 and 2021 are expected to prevent several hundred thousand deaths. By helping to establish these vaccines in India’s routine immunisation schedule and by strengthening existing immunisation and health systems to extend coverage and improve access, millions of children will benefit from the work being undertaken now for generations to come.

The Government of India already has a priority of reaching every child with vaccines, as is evidenced by its new Mission Indradhanush initiative, which aims to reduce the number of children who get sick or die from preventable diseases by ensuring that the number of infants receiving all vaccines included within the Universal Immunisation Programme (UIP) exceeds 90% within the next five years. Through the modernisation and strengthening of health systems under this new partnership, Gavi support will also help towards this goal and help engage with a broader community of stakeholders within India.

“One sixth of humanity resides in India, equivalent to 30 or 40 other poor countries. Therefore, preventing disease in India will have a truly global impact,” said Prime Minister Narendra Modi. He went on to say that Indian innovation can make a difference not only in India but across the globe.

“Together with WHO and UNICEF, Gavi’s support will help India to turbo-charge its immunisation programmes, protecting more children more quickly,” said Gavi CEO Dr Seth Berkley. “I applaud the Government of India, in particular the leadership of the Prime Minister and the Health Minister, for taking such a bold position on immunisation and for recognising the role it has to play in protecting India’s children, and I am pleased with the part the Vaccine Alliance is playing as a partner in this important work.”

Despite India’s recent successes in eliminating polio and neonatal tetanus, the country is home to four million under-immunised children, about a fifth of the total among Gavi-supported countries. Gavi and its partners will provide targeted support to help India’s immunisation system identify and reach children who are not receiving vaccines, including exploring how India’s vast number of polio workers can support uptake of other routine vaccines, such as the 5-in1 pentavalent vaccine and these new vaccines.

Currently 60% of all Gavi-procured vaccines are manufactured in India. Through the partnership, Gavi and the Government of India will work more closely together to help create a more sustainable global and domestic vaccine manufacturing base within India. This will be crucial to ensuring sufficient vaccine supplies are available for the 27 million children born in India every year, and children living in all 72 other Gavi-supported countries.