Immunisation is generally known as one of the most gender-equal health interventions. But did you know that empowering women means more children – both boys and girls – get access to vaccines? 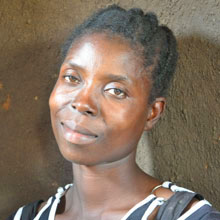 When 11-month-old Boniface started coughing and struggled to breathe, his mother, Christina Banda, took him straight to the village clinic. Realising the gravity of his condition, the health worker told her to go to the health centre immediately.

With her husband at the market, Christina had no choice but to set off on foot. “Four hours later, when we were close to the clinic, Boniface started to cry. I thought he was hungry so I took him off my back to try to feed him. Suddenly he stopped moving,” she recalls.

If Boniface had been vaccinated, he may have escaped his fatal attack of pneumonia altogether. But his fate also illustrates a problem facing many women in developing countries. While they tend to have the main responsibility for ensuring children’s health, they often lack the freedom, money and transportation that allow them to do it.

“Gender barriers” of the kind that stopped Christina from getting to the clinic on time are an important reason why children – both boys and girls – often go unimmunised.

While a 2010 study by WHO showed boys and girls are vaccinated at similar rates in most countries, it identified a range of different factors that inhibit women’s ability to access healthcare for their children. In addition to lack of decision-making power, money and transportation, gender barriers may include low levels of female education or illiteracy, limited privacy at the health clinic and burdensome household chores. In urban areas, in particular, clinic opening hours often clash with women’s working hours.

The WHO study showed that empowering women and improving their status in the family is critical to improving child vaccination coverage. The Gender Development Index, which measures the level of gender equality in different countries, provides further proof: a high score has a strong positive association with vaccine coverage.

It is important to encourage both men and women to take responsibility for children’s health. According to the study, making women the primary target of information campaigns merely perpetuates the idea that taking children to be vaccinated is a woman’s job – even if she doesn’t have the power or means to do so.

Lack of female education lowers awareness of the benefits of vaccination

Women not allowed to leave the home without a male chaperone

No time to visit the health clinic because of household chores

Information targets women only, even though it is often men who make decisions about the family

Breaking down the barriers 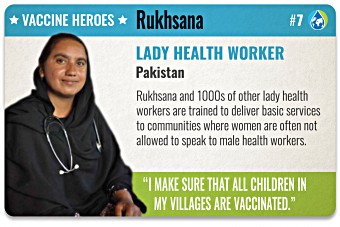 “When the vaccinators announce their arrival every month, I go door-to-door to bring children who are due to get their shots,” says Rukhsana, who was recently trained as a lady health worker. “I make sure that all children in my villages are vaccinated.”