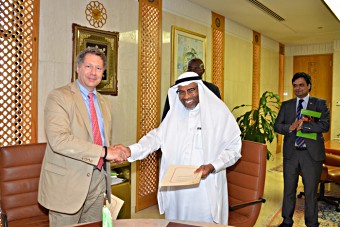 Jeddah, 11 March 2013 – The GAVI Alliance and the Islamic Development Bank (IDB) today signed a Memorandum of Understanding (MoU) at the IDB Headquarters to help save children’s lives by accelerating the introduction of life-saving vaccines in IDB member countries.

According to the MoU signed between Dr Ahmad Mohamed Ali, Chairman, IDB Group, and Dr Seth Berkley, CEO, GAVI, the IDB will work closely with GAVI to help secure sufficient funds for immunisation.

By 2020, GAVI plans to vaccinate more than 400 million children in at least 29 member countries with the objective of preventing 3.2 million deaths. An estimated US$ 7 billion will be required to reach this target.

“We are joining hands with the IDB to accelerate the introduction of life-saving vaccines in IDB member countries and ensure that children have a healthy start in life,” said Dr Seth Berkley. “We also aim to increase the uptake of new and underused vaccines in these countries and hopefully generate new sources of funding.”

On the occasion, Dr Ahmad Mohamed Ali stated that promoting health is among the major strategic thrusts of the Vision 1440H (2020) of the IDB Group and that it was happy to enter into a cooperation agreement with GAVI to save the lives of millions of children in member countries, thereby playing a major role against child mortality.

He mentioned that in the initial stage, IDB will try to support the governments of selected member countries to implement the vaccination programme through its “triple win financing model” in which it will seek collaboration with other partners while also providing the recipient countries the opportunity to contribute a portion of the cost along with IDB.

This kind of tripartite partnership will ensure country ownership as well as sustainability of funding in the long term.

Since it was founded in 2000, GAVI has helped around 33 member countries of the IDB introduce vaccines against yellow fever, hepatitis B, meningitis and Haemophilus influenzae type b (Hib) disease.

Vaccines against two of biggest killers of children

With support from the IDB, GAVI expects to roll out vaccines against two of the biggest killers of children in developing countries – diarrhoea and pneumonia – as well as new and underused vaccines, including human papillomavirus (HPV) against cervical cancer, Japanese encephalitis, typhoid and rubella.

The IDB intervention in the health sector has surpassed over US$ 2 billion since inception, with over 30% approved during the last three years (2010-2012). The Bank’s Islamic Solidarity Fund for Development (ISFD) is the arm dedicated for supporting poverty reduction interventions with focus on health of the poor.